This month, the Fish Friday Foodies, with Karen of Karen's Kitchen Stories, is serving up a virtual La Vigilia which is short for La Vigilia di Natale. You can read more about that in my round-up I'm sharing for the event at the end of the week. For my sixth course, as a palate cleanser between the savories and dessert, I am offering a semifreddo.

It literally means half-cold...and because I procrastinated till the last possible day to make and post this, my time was short and it was a little less than half-cold. But, according to my taste-testers, it was delicious nonetheless! I love the combination of sage and honey, so I had the Enthusiastic Kitchen Elf pluck a few different sages from his garden for me. 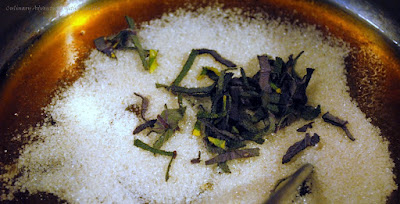 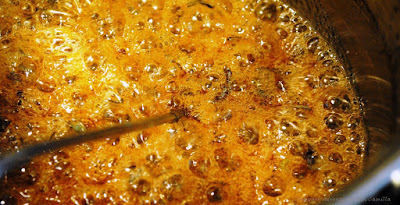 Sprinkle gelatin over 2 T water in ramekin and let stand to soften. In a large mixing bowl, beat whipping cream until it holds peaks. Then chill while you prepare the remaining steps.

Bring to a boil over moderate heat, stirring occasionally until the sugar is completely melted. Then boil, without stirring, until mixture reaches 238°F on a thermometer, approximately 4 to 5 minutes.

Beat egg yolks in a medium bowl until they are thickened and pale, approximately 2 to 3 minutes. Carefully pour the hot honey mixture in a slow, steady stream into the yolks. Immediately add gelatin mixture to the hot honey and eggs, swirling until dissolved. Continue to beat until mixture is pale, thick, and completely cool, approximately 4 to 5 minutes.

Fold whipped cream into honey mixture with a rubber spatula until just combined. 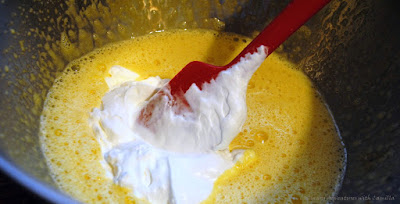 Place mixture into a plastic-lined bowl and freeze for at least 4 hours before serving. Six would have been better. Maybe next time my batch will be fully frozen.