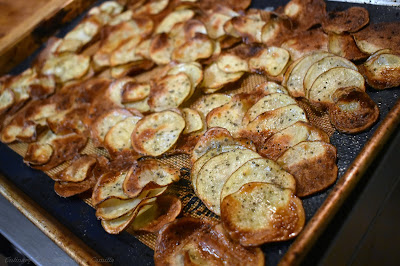 One of my favorite blogging friends - Wendy of A Day in the Life on the Farm - and I exchange book and movie recommendations fairly regularly. We seem to have similar tastes when it comes to those things. So, when she suggested that I watch Instant Family, I quickly added it to my watchlist.

Last night, Jake and I sat down to watch it. I didn't really know what to expect, but was quickly drawn in by its heartfelt and nuanced themes. This is movie about the Wagners - Pete (played by Mark Wahlberg) and Ellie (played by Rose Byrne) - who elect to foster three siblings, including one teenager. You follow them through the condensed timeline of parenthood - honeymoon stage, frustration, resignation, and more; I say 'condensed' because, with my kids, I got years of 'cute' before I had to deal with 'teen 'tude.' At one point, Pete and Ellie are arguing about whether or not to give the kids back...


Ellie: Whose idea was it to go and talk to the teenagers? We could've had a toddler who doesn't have opinions and thong underwear.
Pete: What?
Ellie: You pushed us into some next-level shit!

They decide to take on Lizzy and her two younger siblings, accident-prone Juan, and tantrum-prone Lita. The premise of the movie is a serious one and there are sobering doses of reality in there. While the Wagners are going through their certification classes, viewers are also educated in the reality of many children in the foster care system. It turns out that the story is based on the director Sean Anders' real-life experience in fostering and adopting three kids of his own.

The movie is candid about the long-term effects of previous physical and sexual abuse, the psychological strain of not being wanted and abandoned, and the reality of what happens to teens who age out of the system. "The thing is, over half the kids who age out of foster care end up homeless, addicted, incarcerated, or dead within two years," a previously foster child tells the group of potential foster parents.

The first time Juan calls Pete 'Dad' I saw Jake smile. And I chuckled as Ellie struggled to get the kids to call her 'Mommy'; I remember trying to get a 'Mamma' out of D and he stubbornly just kept saying 'Dadda.' Parenthood is definitely the toughest job I've ever had. And this movie was simultaneously serious, sad, but ultimately disarmingly charming. It was tear-jerking to see them become a real family. 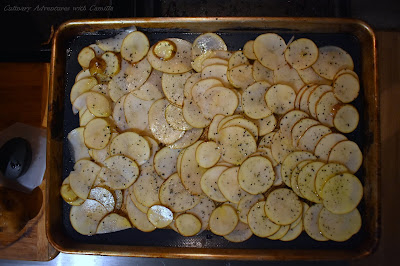 As usual, I was inspired into the kitchen after watching the movie. There was a scene when Pete and Ellie decide not to give in to Lita's diet of potato chips one evening. Or, at least that's their plan.


Lita: Where's my potato chips?
Pete: We're not having chips tonight, munchkin. Sorry.
Lita: I want my chips.
Ellie: Lizzy. Pete and I worked really hard on this dinner. There's lots of yummy food for you to eat.

Lita: No! ... No! I want my chips!
[insert Lizzy yelling at Lita in Spanish and Ellie yelling at Lizzy that she can handle it on her own]
Ellie: You're not having chips!
Pete: I don't think she's getting on board with the plan, honey.

Screaming, crying, nashing of the teeth, and eventually potato chips are flung everywhere. Once Lita gets her chips, the tantrum abates. I decided to whip up a sheet of baked chips. They are my snacking downfall. With a mandolin slicer, these are super simple and because they're baked, they are so terrible for you, right?!? Well, all things in moderation anyway.

Ingredients
Procedure
Preheat oven to 400 degrees F.  Line a baking sheet with parchment paper or a silicone mat. Use a mandolin slicer to slice potatoes thin. Place them in a large mixing bowl. Toss to coat with oil, then spread them in a single layer on the baking sheet.

Sprinkle with salt and pepper. Place in the oven and roast for 20 minutes.


After 20 minutes, the potatoes should be crisped, golden, and blistered. Serve immediately or let them cool.