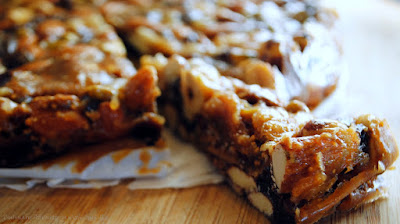 It's time for Fish Friday Foodies' December event. We are a group of seafood-loving bloggers, rallied by Wendy of A Day in the Life on the Farm, to share fish and seafood recipes on the third Friday of the month. And this month Karen of Karen's Kitchen Stories is at the helm, while the group serves up a virtual La Vigilia which is short for La Vigilia di Natale.

Karen provided a little guidance by sharing: "The Feast of the Seven Fishes is an Italian American Christmas Eve tradition. There are no hard rules." She gave us the outline of the courses according to Bon Appetit magazine and let us run with it.

Years ago, when I was in college, I dated a guy whose family was from Calabria. And the first Christmas I spent with them was when I learned about this tradition. His family, however, did twelve fish courses - not seven - in honor of the twelve apostles. Ironically, no one in that family really cooked; so twelve courses included fish sticks (from a box), tuna salad (from a can), etc. While I didn't love the execution of that dinner - and didn't stay with that college boyfriend - I did love the idea and I've adopted into my own culinary traditions.

So, when Karen said, 'seven' courses, I thought to myself: easy peasy! To be fair, I haven't actually done my vigilia yet as we serve it on Christmas Eve. But this menu is cobbled together from different meals I've prepared recently, and it is what I would serve for Karen's virtual seven-course feast.


In any case, this Christmas Eve celebration embraces the Catholic prohibition against eating meat while awaiting the birth of Jesus. So, the Feast of the Seven Fishes is a meal that consists almost entirely of seafood dishes. Here's what the #FishFridayFoodies are serving...


Oh, and here's my (completely unsolicited) advice for a fabulous Christmas: be present and spend some time under the mistletoe! 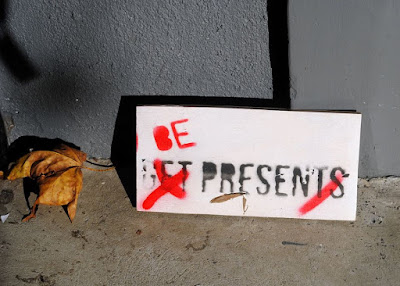 La Vigilia
The Feast of the Seven Fishes is a traditional Italian celebration that takes place on Christmas Eve. In Italy, it is also known as La Vigilia or the vigil that was held until baby Jesus was born. The feast is celebrated in Italy and by Italians all around the world. I already mentioned the significance of the twelve courses from my college boyfriend's family. So, I did some research as to why seven courses.
Apparently, it stands for the seven sacraments of the Catholic Church: Baptism, Penance, Holy Eucharist, Confirmation, Marriage, Holy Orders and the Sacrament of the Sick. It could also refer to the seven days of creation. Additionally, in Biblical numerology, seven is the number of perfection. 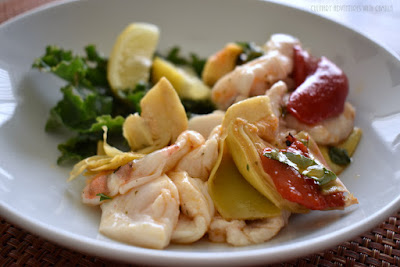 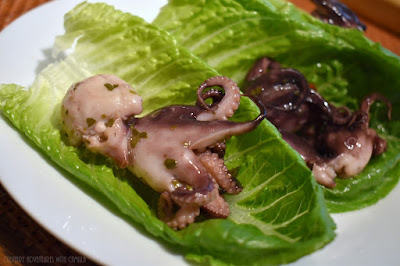 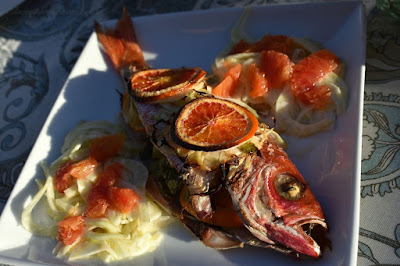 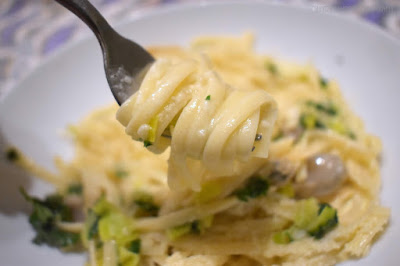 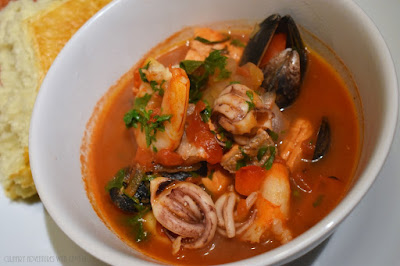 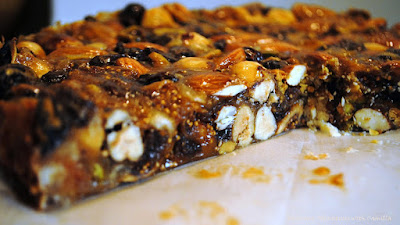 After our success with Panforte Nero, I decided to try a margherita version. This skips the cocoa powder and includes candied ginger, dried Buddha's Hand strips, and bee pollen. None of those are traditional ingredients, but it's my spin. Use whatever makes sense for you. 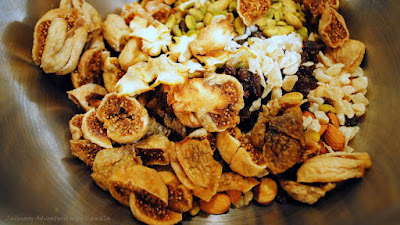 Procedure
Preheat oven to 300°F. Line springform pan with parchment paper - along the bottom and the sides. Butter the paper well.

Whisk together flour, spices, and bee pollen in a large bowl, then stir in nuts and fruit.

Bring sugar, honey, and ginger syrup to a boil in a 2-quart heavy saucepan over moderate heat, stirring until sugar is dissolved, then boil without stirring until thermometer registers 238 to 240°F, approximately 2 to 3 minutes.

Immediately pour honey over fruit mixture and stir until combined; the mixture will be very thick and sticky. Spoon mixture into springform pan, spreading evenly with back of spoon. Dampen your hands and press mixture firmly and evenly into pan to compact it as much as you can. 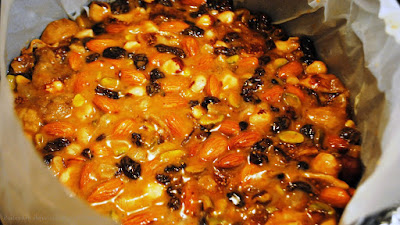 Bake until edges start to rise slightly and become dry, approximately 50 to 55 minutes. Cool panforte completely in pan, then remove the sides of pan. To serve, slice with a serrated knife into thin pieces.

And that's all for the 2019 #FishFridayFoodies series. What a year! We'll be back in January with Mediterranean seafood as a topic under Sue of Palatable Pastime. Stay tuned. And buon natale!