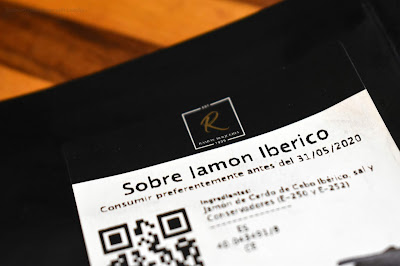 I had been enviously watching Tiff and Matt's travels to Morocco, Portugal, and Spain in recent weeks. While they were in Barcelona, Tiff posted the following photos; and I commented that it'd be nice if they could carry home a leg. I was joking. I mean, I had only met Matt once before, and I'm not quite that rude and demanding. I would typically make sure we've met half a dozen times before I start asking for food favors!

In any case, during the family white elephant gift exchange, when D's number came up, Tiff whispered 'Tell him to take the red one.' D-, grab the red bag. Thankfully, he did. Inside was a package of Jamón Ibérico, a bottle of Campo Viejo Reserva Rioja 2013, and a package of crackers. He wrinkled his nose at me and I hissed that I'd give him something in exchange.

Then, my Auntie Oly stole it from him. 'Tis the nature of the white elephant after all. Thankfully, I still had my number to go...and if I could steal it back, the gift would be 'dead'. Our family only allows two steals of a gift.

"Number 8," bellowed our family Santa, my Auntie Bec. Me, me, me! Auntie Oly, give me that Jamón! My aunt, grudgingly, handed it over and I might have done a little happy dance. Maybe. 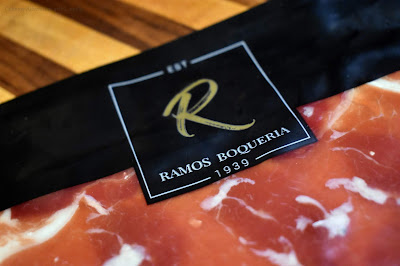 When we got  home later that evening, I pulled the jamón out of the bag and asked Jake if he wanted to try it. "Really?" he asked. "It's almost 11 o'clock at night." Tomorrow, then?  Ha. So, last night, I opened up the package of jamón. I served it with dried apricots, dates, olives, crackers and some cheese...oh, and the wine. And I called it dinner. 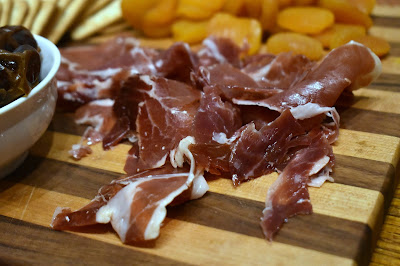 If you are unfamiliar, Jamón Ibérico, it's a type of cured ham from the black Iberian pig that lives in the central and southern region of the Iberian Peninsula. According to Spain's denominación de origen regulations, Jamón must be made from a pure bred or at least 50% cross-bred black Iberian.

I could see it in a video clip that Tiff sent, but the leg had the characteristic pata negra, black hoof. That refers to the color of the pig's hoof; most pigs have lighter hooves, but the black Iberian breed has a black hoof.

And what makes the flavor so unique is that their diets are limited to rooting naturally for olives, chestnuts, and acorns as their slaughter approaches.The hams are salted and dried for two week, then rinsed and left to dry to another four to six weeks. Curing takes another twelve months, though some producers cure for up to forty-eight months.

Honestly, I didn't read the package before I tore into it and made our dinner board. But the fat was silky and the meat delicious. I'm so glad that they carried this back from Spain and that I ended up with it. Woohoo. Gracias, Tiff and Matt. 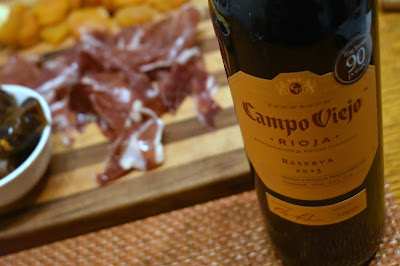 Along with the delicious Jamón, my white elephant loot included a bottle of  Campo Viejo Reserva Rioja 2013. Back in July of this year, one of my wine groups explored and posted about Rioja wines. You can read my post: Robatayaki and Rioja Wines, the Perfect Summertime Party. During my research for that event, I learned that the 'reserva' designation means that the wine was aged for thirty-six months with at least twelve of those in oak barrels. 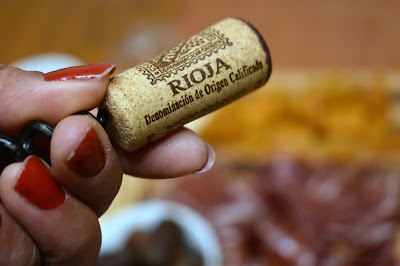 Campo Viejo has long been at the forefront of Rioja winemaking. And I read a mention that the estate has ties to winemaking all the way back to the Roman Empire, but I haven't been able to confirm that. 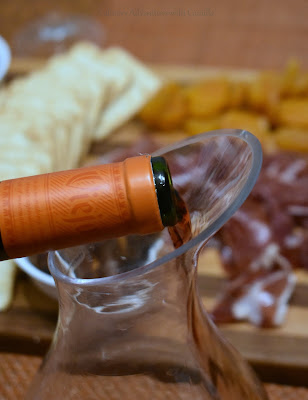 To the eye, this wine is a pale, clear garnet with flecks of gold at the edges. It has a great, complex nose that, to me, grew more floral as it sat. Jake thought it leaned more spicy than floral. 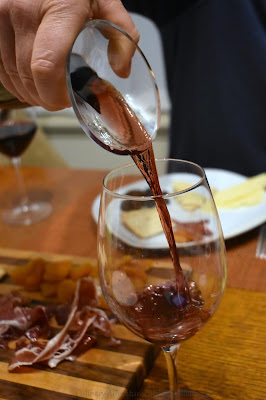 The first word that popped into my head as we drank and paired: savory. The second word was 'sparse.' The wine was thin and focused with firm tannins like green tea with bright acidity. This wine was a nice match for the jamón.