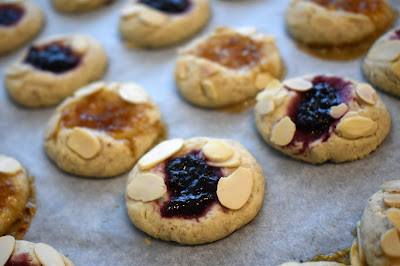 This weekend we had our extended family Christmas celebration. And I was thrilled to spend some time with my cousin's boyfriend, getting to know him and, especially, hearing about their recent travels to Morocco, Portugal, and Spain. I was quite envious of their globe-hopping and was happy to live vicariously through their tales. 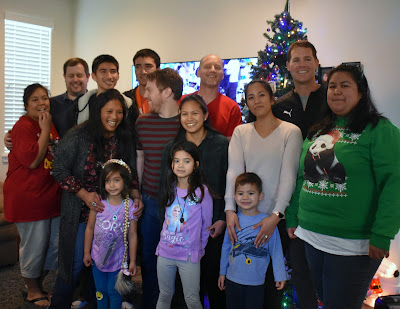 It was the first time that the larger family was meeting him - though he and Tiff had stopped by one of the boys' robotics competition earlier this Fall - and I have to say that he hung with the 'crazy' pretty darn well. My family can be loud and obnoxious. As D commented, "I don't envy any of the guys who marry into our family. But I'm glad that Daddy did." Me, too!

While Tiff and Matt were in Morocco, they took a cooking class. And Tiff, who is a baker extraordinaire, brought some Moroccan cookies to the party. Actually, since they both took the cooking class, I'm not sure who baked them. Maybe both. In any case, the cookies disappeared quickly, but they were Moroccan thumbprints of sorts and had some rosewater in them. So, I decided to try my hand at making a version.

When I asked Tiff what these were called, she said that she didn't know. "I don't think there's a name. The recipe the food guy sent just says 'cookie recipe.'" I'll keep researching; in the meantime, 'cookie recipe' it is!

Tiff's version used strawberry jam, I believe. I used a Forbidden Fruit Marmalade from Friend in Cheeses and some homemade olallieberry jam. I also used two-thirds of the dough to make thumbprints and, then, one-third to make larger freeform mini galettes. 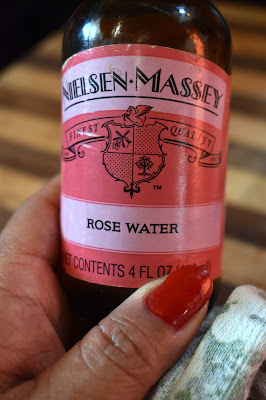 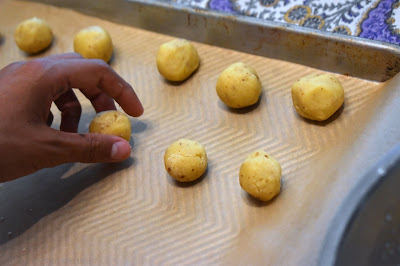 Preheat oven to 325°F. In a large mixing bowl, cream together the butter and sugar until light and fluffy. Blend in the eggs until incorporated. Stir in the flour and ground almonds until a flaky dough is formed. Add in the pure vanilla extract and rosewater, gently working the dough until it forms a ball. 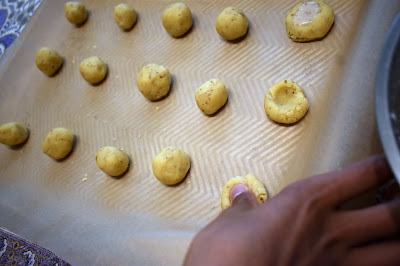 Pinch off pieces of dough and form into small balls, about the size of a walnut in its shell. Place each ball onto the baking stone or parchment-lined baking sheet, dab your thumb into the rosewater extract and press a "thumbprint" into the center of each cookie, slightly flattening. The cookies will not spread, so make them the size that you want!

Spoon about 1/2 t jam into each thumbprint. Gently press sliced almonds into the sides of the dough. I sprinkled a few almonds over the top of the galettes as well. 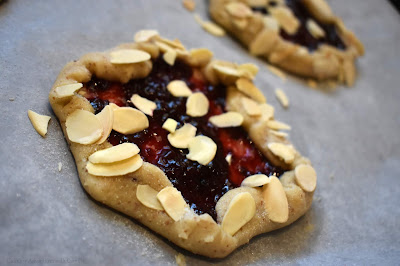 Bake until golden brown, about 20 to 25 minutes. Let cookies cool for several minutes on the sheet before transferring to a wire cooling rack to cool completely.

I'm uncertain how close this is to the recipe that Tiff and Matt were taught in Morocco, but they disappeared quickly and I enjoyed them. So I'll definitely be making them again soon. Maybe as soon as tomorrow since I need to deliver four dozen cookies for a school event on Wednesday.