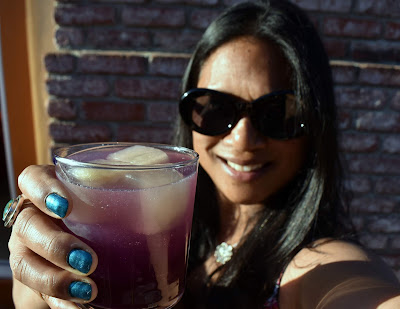 This month for our Lit Happens book club, Amy of Amy's Cooking Adventures picked The Girl Who Drank the Moon by Kelly Barnhill.* Though that is not a cook-from-the-book kinda group; I always find some kind of inspiration to create an edible of some kind! But first, the book... 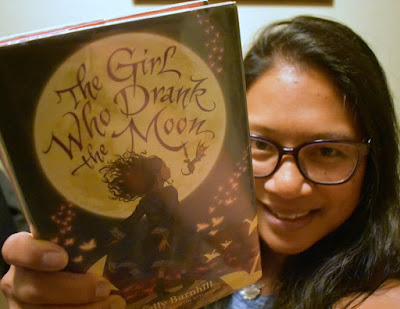 I put in the request at the library at the end of last month. But something happened and I didn't get the email that I could pick it up until the middle of this month...just before we were heading out of town for a robotics competition. I picked up the book while brownies were baking for the team. But I didn't have a moment to myself to read during the trip. Not. One. Single. Minute. As soon as I was off duty as a chaperone, I was sleeping. Really.

It was an exhausting, but exhilarating trip. No matter. Once I returned home, this was a quick and delightful read.

I'll admit that I am almost always wary of books that have won awards. And this one won a Newbery - honoring 'distinguished contribution to American literature for children' - in 2017. But I dove right in and I was hooked. This has everything that other modern fairytales sometimes miss. This is nuanced and charming. It's reflective, lyrically written, and ends just when it should. Best yet: I do not think that adults feel as if they are slogging through a children's book and children wouldn't be frightened by the thread of a dark mystery. What a gem!

The Girl Who Drank the Moon might be one that I pick up every Halloween from now on. It's fantastical as well as fantastic. It's a good versus evil story filled with witches, dragons, monsters, and fairies. Luna, a young girl with a crescent moon-shaped birthmark on her face, became enmagicked as a baby when she drank the moon. She lives in an enchanted forest with Xan, a good witch who rescued her after she was abandoned as a sacrifice in the woods, and Glerk, a kind and gentle bog monster. Her constant companion is a tiny dragon named Fyrian who thinks he's bigger than he is. Do you remember Mulan’s quirky, funny dragon companion? That’s Fyrian.

This is a rich, magical story with unforgettable characters. I look forward to reading it again next Halloween season.

My favorite passage: "There was a memory here. A beloved person. A loss. A flood of hope. A pit of despair. How many feelings can one heart hold? She looked at her grandmother. At her mother. At the man protecting his family. Infinite, Luna thought. The way the universe is infinite. It is light and dark and endless motion; it is space and time, and space within space, and time within time. And she knew: there is no limit to what the heart can carry" (pg. 364). 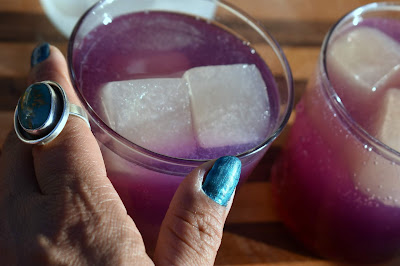 Because of the book title, I started searching for drink recipes that had the word 'moon' in them. I came across an entire set of drinks called 'moon milk', a warmed milk drink inspired by a centuries' old Ayruvedic belief that warm milk helps induce restful, deep sleep. There were recipes for moon milk that included spices, herbs, and more. I was particularly intrigued by a blue matcha moon milk.

If you've been following my blog for awhile, you'll know that I love matcha. I've made Matcha Krispies, Matcha Beignets, and even Matcha Panna Cotta. So, I was dying to know what blue matcha was. 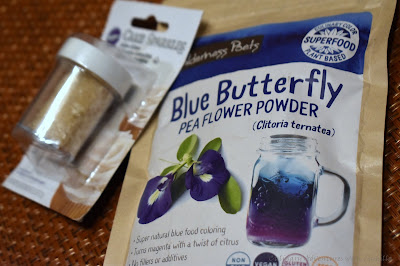 Turns out, blue matcha is not actually matcha in the sense that it's not a powdered tea. Blue matcha is a powder made from pulverizing the butterfly-pea flower; it has nothing to do with the tea leaf bush! But it is a stunningly beautiful color. I have used the whole flowers to make color-changing lemonade before. So, I ordered some blue matcha* and was determined to make myself a cocktail with it. First, I did try the blue matcha moon milk... 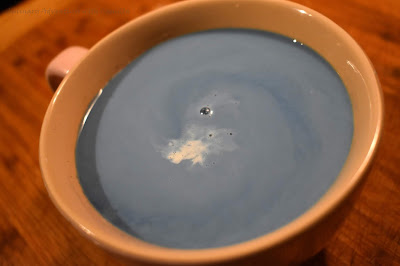 As gin is usually my booze of choice - and because I wanted to make sure that the cocktail had citrus in it to activate the magical color-shifting properties of the blue matcha - I leaned towards a riff on the gimlet. A gimlet is a cocktail that is typically comprised of two parts gin and one part lime juice. In the 1953 novel The Long Goodbye by Raymond Chandler, he writes that a real gimlet is half gin, half lime juice, and nothing else. Then I had to throw in some tonic because, well, gin and tonic. So, this is neither a genuine gimlet nor a gin and tonic. But it was tasty and it fit the theme I wanted: magical blue matcha.

Regarding Luna's magic..."Each day the magic became more unruly. Luna bumped tables with her elbows and accidentally transformed them to water. She transformed her bedclothes to swans while she slept (they made an awful mess). She made stones pop like bubbles. Her skin became so hot it gave Xan blisters, or so cold that she made a frostbitten imprint of her body on Glerk's chest when she gave him a hug. And once she made one of Fyrian's wings disappear in mid-flight, causing him to fall. Luna skipped away, utterly unaware of what she had done" (pg. 64).

"It was starting early. Her magic. All that power - the great surging ocean of it - was leaking out. He had no way of knowing whether the child meant to do it, or even noticed it happening at all. He remembered when Xan was young, how she would make ripe fruit explode in a shower of stars just by standing too closely. She was dangerous then - to herself and to others. As Luna was when she was young. As she likely was now" (pg. 235). 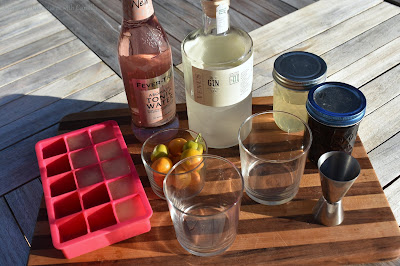 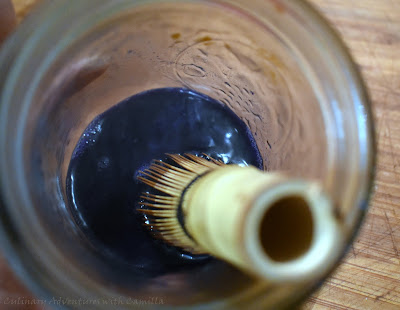 Blue Matcha Simple Syrup
Place water and sugar in a small sauce pan. Place blue matcha powder in a mason jar and add 2 T water. Whisk until smooth. Bring the water and sugar to a simmer. Swirl the pan until the sugar is completely dissolved. Whisk in the blue matcha. Once cooled, jar until ready to use.

Lime Simple Syrup
Place water and sugar in a small sauce pan. Bring the water and sugar to a simmer. Swirl the pan until the sugar is completely dissolved. Whisk in the lime juice. Once cooled, jar until ready to use. 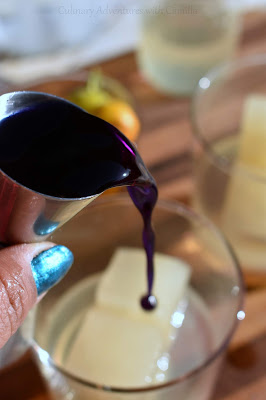 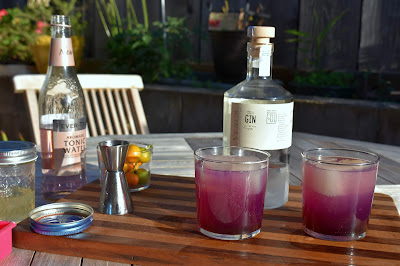 Garnish with edible glitter, if using. 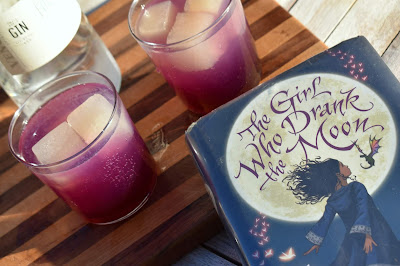 And I am adding this to my #FoodieReads list for the month.
Click to see what everyone else read in October 2019: here.