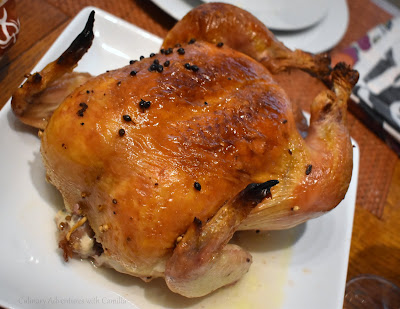 I still don't know why I don't brine meats more often. I guess I've just recently become a brining convert. I brined chicken thighs in a hot cider tea brine for #AppleWeek last month; and I brined quail for an Uruguay wine event earlier in the year. But, before that, I never really thought about brining. However, the resulting tender, juicy roasts are making it a must in my book.

So, when I knew that I would be feeding four hungry teenage boys on a Friday night, I decided to brine and roast two whole chickens for dinner. For the grown-ups I was also going to pair with a Merlot ahead of this month's #MerlotMe celebration. So, I read the tasting notes included in the packages from the wineries and selected on that had sassafras and licorice aromas. Supposedly. 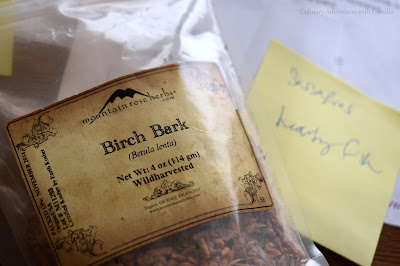 So, I decided to include some birch bark in my brine. Sassafras and birch bark smell strongly of root beer; I guess I could have added some of that to the mixture, too! Next time. 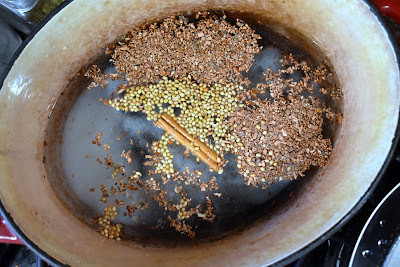 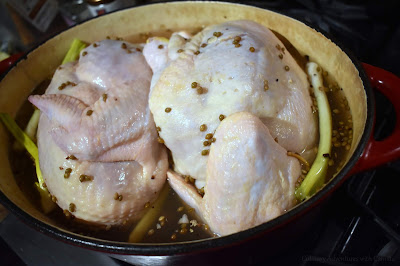 In a large stock pot, bring 6 C water to a boil. Remove from heat and stir in the salt until it dissolves. Add another 6 C of water and let cool. Stir in the honey, molasses, tamari, and all the spices. Whisk together to blend, then submerge the chicken into the brine. If it's not fully submerged, be sure to turn the chicken halfway through brining. I let mine brine for about 12 hours. An hour before cooking, remove the chicken and rinse in cold water. Discard the brine. 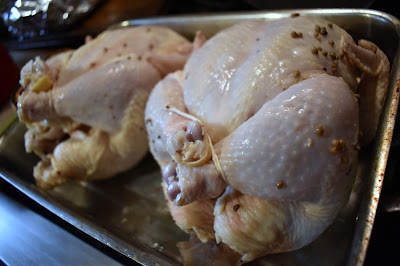 Preheat the oven to 400 degrees F. Dry the bird, inside and out, and stuff each bird with the two lemons and onion. Truss the legs.

Place the chicken, breast side up, in the center of a baking dish. Brush the meat with melted butter and cover with foil. Roast for 60 minutes. Raise the temperature to 450 degrees F. Uncover and roast until the skin is golden brown and crisped. You want the internal temperature of the thickest part of the bird to be about 165 degrees. I put the chicken back in the oven after this photo! 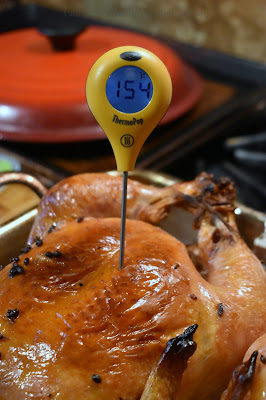 Once you've reached the proper temperature, remove the chicken from the pan and flip it breast-side down so that the juices flow into the meat. Let it rest like that for 15 minutes before carving. 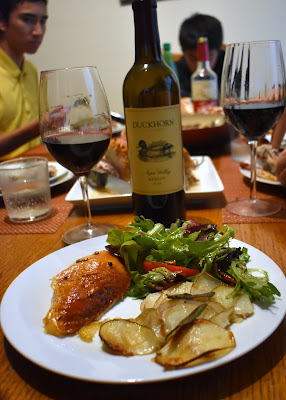 I served this brined chicken with potatoes and a green salad. And, for the adults, I poured the 2016 Duckhorn Merlot. Tasting notes to come on that!