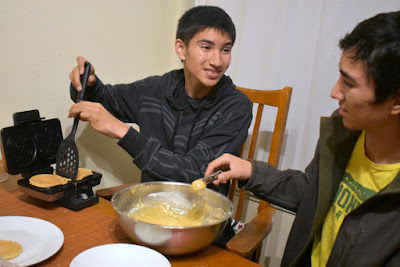 I bought The Love Goddess' Cooking School by Melissa Senate* probably half a decade ago. And I probably even read it when I bought it. Parts of it seems oddly familiar. But yesterday, on the last day of the boys' Fall break, I crawled into bed and read it from cover to cover. They were at robotics for part of the day, so my house was quiet and peaceful. 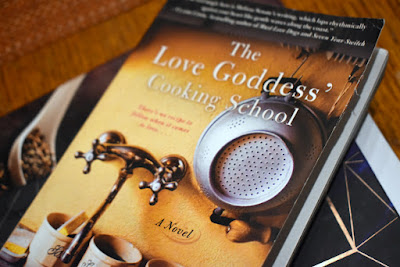 This is chick lit, no doubt about that. But it's chick lit that's not trashy...and it involves food.

Holly Maguire has recently had her heart stomped on by a long-time boyfriend in California. She returns to Blue Crab Island, off the coast of Maine, to spend time with her grandmother Camilla, a fortune-teller from Italy and owner of Camilla's Cucinotta, a local cooking school. When Holly was 16-years-old, her nonna Camilla told her that her great love would like sa cordula, an old-world delicacy made with lamb intestines and peas in a butter sauce. Needless to say, not a single one of her boyfriends has ever liked that dish.

When Camilla dies, Holly inherits the house and the cooking school. She is determined to make it work and embraces her grandmother's legacy.

Her students want to learn more than just Italian recipes. Simon, a newly single father, want to learn how to make his daughter's favorite Italian dinners. Mia, a tween, wants to learn to make lasagna so that her dad will break-up with his barbie doll-esque lasagna-making girlfriend. Juliet, Holly's childhood friend from the island, has retreated from a personal tragedy. And Tamara is a serial dater who is finding solace in the company and recipes she's learning.

As the class convenes each week, they add Camilla's essential ingredients of wishes and memories into every dish. "All of Camilla Constantina's recipes called for wishes and memories, either sad or happy or unqualified. They were as essential to Camilla as were the minced garlic or the tablespoon of olive oil. Her grandmother had told Holly that when she first started cooking as a young girl at her mother's hop, she began the tradition of adding the wishes and memories, which had delighted her elders" (pg. 12).

Friendships are formed, confidences solidified, love found, love lost, and love re-found. The book made me wonder: Do you only have one great love of your life? I don't think so. I think we are better equipped for love at certain times in our lives. Then, we just need to keep that connection going with intention and passion!

But through the book, Holly finds strength in herself. She finds peace with her mother. She finds love. And she finds her purpose in life. Does it sound formulaic? It was. But it was an enjoyable read with lots of food mentions. 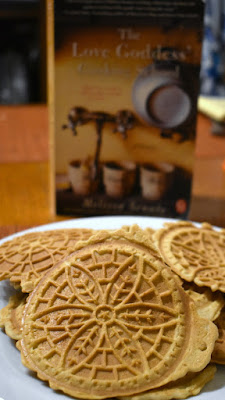 There were so many things I thought to cook from the book though sa cordula was not on the list! Just the menu she plans to try out for a wedding catering gig had my mouth watering. "She lay her notes, covered in scribbles and Post-its, on the counter. White bean pâté on crostini, and cheese; antipasto platter, Tuscan roast beef tenderloin roasted with pancetta, herbs, and red wine; risotta alla Milanese; gnocchi filled with herbs and mushrooms and served with asparagus; cotoletta Milanese, her grandmother's favorite dish, with roasted pine-nut and fontina cheese sauce" (pg. 123).

There were also recipes in the back of the book for Camilla's Chicken alla Milanese, Risotto alla Milanese, Holly's Heartbreak Pasta Salad, and Camilla's Cucinotta Tiramisu. But I've made plenty of risotto dishes such as Roasted Lobster Risotto, my recent Sweet Potato Risotto, or Risotto all'Amarone. And Tiramisù is often our celebratory dessert of choice: Tiramisù for My Love, for example.

So, over dinner I was talking about this book and the Kitchen Elves said that I was making them think of pizzelle. They offered to make a batch if I made hot chocolate. Done! As for the 'from Camilla's Cucinotta' part, that refers to my kitchen, not Holly's nonna Camilla. 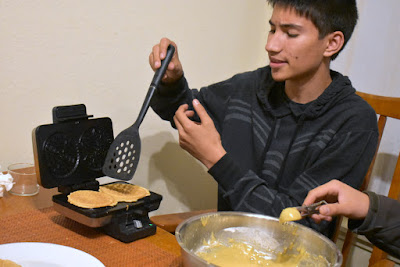 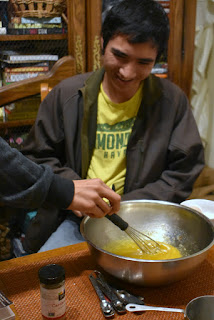 In a large mixing bowl, beat the eggs, sugar, coffee and almond extracts until well combined. In a medium mixing bowl, stir together the flour  and baking powder.

Add the melted butter to the egg mixture. Then, with a wooden spoon, fold in the flour mixture and the lemon zest. The batter will be thick. 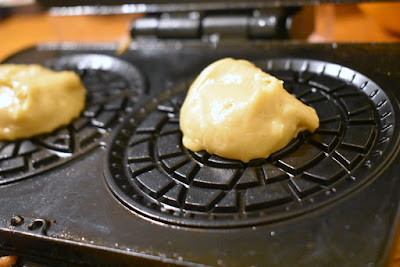 Heat your pizzelle iron. Lightly grease with oil. Cook the pizzelle according to the instructions that came with your iron. D's suggested 1 to 2 t of batter per pizzelle. 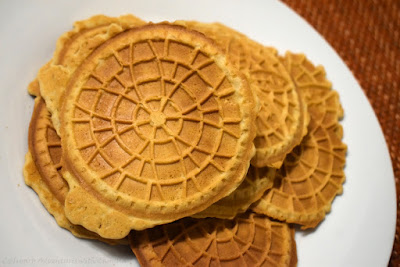 Repeat till all the batter is gone. You can use a pair of kitchen shears to trim any ragged edges. Or leave them rustic.