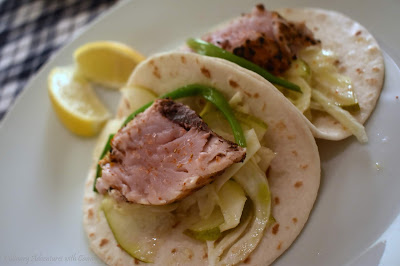 With delicious serendipity, I found freshly caught albacore tuna loins at the market this week. Albacore is a smaller member of the tuna family that has been shown to have low or undetectable mercury levels. They are mostly caught offshore, and unlike most local fishing boats, albacore boats may be at sea for days on end. In those cases, they are flash-frozen to preserve their freshness. Albacore tuna is highly versatile, and when you get sushi-grade tuna, it's perfectly fine to eat it raw.

I decided to crust it with some spices, sear it, and serve them up as soft tacos with an Italian wine from Lugana. 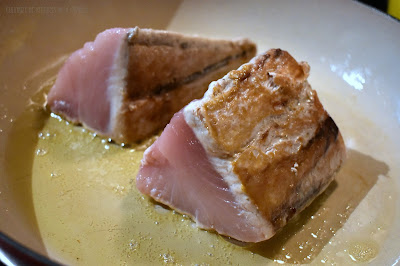 Seared Albacore
Mix the spices together in small bowl. Pat the albacore dry and rub the sides with the spices.

Preheat a skillet. Pour in the olive oil and swirl to coat the bottom of the pan. Wait till the oil begin to bubble. Sear the tuna on all sides until the surface is nicely browned. Remove the tuna to a cutting board. Let stand for a few minutes before slicing into 1/2" coins.

Fresh Slaw
In a medium mixing bowl, mix the ingredients together. Let stand for a few minutes before serving. 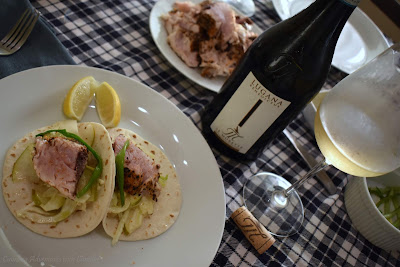