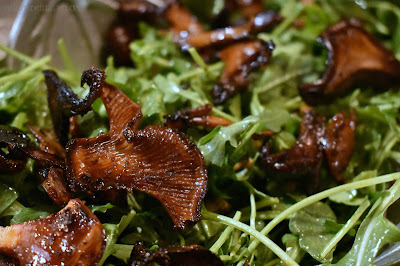 Welcome to the May edition of the Fantastical Food Fight. I love this event coordinated by Sarah of Fantastical Sharing of Recipes. For more information about it, click here.

This month, we were given the challenge of making a salad recipe. I have no dearth of salad ideas from more exotic - Fermented Tea Leaf Salad - to more typical - Radish, Rhubarb, and Strawberry Salad. My younger son is the master kale-massager! 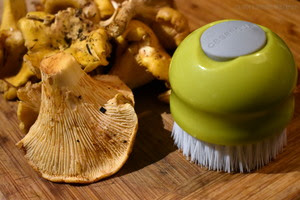 Though a warm salad might seem strange, we are still having some cold mornings and evenings. And, besides, when I see chanterelles in the market, I do not pass them up! 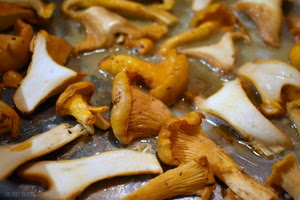 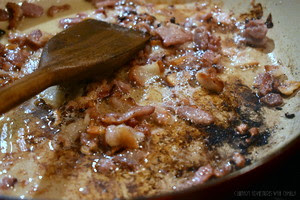 Warm Mushrooms
Melt butter in a large, flat-bottom pan. When the butter begins to brown, lay your mushrooms in the pan. Let the mushrooms brown and crisp. Flip the mushrooms and crisp them on the other side. Only after they are crisp should you season them. Adding salt when they are cooking will lead to soggy mushrooms. Season to taste with salt and pepper. Set aside while you make the vinaigrette.

Bacon Vinaigrette
In a large skillet, cook bacon over low heat until the fat is rendered and the bacon browned. Remove bacon from the pan to a plate with a paper towel. Strain bacon fat and return half to the skillet. Add in the leeks and cook until softened and beginning to caramelize, approximately 10 to 12 minutes. Whisk in the vinegar and simmer until reduced to about 3 T, approximately 5 minutes. Remove from the heat and whisk in honey, lemon juice, and remaining bacon fat. 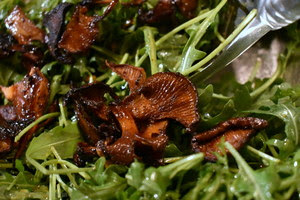 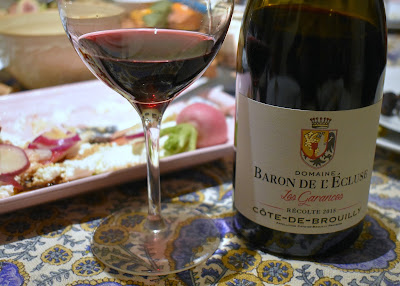 And, as a bonus, I'm sharing a wine pairing: Accompany this salad with a light-bodied red wine. I poured one from Côte de Brouilly from Domaine Baron de l'Ecluse. Its fruity aromas paired perfectly with the bacon's saltiness and the earthy mushrooms.