From Sardegna to the Land Down Under: Vermentino + Pizza alle Vongole #ItalianFWT 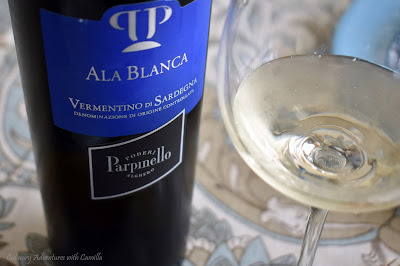 This month Susannah of Avvinare asked the Italian Food Wine Travel bloggers to come together to focus on the Vermentino grape. You can read her invitation: here.

Sardegna
I have several fond memories of Sardegna (Sardinia) from when I spent my birthday weekend there over two decades ago. I was living and working in Rome and was determined to spend my 24th birthday doing something memorable. I asked all of the other au pairs to come with me and only Kristin took me up on it. We were lacking in money, but made up for it with our sense of adventure.

We took the train from Termini to Civitavecchia; we hopped on an overnight ferry, slept on the benches on the deck, and landed in Olbia in the morning. I will never forget the scent of orange blossoms that hung heavy in the air as we chatted with the bus drivers and tried to figure out where to go next. One man suggested Santa Teresa di Gallura. He said we'd like Spiaggia Rena Bianca. And that's how we ended up camping on the cliffs above one of the most beautiful beaches I've ever seen. Since then, Sardegna has held a special place in my heart.

From our perch, we could see Corsica to the north, a faint, violet-hued landmass just across the cerulean waters of the bay. We hiked around the imposing Torre di Longonsardo which dates back to the 1500s. We swam in the warm water the color of vibrant turquoise. 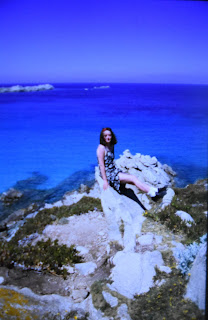 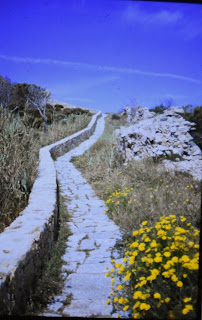 Forgive the image quality; I'm shooting a photo of a slide backlit against my computer screen. One of these days, I'll get my act together to scan these into digital format!

And, for my 24th birthday dinner, we walked into town, picked up fresh strawberries, some sheep's milk cheese, crusty bread, and a bottle of red wine. Back then, I wasn't very knowledgeable about wine. I liken it to the scene in Only You when the two girls are settling in to a table in Trastevere for dinner.

I wasn't quite that bad, but I certainly didn't pay attention to the grapes used and I wasn't particularly open-minded about white wines. I was a red wine drinker and that was it.

Fast forward twenty years or so and I was excited to have an excuse to uncork some white wine from that beautiful island. I actually tracked down two bottles of Vermentino from Sardinia, one from Australia, and one from Lodi, California. 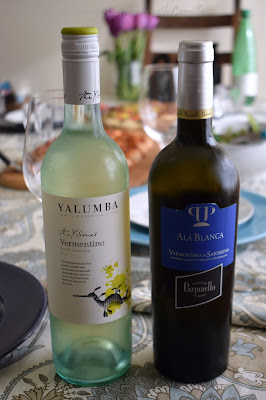 Vermentino is a light-skinned wine grape that is primarily found in Italian wine. Widely planted in Sardinia as Vermentino, it appears in Liguria under the name Pigato and in Piedmont under the name Favorita. It is also being cultivated in increasing amounts in the Languedoc-Roussillon area of France.

For this dinner, I opened up the Poderi Parpinello Ala Blanca 2016 from Sardinia and the Yalumba Y Series Vermentino 2014 from Australia. I decided to save the one from Lodi to compare with the second bottle from Sardinia that I have. Stay tuned for more on that. 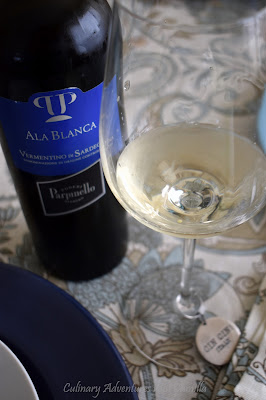 Poderi Parpinello Ala Blanca. This is a pale straw color with aromas of citrus. On the tongue, however, you get more complex flavors from fruit to almonds. 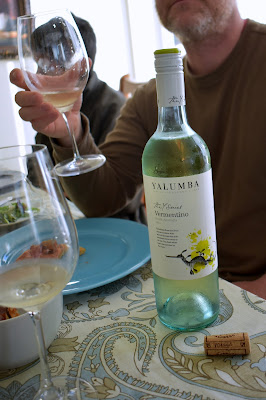 Yalumba Y Series Vermentino 2014. The only thing I am going to say is that there's clearly a difference in palate here. I - no joke! - stuck my nose in the glass and didn't even want to try it. The word that came to mind was 'skunky.' I did end up taking two tiny sips on my husband's urging. And I really would have thought that there was something wrong with the wine except for the fact that Jake actually preferred it to the other. Go figure. 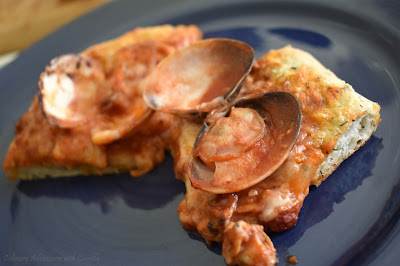 Yes, that does mean 'Clam Pizza.' When I was trying to decide on my dish, I wanted one that would pair well with the Vermentino and be somewhat meaningful in terms of where the wine was made. Seafood is a natural pairing for any island plus I found a photo of seafood pizza in Australia. Now, I don't know how common or traditional that really is, but it inspired me. 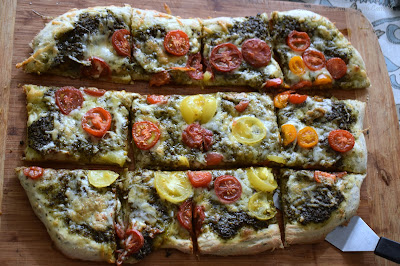 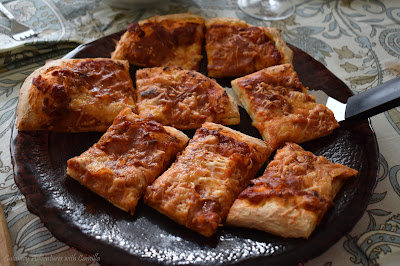 And for the less adventurous, I did offer more traditional pizzas - pesto with tomatoes and red sauce with meat. But I was pleasantly surprised that most of the clam pizza was gone at the end of dinner. 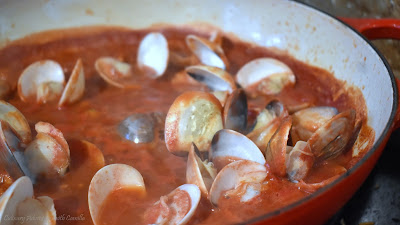 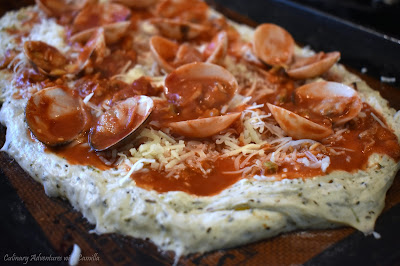 Basic Dough
Mix all of the dough ingredients together in a large bowl. The texture will be a wet, sticky dough. Cover and let ferment for as long as you can - between six and twelve hours. At the end of that, use the dough as you would use any pizza dough.

Clam Sauce and Topping
Place tomato sauce, white wine, and minced clams with liquid in a skillet. Bring to a simmer and cook until the sauce is sufficiently thickened. Fold in the herbs and season to taste with salt and pepper. Nestle the littleneck clams in the sauce. Cover and steam until all of the clams open, approximately 6 to 8 minutes. Remove the clams - in the shells - from the sauce and set aside


Preheat oven to 425 degrees F. Press or roll your dough out on a baking stone or a parchment paper or silicone mat-lined sheet. Spread clam sauce over the dough, reserving about 1/2 C. Sprinkle with 1-1/2 C cheese.  Nestle clams, in the shell, into the cheese layer. Spoon the remaining sauce over the clams and top with the rest of the cheese.

Bake in preheated oven for 15 to 20 minutes, or until golden brown. Serve hot. 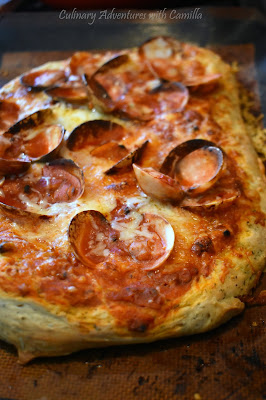 Next month, we explore Soave with Li Valentine of The Wining Hour. Can't wait for that. Stay tuned. As you can see my pizza alle vongole was a hit...that Vermentino from Australia, not so much! 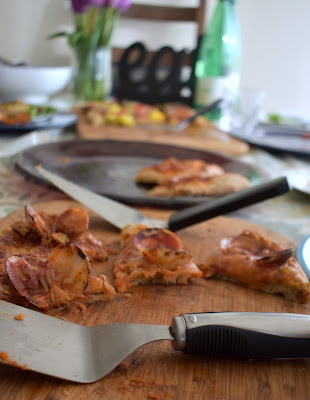