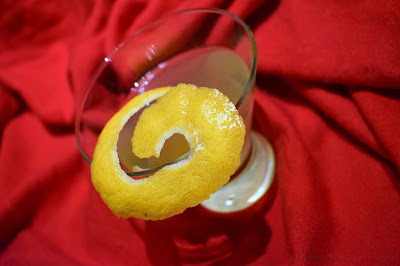 Welcome to the May edition of Food'N'Flix. This month, Kimberly of Coffee and Casseroles is hosting; she invited us to watch Bram Stoker's Dracula*. You can read her invitation: here.

Let me start with this: I have never seen this movie. I had an idea of the story, but even when it came out in the early 90s, the mishmash of big name actors and, of course, well-respected director Francis Ford Coppola's name wasn't enough to get me to the theatre.

When Jake opened the mail and saw the DVD, he knew instantly it was "for a food project." Ha. Yes, it is. And he followed up that keen observation with a comment that he wasn't really interested in watching it with me. Fine.

So, when I came home early from the National History Day competition last weekend - to prep for my cooking class on Sunday morning - I popped in the DVD. But it was late at night, dark outside, and I didn't need anything creepy keeping me awake; I already hate being alone in my house. I quickly pressed pause, waited until after my class, came home, and watched it at lunchtime with all the curtains open!

Let's sum up: The movie begins with the tragic story of Vlad the Impaler who becomes Dracula (played by Gary Oldman). While he is off fighting the Crusades for the church, his wife (played by Winona Ryder) hurls herself from a castle parapet when she believes he has been killed. When he returns, the Church refuses to give her a church burial because she took her own life. He runs his sword through the cross, welcomes Satan into his heart, curses God, and swears to live until he can find her again...or some such craziness.

Fast forward to Victorian England. We meet a young attorney (played by Keanu Reeves) - engaged to be married to Mina (also played by Winona Ryder - you see where this is going, right?!) - who is dispatched to Transylvania to assist Dracula in some business transactions. Dracula sees a photo of Mina and knows that his wife lives again.

This movie is an exercise in feverish excess. It's operatic, Gothic, and highly sexualized. If I think of it as an art house film, maybe I can see its appeal. I still wouldn't need to watch it more than once. But I was inspired into the kitchen. One scene in particular involves Dracula seducing Mina with absinthe. 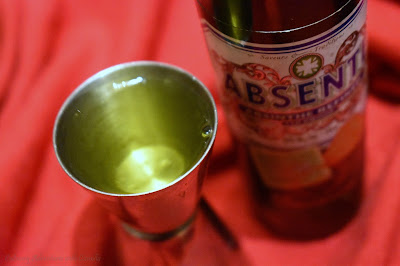 Years ago I had planned a La Fée Verte party, envisioning an absinthe tasting with lots of tasty French nibbles, but it was hijacked by my husband's UFO theme and I ended up serving Out of this World Amuse Bouche instead, including Pork Tenderloin with Pistachio Mousse, Linguica Torta, Fennel-Pollen Topped Chocolate Mousse. I shelved my absinthe tasting idea.

In fact, I had never tasted absinthe until 2012 when I was assigned an article on the now defunct Restaurant 1833 for Edible Monterey Bay: Adventuring Back to 1833. I went to the restaurant with two friends; we decided that we had to order their Russian-style absinthe tableside preparation. Think fire, absinthe, orange juice, and a straw. It felt very illicit.  Since then, I have always kept some absinthe in my cabinets...just in case. 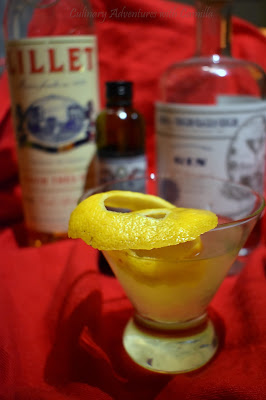 I did some research on cocktails with absinthe and stumbled across the Corpse Reviver No. 2. Corpse Revivers are a family of cocktails with seemingly endless varieties. Versions one, two, three...all the way to eight. Really?! From what I gathered, version one included cognac, Calvados or equivalent apple brandy, and sweet vermouth. Version two is the one I found with absinthe. Version eight uses bourbon. You get the idea. But it fit the bill: first, it used absinthe and, second, it has an appropriate name. Seemed fitting to whip up a Corpse Reviver in honor of a movie about characters who live forever...or until you stab them through the heart with a stake and chop off their head! This is a slightly adapted cocktail as I didn't have any Cointreau or any other orange liqueur. But, given the number of variations on this drink, I didn't feel badly about leaving it out.

Oh, and I didn't see the point of doing an absinthe rinse. What is the point of swirling it around my glass and pouring it out? I just added it to my drink!


Procedure
Add absinthe to a clean glass. Swirl it around to get it to coat the inside of the glass. Set aside.

In a cocktail shaker filled with ice combine gin, Lillet Blanc, and freshly squeezed lemon juice. Cover and shake to combine. Strain into absinthe glass and garnish with a lemon peel. Cheers!

Stakes Through the Sanguinaccio 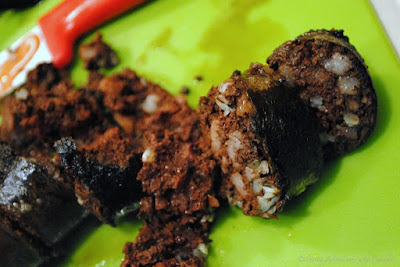 I was also spurred to use blood sausages for an appetizer. Sanguinaccio is an Italian blood sausage. When I'm lucky enough to find it, I usually grab several and keep them in my freezer until inspiration strikes. Dracula certainly had me envisioning blood sausages in a lot of different ways. But I kept it simple. 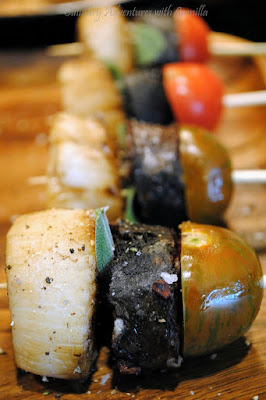 Procedure
After you have cooked the sausages, cut them into coins of the same thickness as the scallops. Give the scallops a quick sear and set aside. Skewer the scallops, top with a sage left, followed by the sanguinaccio, and finished with a tomato. Sprinkle with salt and pepper. Drizzle with olive oil. Serve immediately.

So, those are my offerings for this month's Food'N'Flix: Stakes Through the Sanguinaccio and a Corpse Reviver Variation. If you haven't seen Bram Stoker's Dracula, maybe give it a try. It wasn't really my kind of flick, but I'm glad I watched it once. If you are a food blogger and want to join the fun, please do. The month is still young.

Or jump in for the June movie with The Incredibles hosted by Simply Inspired Meals! Stay tuned for more information about that pick.