By Camilla M. Mann May 27, 2018
This sponsored post is written by me in conjunction with the The Book Club Cookbook
for the virtual supper party feature for The Lost Family. All opinions are my own. 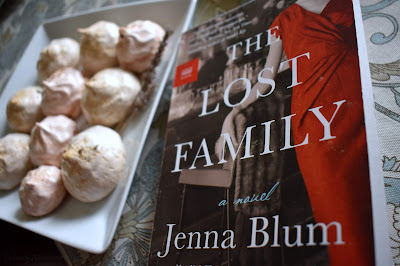 The Lost Family Supper Club
A bunch of food bloggers are gathering - virtually, anyway - to share thoughts and inspired recipes ahead of Jenna Blum's June 3rd release of her new novel, The Lost Family. I was tickled to have been invited and love seeing familiar blogging friends - Wendy, Amy, and Sarah just to name a few - joining in. Also very happy to meet some new bloggers as well, including Beth, Emily, and Pam. And, I was so, so thrilled to be introduced to a new-to-me author that I already have a few more of her books on order. I can't wait to read more of her work!

Click here for more information about the virtual supper club. 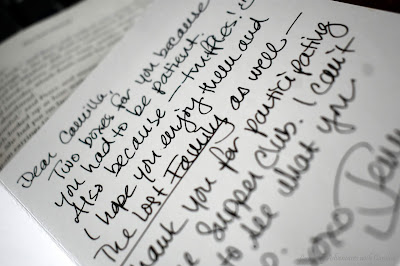 One of the things I love about these virtual parties is, obviously, getting to read the book early and share my thoughts and - even better - connecting with the author herself. Jenna shared that all the menus in The Lost Family "are a fusion of 1965-era favorites and German-Jewish comfort food, Peter and Masha’s favorite childhood dishes:  Masha’s “Little Clouds” (cream puffs with chocolate fondue),  Brisket Wellington, Chicken Kiev, and my favorite, Masha Torte—an inside-out German chocolate cake with cherries flambé."

Jenna admits, "I LOVE FOOD, and I had a joyous time creating and kitchen-testing all the recipes for Masha’s menus in The Lost Family (there are two, Spring 1966 and Fall 1965). I relied on my German friend Christiane’s mother’s recipes, my childhood memories of my Jewish grandmother’s dishes, the Mad Men Cookbook and similar cookbooks from the 1960s, and ingredients from my garden. ...but I’m not a chef, so there were some notable cataclysms, for instance throwing ice cubes into the oven to create crispy baguettes for Peter’s crostini (explosions) and dropping an entire Masha Torte on the floor (flaming explosion; we ate it anyway, and it was good!)." That would have been quite a sight to see! I'm not sure I would have been brave enough to eat the torte off the floor...though I'm certain she's a much better housekeeper than I am! 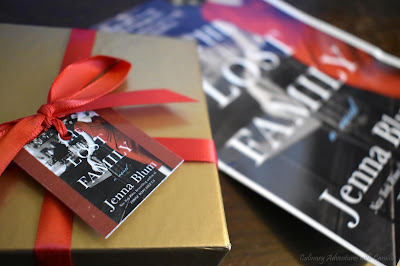 And, then, she sent us chocolates and a recipe because it's not a party without party favors, right? That's what my kids say anyway! Thanks for these.

On the Page
Jenna describes her book this way: "The Lost Family is a novel about a German-Jewish Auschwitz survivor named Peter Rashkin, who emigrates to New York, starts a restaurant, and falls in love—only to find his new American family haunted by the wife and daughters he lost during the war."

And I read through over 300 pages (riveted, by the way, but I'll get to that in a second) before it struck me. The title isn't just about the family that Peter lost when Masha, Vivian, and Ginger were ripped from his life during the war; the title also refers to the family that he has now. They are all lost. Peter, June, and Elsbeth are each lost and isolated in their own way. Rudderless, I might say.

Maybe Jenna didn't intend it that way, but I suspect she did.

Peter is driven. June is bored. And Elsbeth is a teenager. All of them crave something. I am not going to give away too much of the book. You should really just read it once it's released... just a few more days! But there are some passages that I wanted to share. These showcase her delicious prose.

"[Peter] turned to the flats of seedlings he had hand-selected from various Long Island farms. These vegetables were the staples of Masha's spring menu, and he thanked them silently as he tapped them from their black plastic containers, untangled their roots, and set each plant in the soil. The salad greens - Bib and Boston lettuce and arugula - should be ready by mid-May, along with radishes, and about a week later, spring peas, onions, and leeks. The others would ripen in summer; Big Boy and yellow cherry tomatoes; beets, fingerlings, sweet potatoes, cabbage, Brussels sprouts, squash, cucumbers, string beans. Peter checked each type of plant off the list on his notepad once it was in the ground" (pp. 101-2).

"Peter watched her, the smile fading now. Rain trickled down the window next to the bed, making shadows on his face. He was no longer the ghastly no-color he had been in the hospital, as translucent as if he were his own ghost, but his skin was still tinged the bluish white of the skimmed milk he disdained, claiming it tasted like water. ...She met her husband's inquiring gaze and held it, and she felt as if she were traveling an emotional umbilicus into him, arcing into what it must be like to be Peter, lying in this bed, helpless in this room; to be Peter in his kitchen, measuring, tasting, content; to be young Peter arriving in this country, an unwilling immigrant, pushed this way and that by shoving muscular crowds who had been born here, finding his way and place among them nonetheless" (pg. 289).

I found Peter the most compelling character, but it's the intersection and collision of the three Rashkins that's the centerpiece of the book. They collide, they repel, and they clearly attract, too. 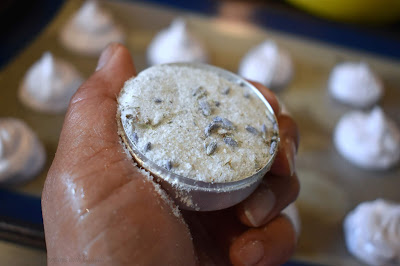 On the Plate
As Peter is a chef, there is no dearth of food in this novel. We see menus from his restaurant. There are meals over which the characters linger; there are meals grabbed in haste. We read about lavish, exotic dishes; we get a snapshot of June's midwestern fare - think olive loaf and A&W root beer!

And when I first read 'Little Clouds' on his menu from Masha's, I thought: meringues! Turns out that it was cream puffs filled with vanilla ice cream accompanied by mini chocolate fondue for dipping. But I still had meringues in my mind. Plus I had an abundance of egg whites from the base of my Fläderblomsglass (Swedish Elderflower Ice Cream). That recipe is posting soon, so stay tuned for that. 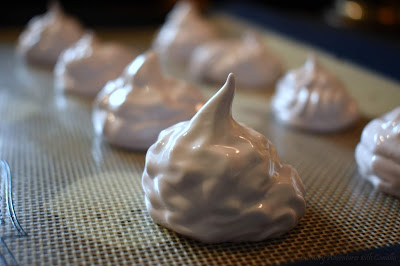 Given my incorrect assumption about the Little Clouds on Masha's menu, I still decided to go with meringues for the party. I did dress them up a little with a few drops of natural food dye and some lavender-vanilla salt that I had on-hand. 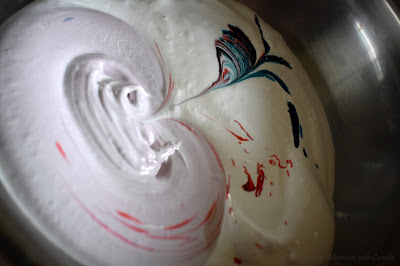 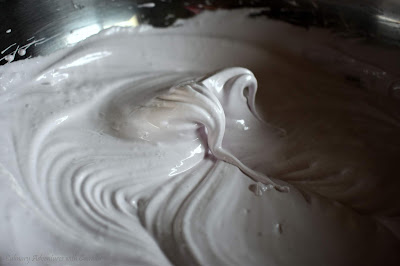 In a large mixing bowl - that's completely clean and grease-free - combine egg whites and tapioca starch. Using a hand-mixer, beat on low until mixture becomes foamy. Increase speed to high and add sugar slowly, about 1/4 C at a time, beating between each addition until the sugar is dissolved, approximately 10 to 15 seconds between each addition.

Beat until mixture is thick, shiny, and has doubled in volume. Mixture should have stiff peaks. Once you get stiff peaks, stop. Stir in food coloring, if using. 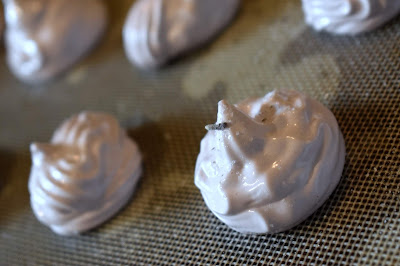 Fit a piping bag or tool the a large star tip. Transfer the meringue to the piping tool and pipe onto prepared sheets. The meringue cookies can be pretty close as they don’t spread. Sprinkle with lavender salt.

Bake for 1 hour. Then turn off the oven and leave the door ajar. Let cool in the oven for another hour. 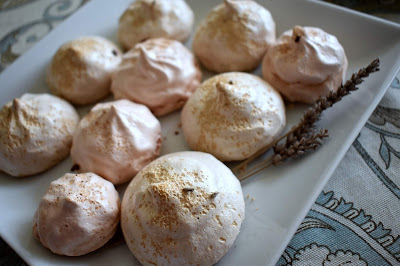 Meringue cookies should be crisp on the outside. Store them in an airtight container and keep them away from heat. Heat and moisture will often your meringues. 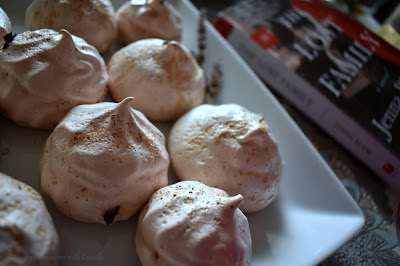 Enjoy with a strong cup of coffee...and a good book such as The Lost Family by Jenna Blum.

Find the author and sponsors...

*Disclosure: I did receive a complimentary, advance reading copy of The Lost Family by Jenna Blum for my participation in the  #TheLostFamilySupperClub party. Opinions are my own. I received no further compensation for this post.