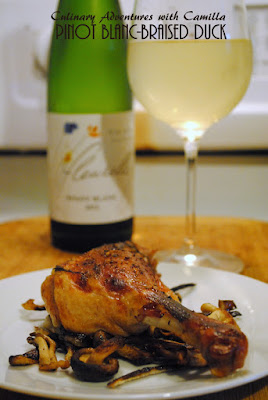 Welcome to the February event for The French Winophiles, a wine-swilling, food-loving group coordinated by Christy of Confessions of a Culinary Diva. We've made it around France. And by clicking on the following regions you can read my recipe post that includes the #winophiles round-up as well. So far, we've traveled - by tabletop and goblet - to the Loire Valley, Corsica, the Southwest, Languedoc-Roussillon, Côtes du Rhône, Bordeaux, Champagne, and Burgundy.

Today we're headed to Alsace. And, after this, we'll be going back through the regions with a little bit more differentiation in that region. Fun! I love this group! And I'm having so much fun exploring wines and recipes that are unfamiliar to me.


Alsace, due to its location on the border of Germany and France, has been subject to a series of political tug-of-wars for years and years. Here's what I mean: at the end of the Thirty Years' War, in the mid-17th century, Alsace was given to France. Nearly 250 years later, at the end of the Franco-Prussian War, Alsace was seized by Germany. Post-WWI, it was once again part of France...until 1940 when Germany reclaimed it. And, finally, with the end of WWII, Alsace became French again and has stayed so ever since. You can see the effects of this on-going conflict in the languages spoken, the architecture, the cuisine, and the wine.

The Conversation
Join us for a live Twitter Chat Saturday, February 20th at 11 am EST/8 am PCT. You may join in the revelry by following hashtag #winophiles. A Vôtre Santé!

Wine production in Alsace can be traced back to the Roman Empire. And nearly 90% of all Alsatian wine is white. The principal grapes are Riesling, Pinot Gris, Muscat and Gewurztraminer or Gewürztraminer; Alsatians prefer it without the umlaut, Germans use the umlaut. 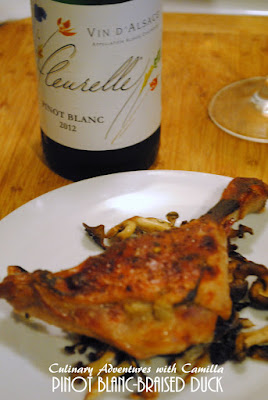 For this event, I selected a Pinot Blanc from Alsace. Pale yellow in color with the tiniest hint of green, the wine was clear and bright. On the nose, it was grassy with some floral hints. On the tongue, it was refreshingly dry with medium acidity. It opened up quickly and was a nice foil to my braised duck. 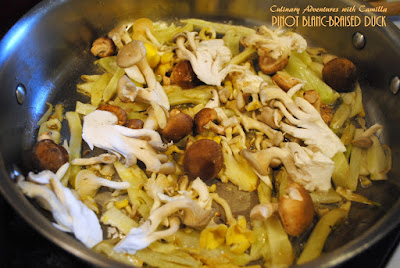 Procedure
Preheat oven to 375 degrees F. In a Dutch oven, heat a splash of olive oil. Place duck legs, skin side down. Turn heat to medium. Cook for 6 to 7 minutes until the fat is rendered and the skin golden and crisped. Flip to the other side and cook for another 2 to 3 minutes.

Remove the duck to a plate. Place the onions and 1 sliced fennel in the Dutch oven. Lay the browned duck pieces on top. Pour in the stock and Pinot Blanc. Bring to a boil, cover, and place in the oven. Braise for 90 minutes.

Raise the temperature of the oven to 450 degrees. Return the duck to the oven, uncovered and roast for 15 to 20 minutes until the duck is browned and the skin on top crispy. In the meantime, crisp your mushrooms with the remaining fennel slices. 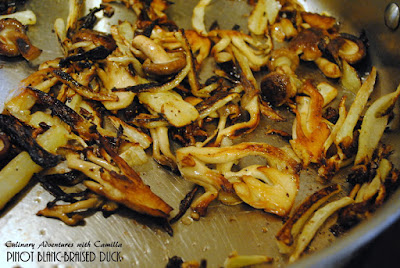 To serve, plate the duck on a pile of caramelized fennel and mushrooms. Serve immediately.
Posted by Camilla M. Mann at 9:30 PM