By Camilla M. Mann February 03, 2016
Tonight was the final week of my Artisan Pasta Class. Boo. But, I am a better pasta maker because of it...and it was nice to spend three evenings with a friend from college who is now teaching Culinary Arts at a local high school. She's amazing!

Today we made gnocchi which is technically not a pasta, but it's definitely under the pasta umbrella. We made Gnocchi with Gorgonzola Cream and Sweet Potato Gnocchi in a Brown Butter-Sage Sauce. Ummm...yum. We were split into different teams. Carolyn, Regina, and I were Team Gorgonzola Cream. So, I'm sharing that recipe. 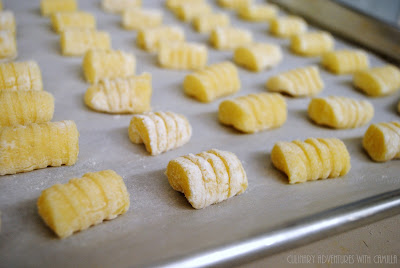 But first, a word about potatoes. I learned that there are three categories of potatoes: waxy, starchy, and all-purpose.

Who knew? Seriously. Who knew?! I certainly didn't. I used to buy potatoes because I liked the color I had no idea they had different properties or purposes. I feel smarter already. 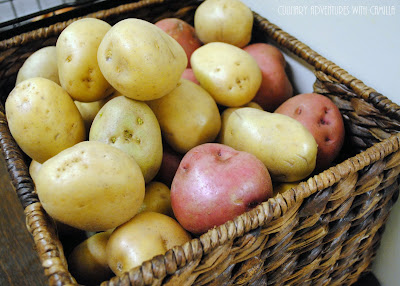 Every class I've taken with Jenn has me running to the store for a new gadget. I am not a gadgety cook, but I am all for becoming a better cook. So, when I took Jenn's truffle class years ago, I went right out and bought a scoop. After the first week of the Artisan Pasta Class, I bought a better food scale. And after this week, well, I think I might just need a ricer.

Using a ricer made the gnocchi smooth and uniform. I've made a lot of gnocchi in my time, but these were the best. They were what gnocchi should be. They were pillowy soft and almost melted on your tongue as soon as they hit your mouth. Outrageous. 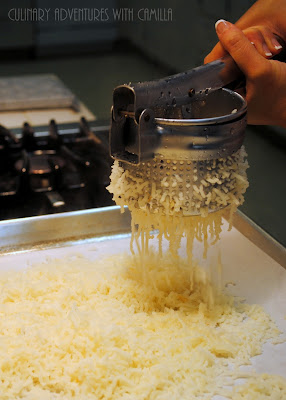 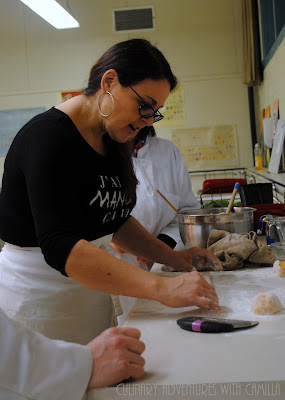 Gnocchi
Preheat oven to 450 degrees F. With a paring knife, poke each russset potato 8 times. Microwave potatoes until slightly softened at the ends, approximately 10 minutes, rotating potatoes mid-way through cooking. [Okay, I don't have a microwave, so I'll just roast them longer!] Transfer potatoes directly to the oven rack and bake until skewer easily pierces the potato, approximately 18 to 20 minutes.

Holding each potato with  kitchen towel, peel potato with a paring knife. Process potatoes through a ricer onto a rimmed baking sheet. Spread the potatoes into an even layer and let cool for 5 minutes.

Place 16 ounces of riced potatoes in a large mixing bowl. Using a fork, blend in the egg, flour, and 1 t salt. Combine until all the flour is incorporated. Press mixture into a rough ball. Transfer to a lightly floured counter. Gently knead until smooth, approximately 1 minute. 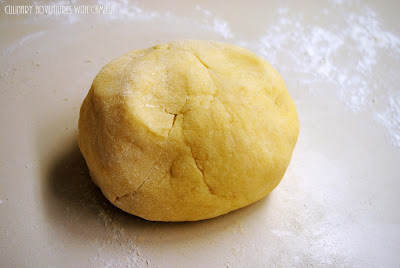 Cut dough into eight even pieces. Roll dough into 1/2" ropes and slice into 3/4" pieces. 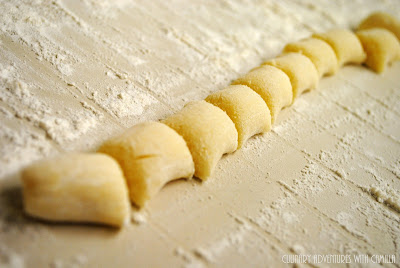 To form the gnocchi, press a piece of dough onto the tines of a fork. 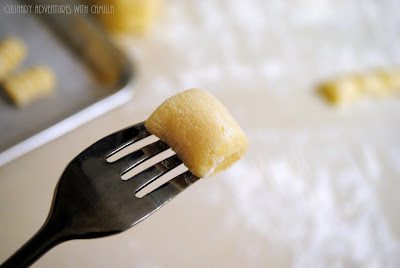 Use your thumb to create a dimple in the top of the gnocchi. Roll the dough down the tines to create gnocchi's signature indentations. Place on a parchment-lined baking sheet. 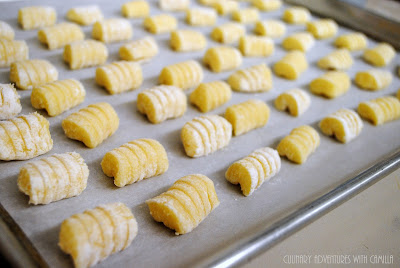 Once your gnocchi are rolled, make the sauce. 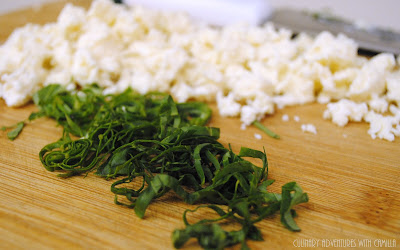 Gorgonzola Cream
Bring wine and cream to a simmer in a large, flat-bottom pan over medium heat. Stirring constantly, gradually add the gorgonzola and cook until melted and the sauce is thickened, approximately 2 to 3 minutes. Stir in the basil. Season to taste with salt and pepper.

To cook the gnocchi, bring water to a boil with splash of olive oil and 1 T salt. At a low boil, drop the gnocchi into the water and cook until they float, approximately 1 minute. 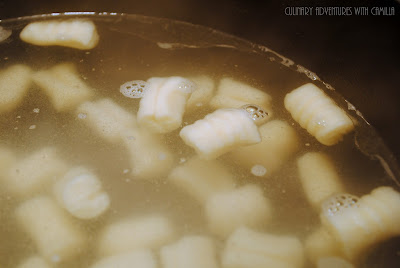 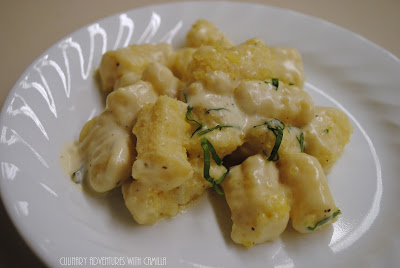