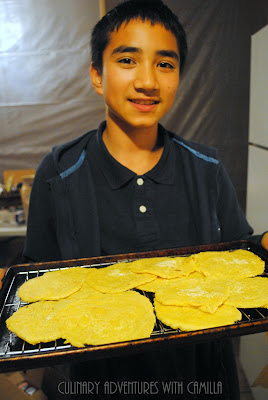 If you're Italian, you probably know who Befana is. If you're not, she's a good witch who brings presents to kids on Epiphany - January 6th. So, yes, I lie to my kids not only about Santa, in December, but about Befana, in January. I'm sure there's a special place in hell for this sort of parental deception.

Last year, R had been asking for a new tortilla press; his old one is aluminium and has some corrosion on it. I told him to just use parchment paper so our food doesn't touch the corrosion. But, behind the scenes, I found one made of wood and "Befana" left it for him.

Funny side note: he actually said, "Mom, I know you're not Befana because you told me I didn't need a new press. Befana disagrees with you." Okay.

So, one night a few weeks ago, at already 30 minutes beyond his usual bedtime, we had this conversation...

"Mom, I need to bring 35 tortillas to Spanish class tomorrow."

So, till almost 11 o'clock, he rolled, pressed, and cooked three dozen tortillas all by himself. I was amazed and oddly relieved that I didn't have to do it. 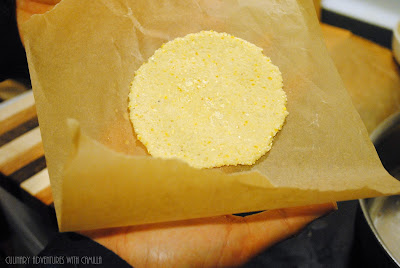 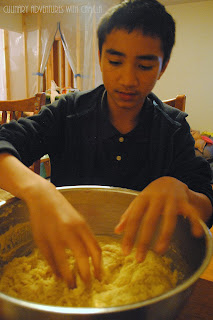 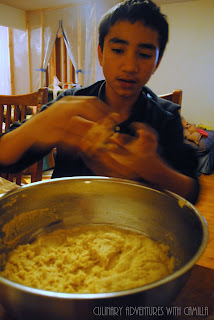 Procedure
Put masa flour in a large mixing bowl. Add water, salt, and olive oil. Mix in and let sit for 5 minutes or so. Begin working the masa with your hands to make the dough. Knead the dough for several minutes. If at any point through the tortilla making process the dough seems too dry or too wet, add a little more water or masa to the dough. Let stand for 30 minutes. 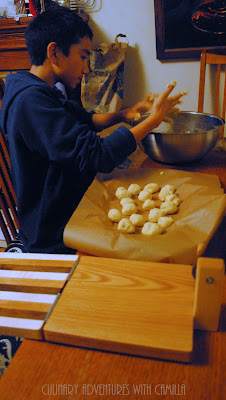 Take a piece of the masa dough and shape it into a ball the size of a plum, or slightly large golf ball. 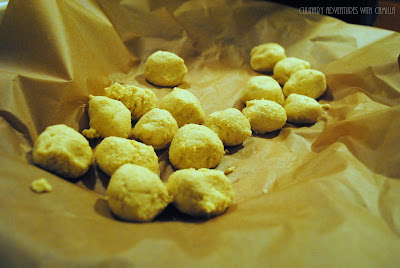 Take two pieces of wax paper or parchment paper and lay one on the bottom of the tortilla press. Place the masa ball in the center. Place another piece of wax paper over the masa ball. Gently close the press and press down, until the dough has spread to a diameter of 4-6 inches. 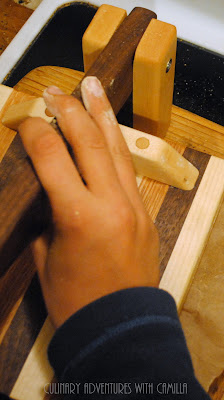 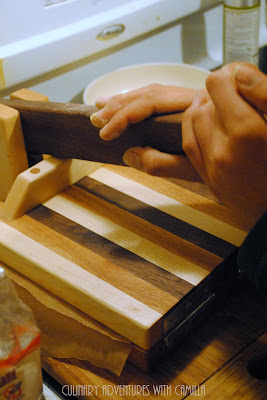 Heat a griddle or a large skillet on high heat. Working one at a time, hold a tortilla in your hand, carefully removing the wax paper on each side. Allow the tortilla to rest half on your hand, and half hanging down, and gently lay the tortilla down on to the skillet. Start working on pressing the next tortilla. Cook the tortilla on the hot pan for 30 seconds to a minute on each side. The tortilla should be lightly toasted and little air pockets forming. 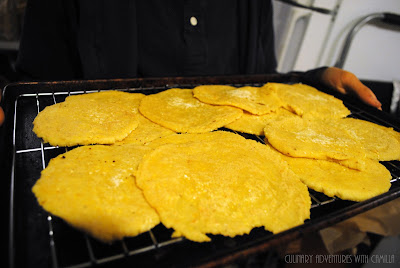 Just a note on "Befana's Tortilla Press" I found this one on Etsy at Central Coast Woodwork. It's fantastic, functional, and gorgeous. Thanks to my friend Shelby for the recommendation. 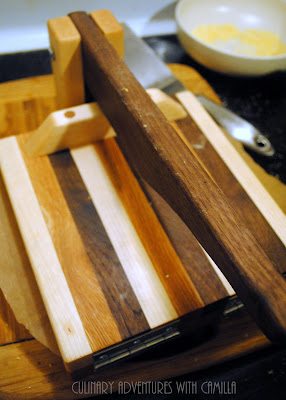