By Camilla M. Mann February 22, 2016
Inspired by the Quinoa & White Bean Salad I made with my Sun Basket ingredients earlier this month for #FreshTastyValentines, I decided to create a version for my friend's blueberry-themed baby shower. This salad teems with flavor and different textures. Another bonus, it was a great vegan entree for our one vegan friend in attendance. 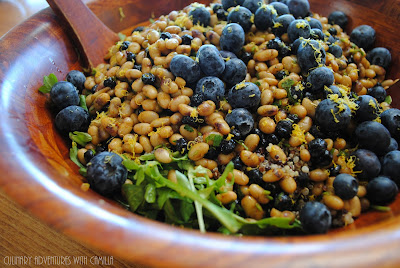 
Procedure
Quinoa
Cook till lightened and fluffy. I typically cook my quinoa in chicken stock, but for this vegan dish, I cooked it in water...the dish has plenty of other flavors. Let cool.

Navy Beans
In a splash of olive oil, cook the leeks until softened and beginning to turn translucent. Season with paprika, sumac, salt, and pepper. Fold in the beans and stir to coat. In a medium mixing bowl, stir together the seasoned beans, dried blueberries, and fresh cilantro. Let cool.

Lemon Vinaigrette
Place all of the ingredients, except the salt and pepper, into a lidded mason jar. Shake to emulsify. Season to taste with salt and pepper.

Assembly
In a large salad bowl, toss your arugula with the lemon vinaigrette. Spoon the cooled quinoa on top fo the arugula. Spoon the seasoned navy beans on top of the quinoa. Sprinkle with fresh blueberries and lemon zest.