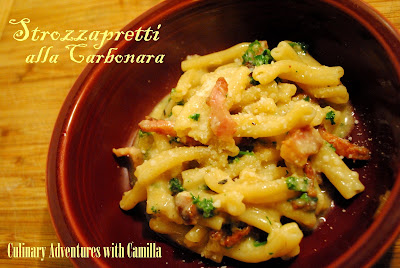 There are two "secrets" to making the perfect carbonara...and one of them is not cream. In fact, in authentic carbonara, there is no cream at all. Oh, so the two secrets: guanciale (that's salt-cured pork jowl) and acqua gassata (bubbly water). That's it.

Carbonara is fairly new to Roman tables, maybe a century old or so. Some attribute its creation to US troops in the post World War era for whom eggs and bacon were staples. The other school of thought is that it was invented by i carbonari (coal-carbon workers) as a quick, easy dish to be eaten during a lunch break. And yet another idea: the pepper in a carbonara resembles the coal...hence the name. 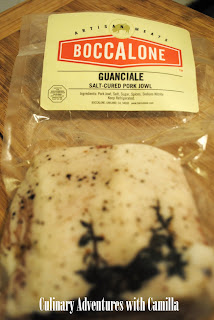 The only ingredients you need to make a true Roman carbonara are pasta of course, eggs, pecorino Romano (sheep’s milk cheese), guanciale (salt-cured pork jowl), and black pepper. I like to add fresh herbs as well. So, when we were at the Ferry Building in San Francisco and I saw guanciale at Boccalone, I didn't hesitate to grab some.

To make this dish you cook the guanciale in a pan. Let it cool. Beat the eggs with the grated cheese and pepper and add this cheese-egg mixture to the pan with the cooled guanciale. Once the pasta is cooked you heat the sauce again, adding the pasta to the egg-guanciale. Then you turn and toss the pasta, cooking the egg for just a few seconds. I read once that it takes only 100 giri...100 turns. 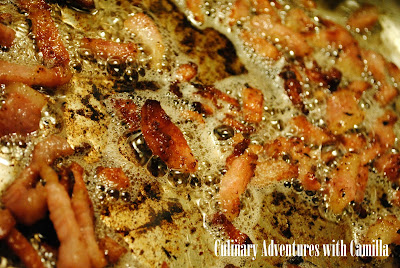 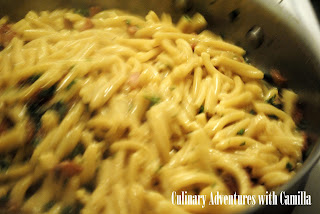 1 pound dry pasta ( I used strozzapretti instead of the traditional spaghetti or rigatoni)
4 fresh large eggs
1/2 C sparkling water
8 ounces guanciale, cubed
1 3/4 C fresh grated pecorino Romano
freshly ground black pepper
1 C fresh parsley, chopped
Heat a large, flat-bottom pan and add the guanciale Sauté until the meat is crispy, browned, and has rendered its fat. Turn off the heat. Add in the parsley and let cool. While the guanciale cools, cook the pasta till it's al dente. 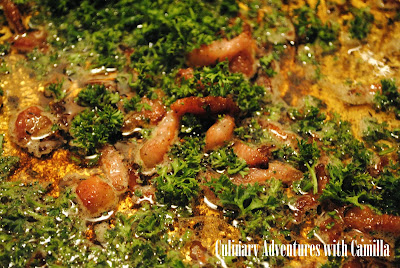 In mixing bowl whisk the eggs and  sparkling water until well-combined.

When the pasta is done, drain it and place it in the pan with the sauce. Turn the heat back on - to medium - and pour in the egg mixture. Agitate the pan until the egg begins to coat the pasta and thicken. It won't take too long...just a few seconds. Remove the pan from the heat and add 1 1/2 C of the grated cheese. use a wooden spoon to incorporate that into the sauce. Season generously with freshly ground black pepper.

Divide the pasta into bowls and serve immediately with the remaining cheese sprinkled on top. Pronto al tavolo! 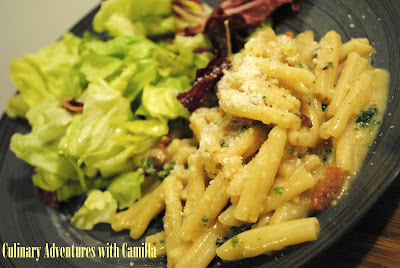