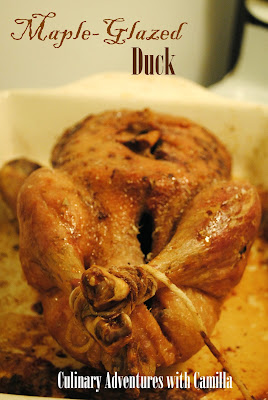 Remember how I neglected to take photos of our finished Roasted Duck with Hachiya Persimmon Glaze on Thanksgivukkah? Arrrgh. I never do that, but I was in a rush. So, I decided on a do-over. Sort of. Of course, I had to tweak it a bit. This time I did a simple maple syrup drizzle with hickory sea salt.

Here's a more detailed how-to...unwrap the bird and remove all of the giblets from the duck's cavity. When your duck is empty, rinse it under cold water. Pat it dry with paper towels. Sprinkle the cavity with some salt. I used freshly ground hickory sea salt from the Monterey Bay Salt Company.

With a sharp knife, score a diamond pattern into the duck skin on the breast. Slice very carefully - you want to cut through most of the fat without cutting into the meat. As luck would have it, a duck’s layer of fat is fairly thick. So this process is relatively easy once you get the hang of it. 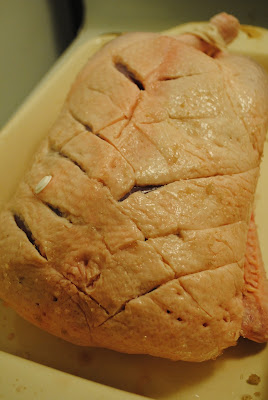 Poke the duck’s skin all over with a sharp knife, creating small holes through which the fat can escape more easily. Only prick the skin, try not to poke the meat.

It's time to truss the duck! Cross the legs and tie them together like this with a piece of butcher’s twine. 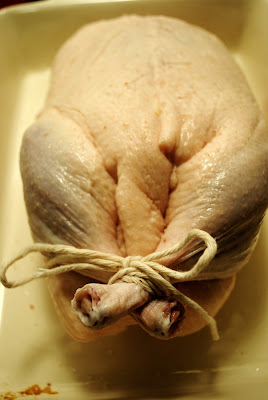 Now it goes into the oven, breast side up.

After the first hour, pull the pan out of the oven. The skin will still be pale, but should be a little bit crisp when poked. Pour off the duck fat into a separate container; I used a large mason jar. 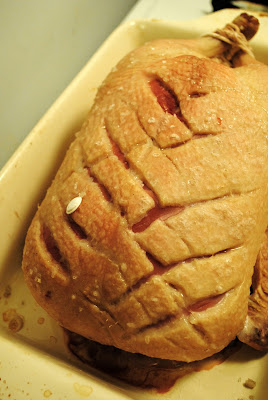 Prick the skin all over with a knife. When pierced, the skin should let out more molten duck fat. Make sure to get the area around the legs, which is particularly fatty.

After the second hour, pull the pan out of the oven. The skin will be browner, and more crisp. Prick the skin all over, again and flip the bird breast-side up. Pour off the duck fat again.

After the third hour, remove the pan from the oven. Your duck should be significantly browner and getting more crispy. Prick the skin all over, pour off more fat, and pop it back in the oven. Roast breast-side down for a final hour at 300 degrees. 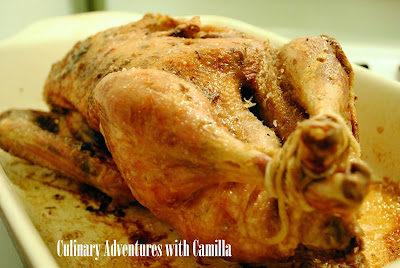 After the 4th hour in the oven, pull the pan out of the oven and raise the heat up to 400 degrees.

Brush the duck with maple syrup so that it's completely covered. Sprinkle with more hickory sea salt.

Stick your pan back in the oven, and roast at 400 degrees for 7-10 minutes - just until your duck is a beautiful brown color. Keep a close eye on it, and pull it out if it starts to burn. Dinner for tomorrow night is done!