Veggie Galette with a Caprese Topping 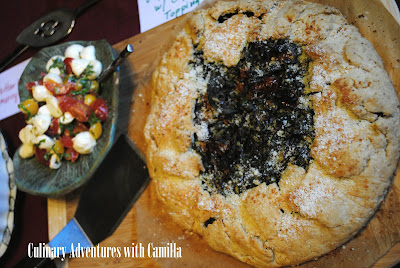 When I was invited to a friend's post-Christmas pie tasting party, I responded that I would bring one sweet pie and one savory pie. The discussions began around our dining room table: What makes a pie a pie?

Sensibly, Riley said, "A pie has no frosting." True.

Jake declared, "It's the crust." Okay.

And my sweet, Enthusiastic Kitchen Elf asserted, "A pie has a crust...and is low to the ground." Huh. "You know, a cake can be tall; a pie is short."

Employing all three of those criteria - no frosting, a crust, and low to the ground - a galette can qualify as a pie. So, I decided to make a veggie galette for my savory 'pie' offering.

I had a caprese tart in mind, but one of the things I love about caprese is its freshness. That didn't lend itself to a cooked tart. I settled on a veggie tart with a caprese topping. And since our hostess is mostly gluten-free, I went that route for my pâte brisée .


Pâte Brisée is a pastry dough/crust that has a rich flavor and a crisp, flaky texture. It is ideal for both sweet and savory pies, tarts, and quiches. Learn to make it. Stat. You won't regret adding it to your culinary repertoire.

I don't have a food processor, so I use a pastry blender and do it all by hand. Place the flour, ground cashews, and cold butter in a large bowl. Use the patry blender until the mixture resembles coarse meal, with pea size pieces of butter. Add one egg and ice water 1 T at a time, until mixture just begins to clump together. If you squeeze some of the crumbly dough and it holds together, it's ready. If the dough doesn't hold together, add a little more water and cut again. Note that too much water will make the crust tough. Once the dough comes together into a ball, wrap tightly in plastic wrap and refrigerate for at least 30 minutes before using. 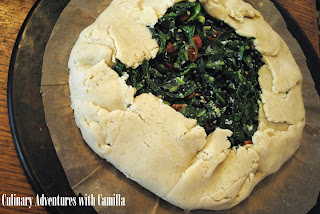 In a large-flat bottom pan, quickly wilt the greens with the garlic and a splash of olive oil. Once they are to your desired doneness, fold in your tomatoes and grated cheese.

Roll out the Pâte Brisée between two pieces of parchment paper, making a rustic 15-inch circle, adding more flour, if necessary, to prevent sticking. Transfer the crust to a baking sheet with the parchment or baking mat in place.

Leaving a 2-inch border, fill the crust and fold up the edges to make a free-form galette. Drizzle the top with olive oil, sprinkle it with freshly ground sea salt and freshly ground pepper. Bake in a 425 degree oven until lightly browned on the edges, approximately 50 minutes. Let cool at least for 10 minutes before slicing.

For the topping...
Stir together ciliegie and fresh tomatoes, both halved, fresh basil chiffonaded, and a pinch of fleur de sel and a splash of olive oil. 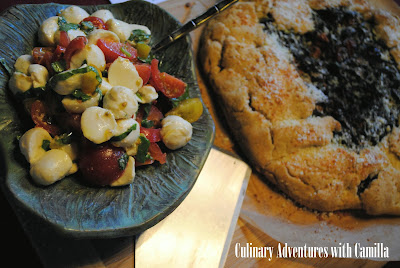 And pie or not, this was delicious...and a hit at the party!