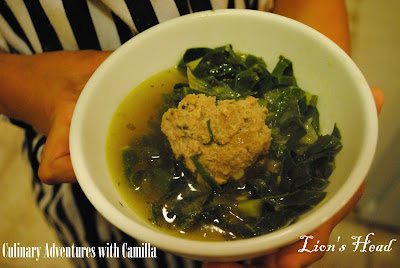 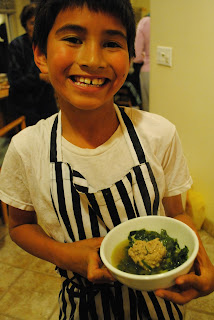 When the family festivities continued, they wanted to do a dinner at my aunt and uncle's timeshare. And they asked if the enthusiastic kitchen elf would make something. He immediately declared, "I'm going to make Lion's Head Soup for them, Mommy." And he did. He brought his own utensils, my pots, and the ingredients. It was a hit! I think the family was impressed with his culinary prowess. 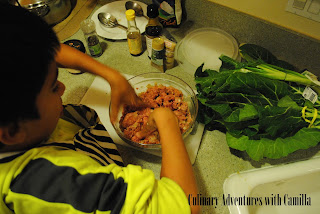 2. In a medium bowl, combine the turkey with the onion, garlic, shallots, ginger, and 2 T cilantro. Mix by hand until all is incorporated. Season with 5 T soy sauce and 3 T sesame oil. Add gluten-free flour and mix again. 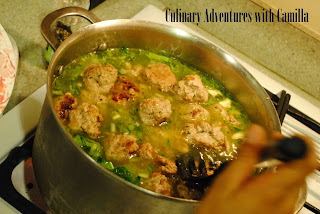 3. Form the meat into balls. Flatten them a bit so that they are not completely round.

4. Heat oil in a skillet or wok on medium-high heat. When the oil is hot, add the meatballs. Cook for 5 minutes until browned on the bottom. Turn and cook the other side.

5. In a large soup pot, saute the sliced baby onions until softened and turning translucent. Pour in the chicken broth and 1 T soy sauce and 1 T sesame oil. Bring to a boil. Add in the remaining cilantro.

6. Add the meatballs, reduce the heat and simmer, covered, for 15 minutes. Add the greens and mushrooms. Simmer for another 15 minutes or until the meatballs are cooked through and there is no pinkness in the middle.

To serve Lion's Head Meatballs, serve each meatball on a small bowl surrounding by the greens, or in soup bowls with some of the greens and broth.