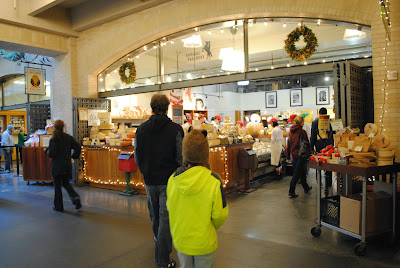 We never get close to the Ferry Building without going in and spending an obscene amount of money on tasty salted pig parts and cheese! Caseophiles all. It's probably a good thing that Cowgirl Creamery isn't closer to me; I'd just have to sign my paycheck over to them each month.

The boys grabbed a number and waited, impatiently, for their turn with the cheese specialist. "Number five?" one of them called. 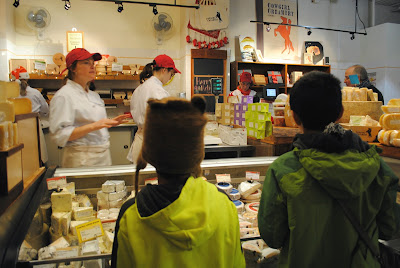 "I'd like to try a bleu cheese, please," said the Wombat.

She looked at him skeptically, then glanced over his head at me. I nodded. She shrugged and began to point out a few bleus. He asked, first, for the Colston Bassett Shropshire Blue. Though he did try the other bleus she offered, we took home a wedge of the Shropshire. 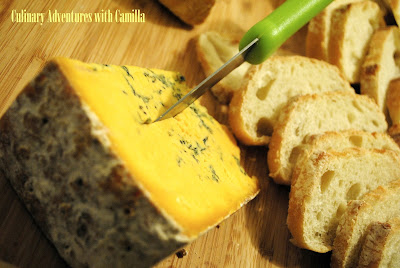 Shropshire Blue is a cow's milk blue cheese from the United Kingdom and is, technically, a cross between Stilton and Cheshire. The distinctive orange color comes from the addition of annatto seeds. Shropshire, while generally creamier and less nutty than Stilton, is sometimes stronger as well. What a cheese!

Riley asked for a suggestion on a brie, pointing at wedges of Mt. Tam. She urged, "Well, if you have a palate like your brother, I would have you try the Red Hawk. It's like the Mt. Tam, but aged for a month." He went for it. Click to read more about the Red Hawk: here. We bought a piece. 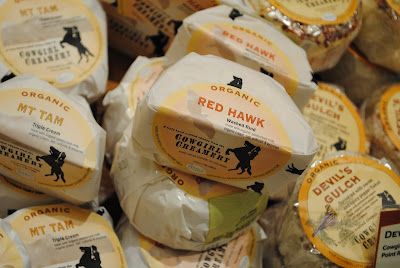 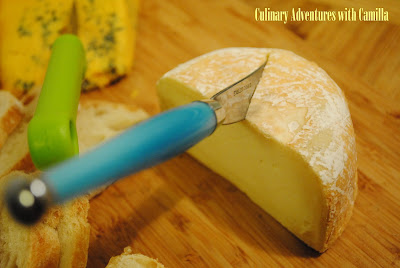 We also took home pieces of Barely Buzzed from Beehive Cheese in Utah and Capricorns, a peppercorn studded goat cheese, from Tumalo Farms in Oregon.