Cooking Around the World: Norway

By Camilla M. Mann September 05, 2013
Unlike most of the countries in our Cooking Around the World Adventure, I have actually been to Norway. A couple of times, actually. I had some good friends who lived there while I was in college and directly after. So, I flew there once, from Berkeley, for a self-declared long weekend. And I took the train from Rome when I was living and working in Italy a couple of years after that. The wife is Norwegian, the husband American. So, they split their time between there and here.

My memories of those two trips are hazy; my memories of the food and drinks are even more so. I remember going to a microroastery and espresso bar in Oslo. I do remember eating Pølse (basically hot dogs) rolled in lefse (flatbread) with mustard and raw onions. And I clearly remember, standing at at the edge of a frozen lake, debating which items to carry on my back while we skiied to her family's cabin. Akevitt won out over food. Yes, my priorities were way out of whack in college: booze over food.

Needless to say, I needed to find something kid-friendly for this adventure. And Dylan requested seafood. So, I stumbled across a recipe that looked delicious: Fish for a Prince (prinsefisk). 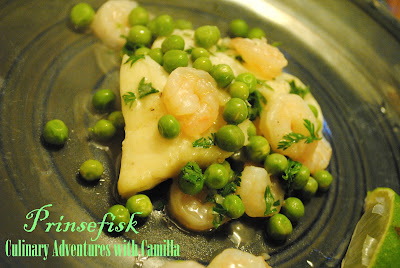 I had initially planned to make a Norwegian dessert, too, Prince's cake (fyrstekake). But time got away from me and I am cutting back on sugar. So, I'll stick with the main dish and call this country done.

Norway is in Scandinavia and lies above the Arctic circle. 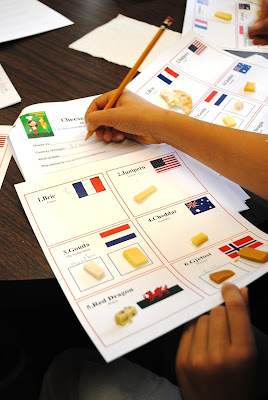 In Norway you will find reindeer, which are also called caribou. These animals use their antlers to scrape the snow away from the ground to find food. The caribou have four toes.

Arctic fox also lives in Norway; its coat changes with the seasons. In winter its fur is mainly grey and white, while in summer it changes to a light brown.

You can buy beer in grocery stores, but you have to buy wine and hard liquor at one place and one place only-Vinmonopolet (which literally means ´Wine Monopoly´).

Oh, one more thing...Norwegians have a delicious cheese that I love. It reminds me of caramel: gjetost. I had the students try it - during our Cheeses Around the World week during my Culinary Adventurers class.

These Global Table Ambassadors are signing off for now. With this, we've wrapped up the Ns; we're headed to Oman next. Stay tuned.