Lots of Memories and Lobster Mac'n'Cheese 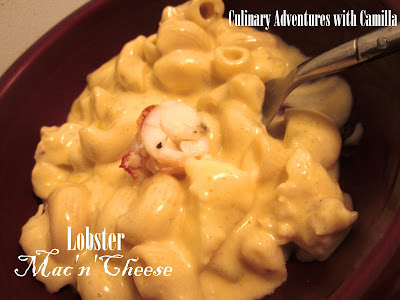 I wrote most of this on the 10th anniversary of that life-changing day. But - at the bottom - I get to the food part, the reason I'm posting this on this blog today.

Flight 77 made an indelible mark on my life. When Flight 77 crashed into the Pentagon on September 11, 2001, claiming nearly 200 lives, including the life of Suzanne Calley, I lost a great friend and mentor. I watched her husband, Frank Jensen, grieve. I watched my husband grieve. And I grieved myself.

Jake and I were in Cabo San Lucas with friends for a week-long vacation when we began to see news footage of the Twin Towers in New York burning. Because we were in Mexico, all of the reporting was in Spanish. Later we discovered an English-speaking channel. And, probably, like everyone else in the world, we were glued to the television sets. Day and night. They even had the news playing down at the resort's pool. Cocktails, chlorine, and tragedy are odd bedfellows, but they got us through the week.

With all that coverage - including the victims' names scrolling across the bottom of the screen - you would think that one of us would have seen her name. Suzanne Calley. But, for whatever reason, we never did. The border closed and we were stuck in Mexico for longer than anticipated. The evening entertainment at the resort began to repeat and by the time "Jesus Christ Superstar" started up for the third time, we drew the curtains and the guys poured some more tequila.

When the borders finally opened, tourists trying to get home flooded the airport, but I think we were all leary of getting on a plane. Two plane rides and a shuttle bus later, we opened the door to our townhouse, dropped the bags on the floor, and collapsed on the couch. It was then that we noticed our answering machine blinking. 27 messages. Seriously.

It's all a blur now, but I distinctly remember hearing Frank's voice, strained, holding back sobs. "Where are you guys? Zanne would know where you are. Call me. I need to talk to you." That was the first message...and the fifth...and the fourteenth. All the same but with increasing urgency at each call. All wondering where we were and why we weren't returning his call.

Then the series of messages from other friends made it clear: "I'm watching the news and they said that Suzanne Calley died on 9-11. Is that the Suzanne Calley that we know? Call me." "Cam, are you OK? Can you call me? I saw on the news that Suzanne was on one of the planes. Call me." Everyone wanted me to call them. But my knees buckled and I fell to the floor. All I could do was focus on breathing through my tears. Inhale. Exhale.

I finally did make those calls. I took even more time off work. I went to her memorial in Gilroy. But it wasn't till Jake and I accompanied Frank and other family members to the official memorial at the Pentagon in Washington, D.C., that it became real to me that I would never see Suzanne again. 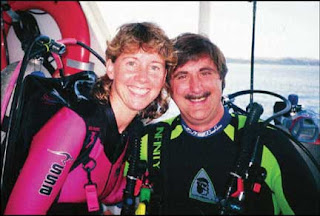 Zanne was an amazing woman in so many ways. Her passions for life, for diving, and for Frank were evident in everything she did. We spent almost every weekend for two years with them, learning to dive ourselves and, then, because we had worked our way up through the certifications, as Frank and Zanne's divemasters. On our non-teaching weekends, we would go up to their home in San Martin, I would cook dinner and we would drink wine, talk, and laugh a lot. We traveled with them. We spent time at their alpine cabin, skiing and building bone-breaking bobsled runs. And it was on the divetrip that they organized off the coast of Venezuela that Jake proposed marriage.

Though joyous events begin to fill the void made by a tragedy such as this, the loss is no less tragic. I now have Riley and Dylan. Riley's due date was June 11th, 2002, a miracle pregnancy after 18 months of infertility. That is another story on its own. But you can do the math and know that I do believe in angels. Frank is remarried to a wonderful gal named Deb. We have celebrated other friends' weddings and births. Life has gone on. And though time has made the pain less sharp, I still miss her. 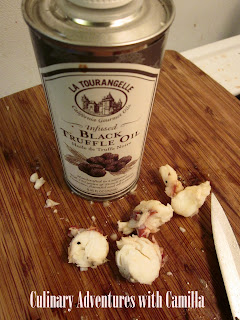 One of my favorite Zanne moments...we were talking about food. Not surprising, given the two of us. She admitted, "I can give up any food except cheese. I could never give up cheese." No wonder we were such fast friends!

But she also claimed that when I had kids, I'd give up my fanatical from-scratch ways and serve them mac'n'cheese from the blue box. I actually considered it today. For a moment. I told Frank this morning and he wrote: "WOW.  That is HUGE. Zanne always said you would give in eventually.  I would not have bet on 12 years."

However, it was a fleeting flirtation with a packaged, processed food. I didn't actually buy the Blue Box though I did make my own version of mac'n'cheese - with lobster and truffle oil - for dinner tonight. Here you go, Zanne. It's not from the Blue Box. But it is delicious. And I am eating it, sipping wine, and listening to James Taylor. Thinking of you.

Won't you look down on me, Jesus
You've got to help me make a stand
You've just got to see me through another day
My body's aching and my time is at hand
And I won't make it any other way

oh, I've seen fire and I've seen rain
I've seen sunny days that I thought would never end
I've seen lonely times when I could not find a friend
But I always thought that I'd see you again

I’ve been walking my mind to an easy time
My back turned towards the sun
Lord knows the cold wind blows it’ll turn your head around
Well, there’s hours of time on the telephone line
To talk about things to come
Sweet dreams and flying machines in pieces on the ground.

oh, I've seen fire and I've seen rain
I've seen sunny days that I thought would never end
I've seen lonely times when I could not find a friend
But I always thought that I'd see you, baby, one more time again, now

When I went searching for a "copycat Kraft Macaroni and Cheese" recipe, I found versions that called for "cheese powder" and Velveeta. I know I'm a food snob, but if I were going to use those ingredients, I'd just as soon buy the Blue Box, right? No thanks. Here's my version - creamy, cheesy, and not quite as orange. Oh, and I added some succulent chunks of roasted lobster and a splash of truffle oil. Definitely not from the Blue Box... 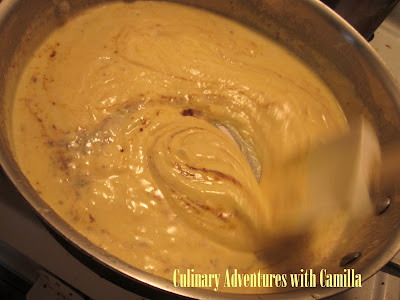 Preheat the oven to 350F. Using kitchen shears, cut each lobster tail down the back, stopping at the last segment before the tail piece. Bend back the tail until you hear a loud crack. Slip a knife between the meat and the bottom membrane, freeing tail meat from the shell. Pull the meat up and over the shell, closing the shell shut beneath it. The tail meat, then, piggybacks on top of the shell.

Coat the lobster meat with a generous coating of oil and sprinkle with salt and pepper. Bake for 1-2 minutes per ounce of weight, if fresh. It might take longer if the tail is frozen. Once your tails are cooked, pull out the tail meat and slice into bite-sized pieces. 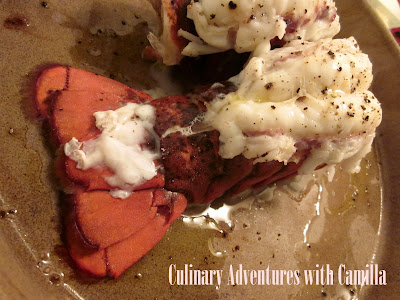 Then...start with the pasta...in a large stockpot, cook pasta according to package directions. Drain well.

While the pasta cooks, melt the butter in a large, flat-bottom pan over medium heat. When the butter has melted and has started to bubble, add in the garlic, then whisk in the flour. Cook for 1-2 minutes whisking constantly. Gradually whisk in the cream until no lumps remain. Reduce the heat to medium-low and cook cream mixture, whisking frequently, until it thickens and bubbles, about 8 minutes.

Remove pan from the heat and, by the handful, stir in the shredded cheese. Once all of the cheese is melted, stir in the marscarpone cheese. Season with salt, pepper, and paprika. Return the sauce pan to the heat and stir in the cooked pasta. Cook for 1-2 minutes over medium-low heat until heated through. Gently fold in the lobster pieces, reserving one piece per bowl for garnish. Add truffle oil and stir to distribute evenly throughout the pan. Dish into shallow bowls, topping each serving with a piece of lobster.