Toast: The Story of a Boy's Hunger {Food'N'Flix}

Anne-Marie from This Mama Cooks! is hosting Food'N'Flix this month. And her pick - Toast - is one I hadn't seen, so I was excited to watch something new-to-me. Click here to see Anne-Marie's invitation to her movie selection. So, one night, while I was waiting for Jake to get back from school and the boys were already in bed, I popped it in. 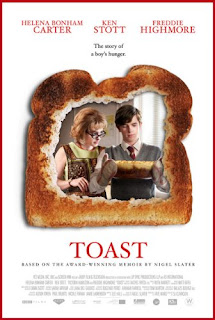 Based on the memoir, of the same name, by British food writer Nigel Slater, Toast is subtitled as 'The Story of a Boy's Hunger'...only his hunger is not for lack of food, but lack of affection.

Apologies in advance to any British friends. I have to admit that I was not overly enthused about this movie. British food, in my experience, is neither thrilling nor inspiring. I remembered a trip to London years ago when I was in college. I was shocked that a baked potato could be simultaneously as dry as the Sahara Desert and greasy. Yuck. Then I ate at an Indian restaurant one evening and ended up with food poisoning. I just remember running for the loo at the Wimbeldon Underground station. Double yuck. So, my horrific food-memories in Britain have probably soured me quite a bit on the cuisine.

While there were many things I could have made from this - I almost made Lemon Meringue Pie! - I decided to make the first dish that Nigel attempts for his dad, after his mom's death, because a school friend told him that the way to a man's heart is through his stomach. I have to agree with that!

While Nigel broiled the fish beyond recognition, I stuck with roasting at a lower heat and it was delicious. 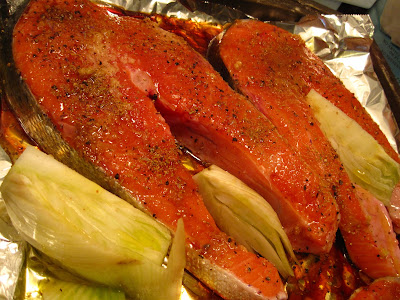 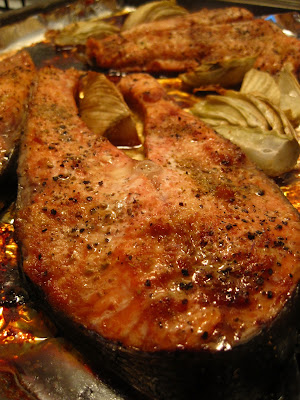 I kept the preparation simple...

To complement the fennel pollen, I cut two fresh fennel bulbs from my CSA box into wedges, placed them in the roasting pan along with the salmon, sprinkled them with freshly ground pink Himalaya salt, and drizzled them with olive oil.

Then I roasted it all in a 350 degree oven until the fish was opaque and bounced back when I touched it. I know that's very imprecise. Sorry. I didn't time it but would guess that it took between 30 and 45 minutes - these were hefty pieces of salmon.

And that was my Toast-inspired dinner: fennel pollen salmon, roasted fennel bulbs, and a quick salad topped with fresh tomatoes and sheep's milk fromage blanc.

If you want to join the fun, you still have time.
Submissions are due to Anne-Marie by September 30th.

And next month, Squirrel Head Manor is hosting. We'll be watching, or re-watching as the case may be, A Good Year. Hope you'll join the fun.