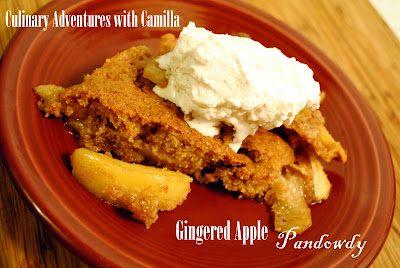 It's the first Monday of the month which means one thing: Secret Recipe Club reveal for Group A. While I was assigned - and cooked from - An Italian Cooking in the Midwest, there was some mix-up and one blogger was left without a partner. So, I stepped up to rescue the orphan.

Meet Wendy from The Weekend Gourmet. She has a ton of recipes that I want to try, including her No-Stress Lemon Panna Cotta, but I needed to cook and blog tonight to make sure she gets into the hop; so I couldn't make a recipe that requires overnight chilling. Bummer. But I have it bookmarked for another time.

Not only did this give the boys dessert mid-week - yes, they were super excited about that - but it offered me the chance to do some reading about fruit desserts. I've heard the term 'cobbler', 'crisp', 'crumble', and 'brown betty.' But if you asked me to differentiate them, I'd have to shrug my shoulders and smile. No clue.

According to What's Cooking America...here's the (paraphrased) scoop...it seems to me that the 'cobbler' is an all-encompassing term that includes some of the others. What do you make of this?


Cobbler: an American deep-dish fruit dessert or pie with a thick crust (usually a biscuit crust) and a fruit filling (such as peaches, apples, berries). Some are enclosed in the crust, others have a drop-biscuit or crumb topping.

With all that in mind...and really because I like the word...I adapted one of Wendy's recipes to make my own...


Preheat oven to 350 and butter a baking dish.

Stir until all the ingredients are combined. The consistency will be between a cookie dough and cake batter. Drop dollops of the dough on top of the apples and use a spatula to spread it over the apples. Don't panic if it doesn't completely cover the apples. As the pandowdy bakes, it spreads out.

Bake the pandowdy for 40-50 minutes, until the topping is golden brown and the filling is bubbly. 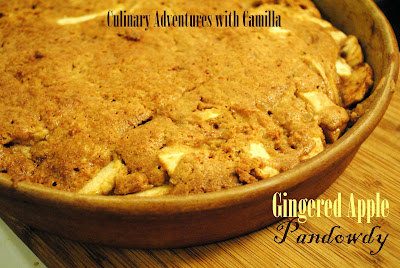 Whip until stiff peaks form. Serve the pandowdy with a dollop of the cinnamon cream on top.

This pandowdy was delicious albeit a tad on the sweet side! But the apples cooked up perfectly without getting mushy, and the topping was pillow soft. The ginger flavor wasn't overpowering, and it paired very nicely with the cinnamon in the topping and the whipped cream. I can't wait to make this again after we go apple picking!