Sweet Elena's Moqueca {In Your Backyard} 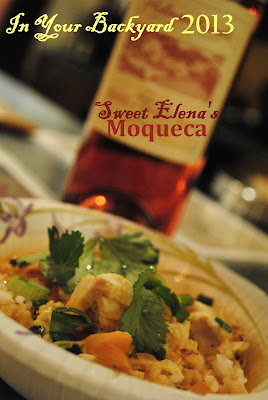 When we went to the kick-off In Your Backyard event for 2013 at Holman Ranch's Tasting Room, we watched Elena of Sweet Elena's make a Brazilian fish stew, moqueca. The smell, while she was cooking, was captivating; and when we finally got to taste it, it was amazing! Both boys insisted that when we cook South American for our Culinary Adventurers class at school that we make this. Sounds like a plan.

Brazilians have been making moqueca for at least 300 years. This dish is found in two different variations: moqueca capixaba from Espírito Santo, and moqueca baiana from Bahia. Moqueca is a Brazilian seafood stew based on fish, onions, garlic, tomatoes, and cilantro. It is cooked slowly, with no water added.

Here's the version that Elena cooked for us...and the version I'll be cooking with my class tomorrow. My mouth is watering just thinking about this.

Nick Elliott and Hunter Lowder, of Holman Ranch, paired this with their 2011 Rosé of Pinot Noir. Fruity flavor with subtle hints of cherry, strawberry and watermelon, it was a wonderful complement to the spicy soup. 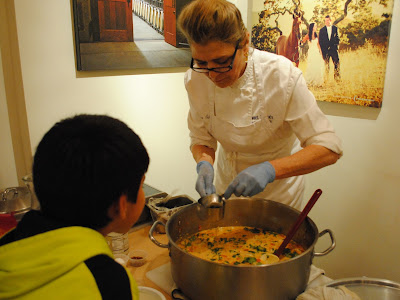 Marinate the seafood in the lemon juice and set aside. In a large souppot heat the coconut oil. Cook the garlic and herbs until they begin to give off a nice aroma. Add in the banana/plantain, bell peppers, and tomatoes. Saute until softened. Pour in the coconut milk and season with more lemon juice and paprika. Place the fish/seafood on top and simmer, covered, to cook through.

Serve in a bowl with rice and a sprinkling of cilantro.
Posted by Camilla M. Mann at 10:13 AM