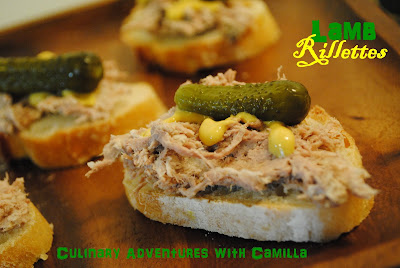 While working on my latest cookbook review, I was introduced to rillettes. Rillettes are savory meats or fish that have been braised or prepared as confit. I made wild boar rillettes. So easy, so flavorful! When I found myself with some lamb from the EcoFarm Butchery Seminar (click to read my piece - From Carcasses to Culinary Masterpieces -  for Edible Monterey Bay), I decided to make some lamb rillettes.

I started with the lamb, rubbing it with a mixture of ground ginger, ground cardamom, ground coriander, and ground cinnamon. I placed the meat in a baking dish and filled the pan with water so that it covered the meat three-quarters of the way.

Cover the pan with foil and place in a preheated 225 degree oven. Let the meat braise for 8 hours. Let it cool for  a little bit, then, with a fork, shred the meat into a mixing bowl and blend in room temperature butter. While the original recipe called for lard, I subbed with butter. Season with salt to taste.

Now here's where the flavors really begin to sing: serve the meat with crusty bread, pickles, and mustards. Cornichons are traditional. Another hit, inspired by Jesse Griffiths' Afield.