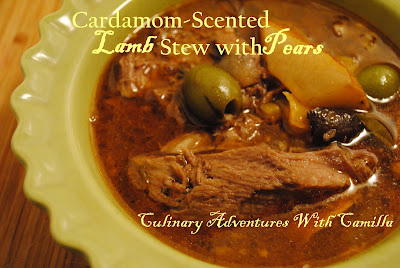 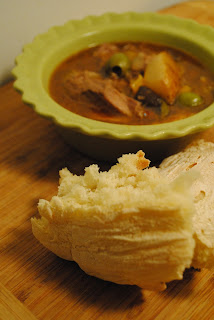 I've been dreaming about lamb tagine. Silly, because I don't own a tagine. But, with the last of the lamb from the EcoFarm Butchery Seminar (click to read my piece - From Carcasses to Culinary Masterpieces -  for Edible Monterey Bay), I decided to make lamb stew...tagine-style: slow cooked and braised at a low temperature.

I braised the lamb in chicken stock and red wine for three hours - until it was buttery soft and easily cubed with a spoon. I left it in the cooking liquid that remained. To the pot, I added in 2 C ratatouille, 1 C green olives, and 2 red pears (cored and cubed).

I simmered the stew until everything was soft and hot. Then I seasoned it with ground cardamom, freshly ground salt and pepper, and served it with some crusty bread.

This had all the characteristics of a tagine, without being cooked in the tagine pot. It was exactly as I envisioned dinner!