By Camilla M. Mann February 04, 2013
It's time for the February Secret Recipe Club. Woohoo! Meet Raina of Connor's Cooking who loves cooking and baking for friends and family. She writes, "Sometimes it's a hit and sometimes it's a miss, but being in the kitchen is one of my favorite ways to spend my time." You gotta love a gal who admits to kitchen flops.

Raina and I had crossed paths last year when she was assigned to my blog - in August - and whipped up some hoecakes based on my family's tradition of hoecakes for Presidents' Day. But this was my first time exploring her culinary creations.

Not edible, but I love that she has a recipe for Oobleck on her blog. While you can't ingest oobleck, it is fun, fun, fun; it's a slime that has properties of both liquids and solids. Though I didn't have a chance to make it this month, I have before. The boys love it. Click for Raina's slime recipe: here.

When I was searching for something to cook for the SRC, I was enamoured with every single one of her recipes in her 'alcoholic beverages' tag. I really wanted to whip up a batch of her Rhubarbaritas. But, unlike other people who seem to have a stash of rhubarb in their freezer (green with envy over here!), I cannot keep rhubarb for longer than the season. We eat it all! And our growing season here on California's central coast is brief. I also liked her Orange-Julius, Adult-Style. But the recipe that won out and inspired me this month was her Sangria. I've made sangria before; I made a jug of Cherry-Chardonnay Sangria as liquid courage during our adults only kickball tournament last summer. So, I went with that. I just winterized Raina's creation a little bit, serving it warm and changing the fruits with what was in season... 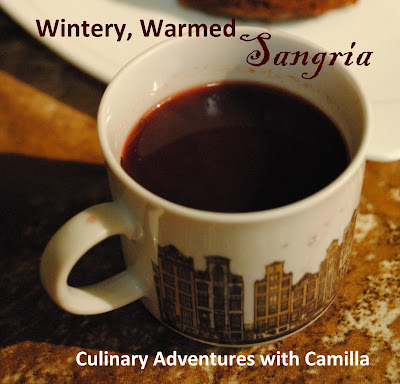 In a small pan, bring sugar and water to a boil. Place all the fruit in the syrup. Place the wine and water into a large souppot and bring to a simmer. Add the fruit and simmer for at least 20 minutes. Turn off heat and let steep for 30 minutes to an hour. Add in the vodka and rewarm the drink. Spoon into mugs and serve warm.

Though you can't see all the yummy fruit in the photo - sorry, I should have used a clear mug! - this was fantastic. And all that boozy fruit at the bottom of the drink was my favorite part. Thanks, Raina, for the inspiration.