Cooking Around the World: Kugelis {Lithuania}

By Camilla M. Mann February 21, 2013
We're moving forward in our Cooking Around the World Adventure, traveling to Lithuania by tabletop for dinner tonight. While I toyed with the idea of making Bulvinial Blynai, Lithuanian potato pancakes, potato pancakes are generally met with wrinkled noses and the admonition, "Mom, you know that potato pancakes are not our favorite." Yeah, I know. So, to avoid, that interchange altogether, I opted for Lithuanian's national dish: Kugelis, potato pudding. 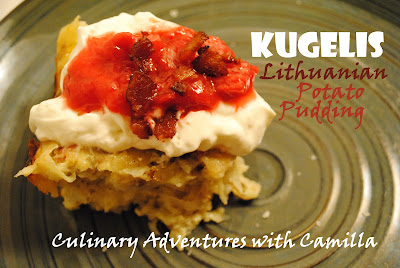 Traditionally served with sour cream, lignonberry sauce, and more bacon bits, I swapped out the lignonberry for some fresh rhubarb sauce I had made. 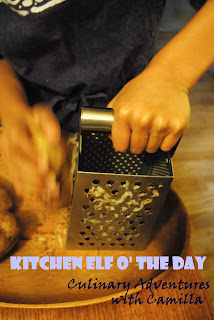 I used lots and lots of culinary license with this. How can you go wrong with potatoes, bacon, and eggs, right? So, my proportions might be "all wrong" for a traditional kugelis, but it was delicious! And Dylan, my kitchen elf of the evening, helped me out with all the grating.

Preheat the oven to 350 degrees. Reserve 2 T of bacon for garnish. In a large, flat-bottom pan cook your onion and bacon until the bacon is cooked through and the onion caramelized. In a separate pan, cook the remaining bacon till it's crispy. Grate the potatoes and stick in salted water to keep it from oxidizing. 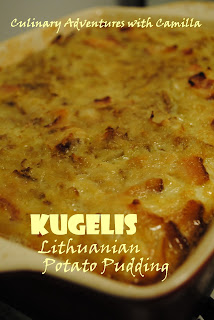 In a large mixing bowl, whisk the remaining ingredients together to form a batter. Butter a 9" x 13" baking dish. add in the potatoes and bacon-onion mix. Cover the dish with foil and bake, covered, for appoximately an hour - or until the pudding is firm. Remove the foil and bake until the top is golden brown, approximately another 15-20 minutes. 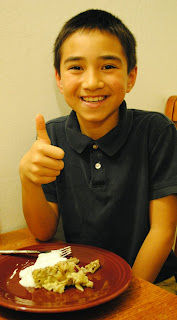 Serve with a dollop of sour cream, a spoonful of rhubarb sauce, and a sprinkling of crisped bacon. This got a thumb's up from Riley!

A bit more about the country...

The colors on Lithuanian's flag are yellow, green, and red. The yellow stripe represents the sun, Lithuania's wheat fields and prosperity; the green symbolizes the country's forests, flora and hope; and the red stands for the blood spilled for independence, courage and the people's love and loyalty for Lithuania.

Fun Facts About Lithuania
These Global Table Ambassadors are signing off for now. We'll be heading to Luxemborg to wrap up the L countries of the world. Movin' on...