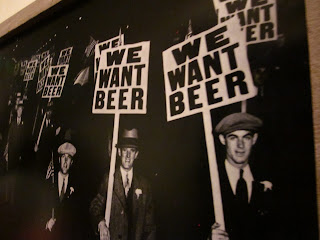 Most of the time I write about food, sharing a recipe about something I've cooked or an ingredient I've discovered. This morning I'd like to tell you about a beer that I had last night.

Jake and I met up with a guy I went to high school with, Dave, and his wife, Lori, at the Cannery Row Brewing Company. After perusing the menu for an eternity - yes the waitress came by almost half a dozen times while we stared at her blankly - we all decided on a flight of beer. There were just too many choices that looked good to commit to a full pint. 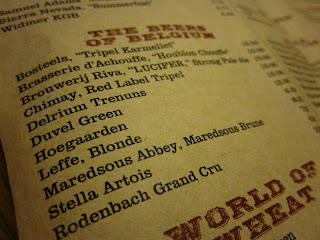 Both couples opted for the flight of Belgian beer that included six 3.5oz glasses.

By far, my favorite was Rodenbach's Grand Cru, a sour beer. Not knowing anything about sour beers, I later read a bit on Beervana's blog, discovering that sour beers began their trend a couple of years ago. Like most new trends, there are hits and there are misses. This one was definitely a hit for me. It was like drinking a sweet tart. Hints of cherry. Sour. Delicious.

I began to regret that we only had three and half ounces, and I had to share with Jake. Thankfully his favorite was Bosteels' "Tripel Karmeliet" on the other end of the flavor spectrum. So I didn't have to share as much of the sour beer as I could have! Pairing our beers with a burger, truffle fries, and salad, I was a happy girl. Cin cin.
Posted by Camilla M. Mann at 10:29 AM