By Camilla M. Mann December 03, 2020
This is a sponsored post written by me on behalf of the #CabFrancDay event sponsors.
Complimentary wine was provided for this post and this page may contain affiliate links.
However, all opinions expressed here are my own. 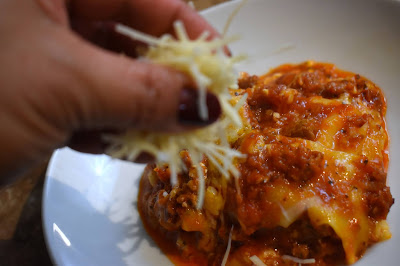 I received two bottles of the 2015 Cabernet Franc from Shale Canyon* in preparation for this #CabFrancDay event. Had we not been in the middle of the coronavirus pandemic, I would have poured them for two of my best friends' birthday dinner. More on that soon; first a bit about this event, #CabFrancDay.

Celebrating Cabernet Franc
The idea of this event - #CabFrancDay - is to celebrate the Cabernet Franc grape and show that it's more than a blending grape. You can read what Lori of Exploring the Wine Glass posted about supporting Cab Franc Day. She also shared why she picked December the 4th. "Cabernet Franc is believed to have been established in the Libournais region of southwest France sometime in the 17th century, when Cardinal Richelieu transported cuttings of the vine to the Loire Valley. December 4th is the anniversary of Cardinal Richelieu’s death." 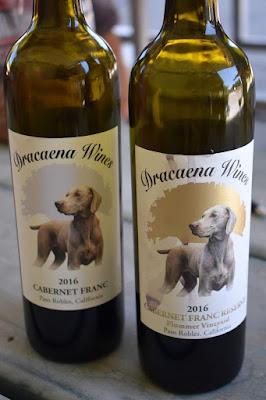 My first real exposure to Cabernet Franc, fittingly, was to Lori's wines: Dracaena Wines. There is no mystery why she is the force behind #CabFrancDay; she makes some great Cab Francs. 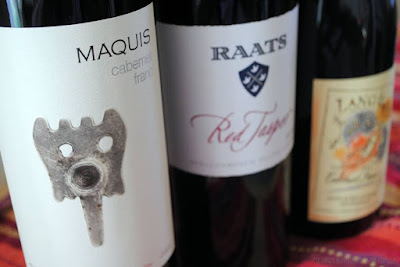 Cabernet Franc has long been viewed as a blending variety and is most often used with Cabernet Sauvignon and Merlot in making Bordeaux-style wines. However it is gaining momentum as a single varietal all around the world. I have tried Cabernet Francs from Chile, South Africa, and California.

Being related, Cabernet Franc and Cabernet Sauvignon share some marked characteristics; but it's really the differences that intrigue me. While Cabernet Sauvignon can lean to inky in color, Cabernet Franc is usually lighter in pigment. The latter also seems to be more floral on the nose and less tannic on the palate. It's definitely a food-friendly wine that deserves to be fêted. I will certainly have December 4th on my calendar for next year's celebration. Cheers. 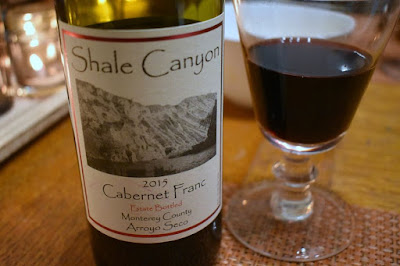 It's almost embarrassing to admit that the samples I received - from Shale Canyon Wines - are from my own state and even my own county. In fact, their tasting room is about ten minutes away from my house. And I had never tried any of their wines or visited them. Once the world opens back up, I will have to remedy that.
Shale Canyon Wines began in 2008 with small lots of hand-crafted varietals.  Their main foci were on single-varietals such as Chardonnay, Syrah, Cabernet Sauvignon, Merlot, Petite Sirah, Zinfandel, and the grape variety du jour: Cabernet Franc.  For nearly a decade, the winemaking charge was led by Ken Gallegos who retired in 2016. Sadly, Gallegos passed away earlier this year. So, when I uncorked this, Jake and I lifted a glass in his honor.
Now, Shale Canyon Wines is a collaboration of Keith Prader, the winemaker, and Tim Prader, the tasting room and vineyard manager. The wintery is completely off-the-grid, powered by the sun; they do have a back-up generator as needed. But I appreciate the commitment to being more self-sufficient.
This 2015 Estate Cabernet Franc starts has an interesting nose with red fruit and a tinge of wood. On the palate, there is a balance of red and black fruits with a rich bitterness of chocolate. And on the finish, solid spices and earthiness.
I think it was the earthiness that came through for Mike when he texted: "Delicious! The wine is really good...furry with a humidity often found in wines stored underground." Okay. I'll go with that. Now on to why I'm getting tasting notes via text!
Socially-Responsible Birthday 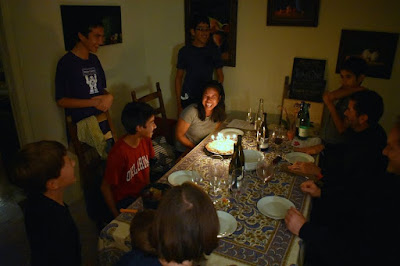 Throwback to our 2017 joint celebration for the November babies

Every year I host a joint party for both Mike and Pia. And, at least for the past few years, they have requested lasagna. But, as the world continues to battle this virus, having three households around a dining table is not smart. For my own birthday, in May, I hosted a party via Zoom! Though it was nice to see my friends' faces and hear their voices, a virtual party just isn't as fun. And I didn't get to cook for everyone. Boo. 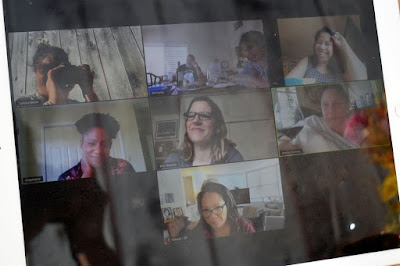 In any case, for Mike and Pia's birthdays, I decided to deliver lasagna to them for a socially-responsible birthday celebration. 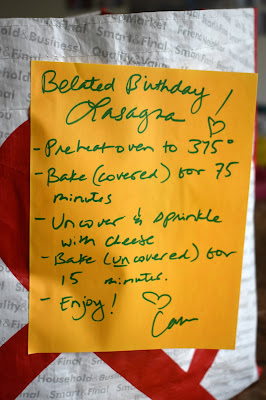 I wrapped them up, packed extra cheese, and offered cooking instructions so they could serve it piping hot whenever they decided! 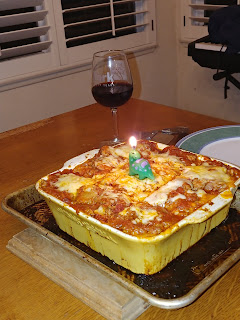 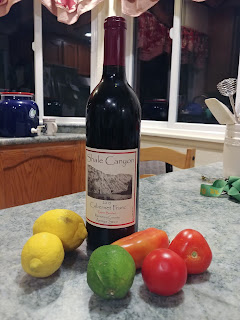 photos courtesy Jenn G.
My delivery - to Mike and Jenn - included the second bottle of Cabernet Franc with the proviso that I needed a photo and tasting notes...just as if they were sitting at my house discussion the wine! Jenn sent me the photos above. 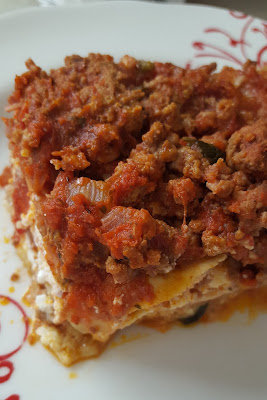 photo courtesy Pia G.
Pia, who is not an avid fan of wine, just received the lasagna. She sent me the photo of her serving. 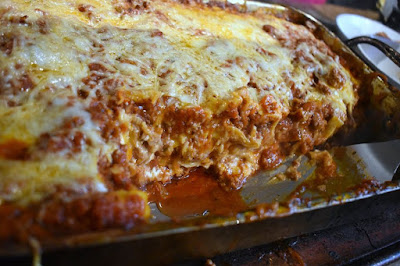 So, this definitely was not the same as having all them over to my house for a big lasagna birthday dinner. But, for this year, it will have to suffice. They always ask, so this is a three meat, seven cheese lasagna.
Ingredients makes 1 pan; I doubled this for the lasagna deliveries 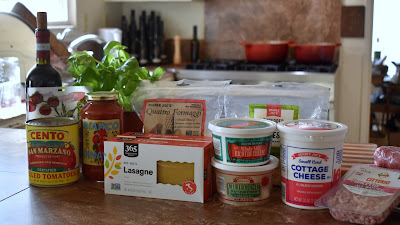 Procedure
In a large, flat-bottom pan, sauté the onions, fennel, and pancetta in a splash of olive oil until the onions are softened and translucent. Add in the ground meats and cook till browned through completely.

Add in the tomato sauce, wine, water, and cooked sausages. Bring to a boil. Reduce the heat to a simmer, stir in herbs, then season to taste with salt and pepper. 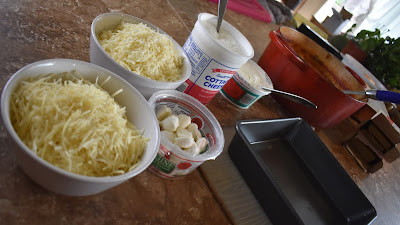 Preheat oven to 375 degrees Fahrenheit if you are going to bake as soon as you've assembled. Or, once these are assembled and the sauce is completely cooled, they can be covered and refrigerated until ready to bake. 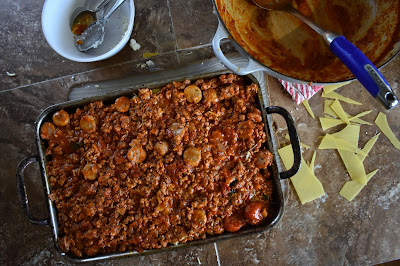 To assemble the lasagna, layer meat sauce, noodles, shredded cheese blend, cottage cheese, fresh mozzarella, ricotta, and more meat sauce. Repeat till your pan is full though the last layer should be meat so that the noodles are completely covered.
Cover with foil. Bake in the 375 degree F oven for one hour. Remove the foil. Sprinkle with shredded parmesan. Return pan to the oven for another 10 to 15 minutes until the sauce is bubbling and the cheese melted. 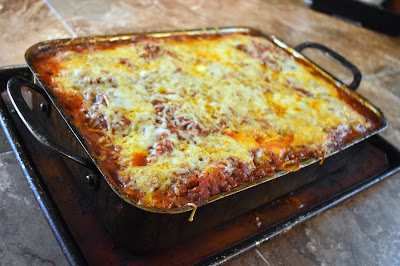 Let cool for 10 to 15 minutes before slicing. Serve hot. 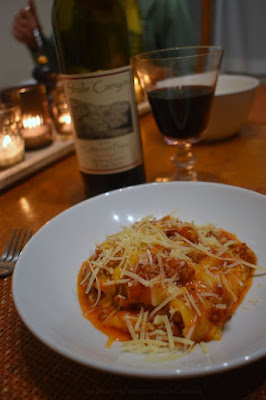 Many thanks to Lori of Exploring the Wine Glass for organizing and spearheading #CabFranc Day; to Shale Canyon Wines for the samples; and to all the other wineries for participating. I'll keep an eye out for your bottles throughout the year. Cheers! 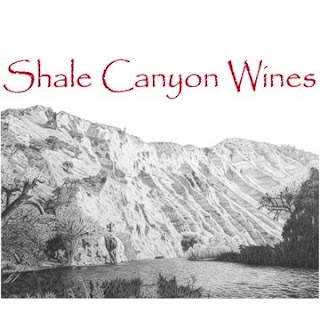