By Camilla M. Mann December 04, 2020
This is a sponsored post written by me in conjunction with the Consorzio of Prosecco Superiore DOCG.
Wine samples were provided for this post and this page may contain affiliate links 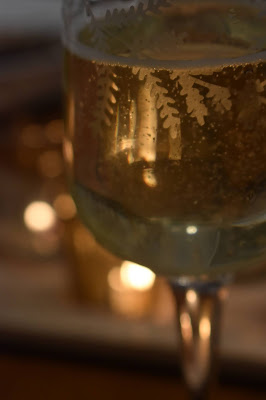 This month, I am leading a discussion for the Italian Food Wine Travel bloggers about sparkling Italian wines...just in time for the holidays.
You can read my invitation, here. You'll find more details in that post about the difference between Frizzante and Spumante; the different processes of creating bubbles - Metodo Classico, or Metodo Champenoise, versus Charmat, or Martinotti Method; and, while Prosecco is probably the most well-known Italian sparkling wine, at least in America, there's an entire range of Italian sparklers, including Prosecco Superiore or Prosecco DOCG, Lambrusco, Franciacorta, and more.
A few bloggers received a selection of Prosecco Superiore from the Consorzio of Prosecco Superiore DOCG*, but everyone was free to explore any and all sparkling wines from Italy. Here's what the group is sharing...
And we'd love to have you join the live Twitter chat on Saturday, December 5th at 8am Pacific time. Follow the hashtag #ItalianFWT and be sure to add that to any tweets you post so we can see it.
Celebrating with Conegliano Valdobbiadene Prosecco Superiore Amidst the Pandemic 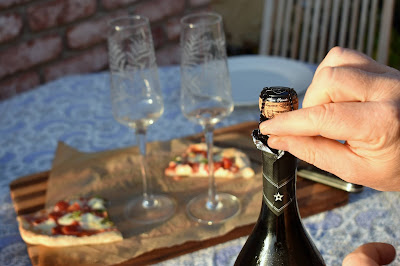 Italian bubbles have been my celebratory libation for years. Back in March - three days before California was locked down with a shelter-in-place order!! - I hosted a birthday dinner for one of my best friends. As it was March 14th - or 3.14 - I opted for a Pi Day menu. Little did I know that that would be the last time in 2020 that I would have friends around my dining room table. It's been a lonely year for sure.

Every celebration after that - during our efforts to squash the coronavirus pandemic - has been virtual. Or we have delivered dinner to friends and family, gone home, and eaten the same menu...just in the safety of our own home. And, for most of those pandemic celebrations, I poured a Conegliano Valdobbiadene Prosecco Superiore - grazie mille to the Consorzio - to make things feel more special and lively!

Let's start with a little primer about Prosecco...

DOC vs. DOCG
There are two classification labels for Prosecco - DOC and DOCG. And, if you understand the difference, you'll know what to look for this month...and moving forward. On the map, above, you can see that the green area is the DOCG; the brown is the production area of DOC.
DOC is the acronym for Denominazione di Origine Controllata while DOCG means Denominazione di Origine Controllata e Garantita. The latter is more stringent with a much smaller production area. Where DOC production covers nine areas including four provinces of Friuli Venezia Giulia and five in the Veneto, the production area of DOCG is restricted to the Conegliano Valdobbiadene area, a hilly area in northeastern Italy approximately 30 miles from Venice. DOCG guidelines also require that government licensed representatives must taste the prosecco before it is bottled.
Prosecco DOCG is the highest level of quality of all Proseccos. In order to be classified as DOCG, a Prosecco must be produced with Glera grapes from vineyards in a very specific area, covering 15 communes, smack in the center of the entire, larger Prosecco region.
The Grape: Glera
In the past, the grape used to make Prosecco was called both 'Prosecco' and 'Glera'. It's a thin-skinned green grape has been grown in the Veneto and Friuli regions of northern Italy for hundreds of years. Some say it's native of Slovenia.

In any case, its bent toward higher acidity makes Glera well-suited for sparkling wine. It boasts a lovely perfume of melon, summer stone fruits, and light florals.
Fathers' Day 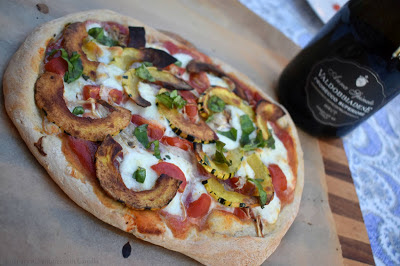 For Fathers' Day this June, I served Hand-Stretched Pizzas + Anna Spinato Valdobbiadene Superiore DOCG Brut. That delicious yeastiness of the wine was a perfect match to my sourdough pizza crust. 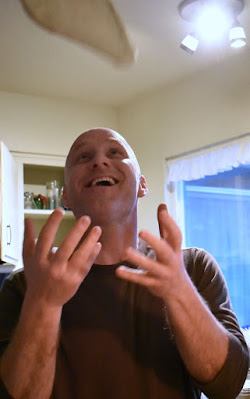 And I even put Jake to work on his special day...well, he wanted to see how it was to toss the pizza dough.
Old Enough to Vote 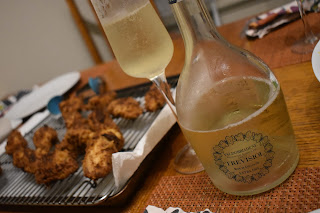 In early October, we received our mail-in ballots. It was the first time we were getting three ballots! So, to celebrate my elder son's first time voting (woohoo for embracing his civic responsibility!), we made Fried Chicken + Trevisiol Prosecco Superiore Valdobbiadene “Rive di Collalto” Extra Dry.
The Rive denomination means 'banks', in the local dialect, and refers to the steep hillsides in Prosecco DOCG area. These banks are almost vertical and require that almost all of the viticulture is done by hand!
Nonno is 72! 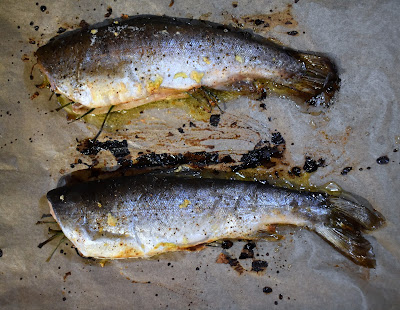 In late October, for my dad's 72nd birthday, we dropped off some oven-roasted trout that my father-in-law and D had caught and frozen. Nonno had requested fish and a pumpkin cake. 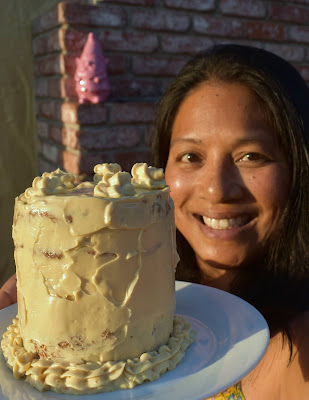 My preparation of the fish was similar to my Sesame & Citrus Oven-Roasted Trout, minus the lemons on top. And, for his pumpkin cake request, I assembled a mini pumpkin layer cake with browned butter buttercream. 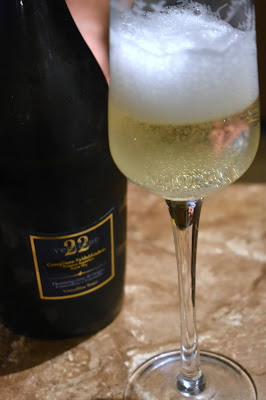 When we got home, Jake and I poured the 22 Ventidue Conegliano–Valdobbiadene Prosecco Superiore Extra Dry. This wine is made from 50-year-old Glera vines in a rediscovered vineyard Vinicollina di Tesini which is located in Cozzuolo.
In researching this wine, I came across a word that was new to me: viticoltore, 'viticulturist' or 'vine grower' in Italian. And Tesisi's viticoltore, Lino Segat, devotes hours every day to overseeing the development of this wine - from hand-pruning in January pruning through the vendemmia, Fall harvest. Segat reported, "Che ogni vite su di tutti i giorni  è osservata" Every vine on every day is observed....
He's Out! 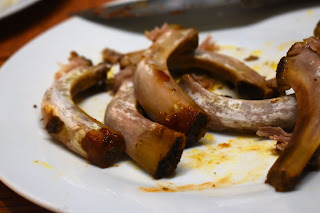 On election day, we watched as the Biden-Harris victory unfolded with Oven-Roasted Ribs and a bottle of Sommariva NV Brut, Conegliano Valdobbiadene Prosecco Superiore. I usually don't get too political on my kitchen blog, but let's suffice it to say, every voter in my household - and even the one who isn't old enough to vote - were pleased that he will be a one-term president. 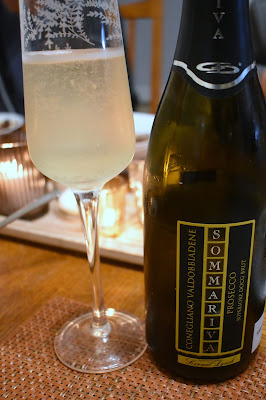 The Sommariva NV Brut Conegliano Valdobbiadene Prosecco Superiore is crisp and aromatic, offering layers of herbs and stone fruit with hints of toasted nuts. Its broad range of aromas carry over to the palate with brightness and vibrant acidity, making it incredibly versatile and food friendly.
Pre-Thanksgiving Feast 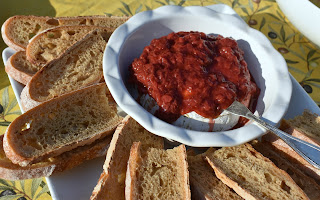 For Thanksgiving lunch, I took a break from the kitchen (I had been up since 4 in the morning prepping and cooking!) and served baked brie topped with a quick strawberry compote. In my flute was the Val d’Oca Prosecco Millesimato. 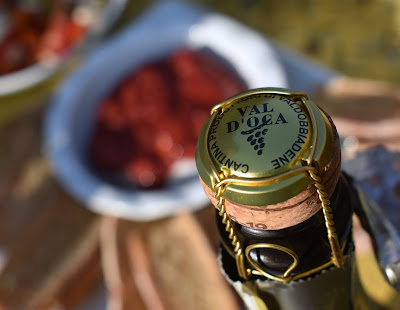 Val d’Oca, under the cooperative Cantina Produttori di Valdobbiadene, is one of the oldest producers of Prosecco. They make their Prosecco from Glera grapes that are cultivated in the hills of Valdobbiadene. I have always loved saying that word. It's so lyrical and rhythmic. 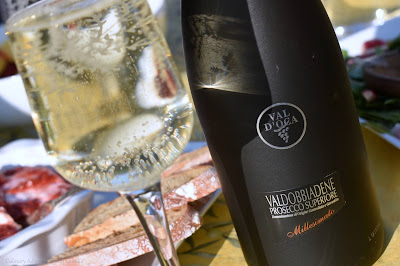 This bottle - Val d’Oca Prosecco Millesimato - is a vintage-dated sparkling wine made exclusively of Prosecco Superiore Valdobbiadene DOCG grapes. On the nose we got aromas of white flowers - think honeysuckle - along with crisp pears and apples.

On Thanksgiving I reflected on what this pandemic has afforded us: more time with the boys. If it weren't for the coronavirus, R would be off at his first year of college. And while this might sound selfish, I am grateful for more time with him. He says he's glad to get my food delivered to his room while he's distance learning as many of his classes are later in the day or evening. "It's much better than what I imagine dorm food will be!" So, it's a win-win. 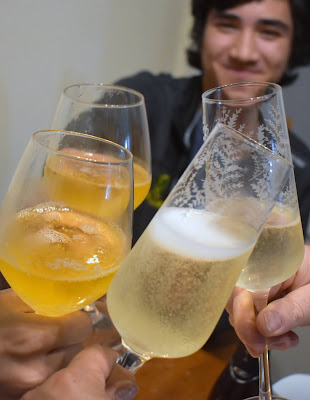 Our kids grow up and leave the nest far too quickly. I'm appreciative for any extra time I get with mine. Now that is something to celebrate. Cin cin!