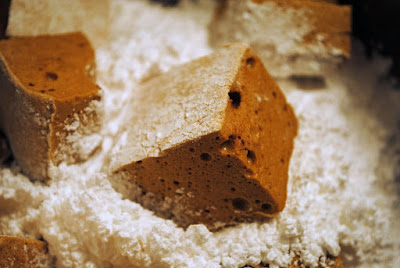 This month, for Food'N'Flix, Debra of Eliot's Eats is hosting. She asked us to watch The Holiday* and you can read her invitation here.
We have already started with our holiday preparations. At the end of such a tumultuous year - being sheltered-in-place since March, missing every single celebration with friends and family since then including birthdays, anniversaries, R's high school graduation, and more, you get the drift - we needed a little Christmas spirit in our lives.
The day after Thanksgiving, we drove up to the Santa Cruz mountains and cut down a tree. 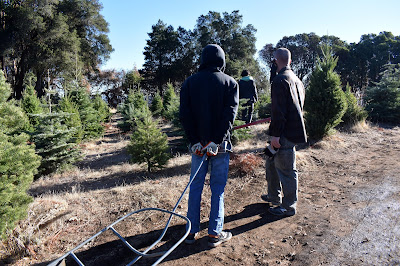 And I have had Christmas music streaming in the kitchen as I cook since then as well!
The Movie 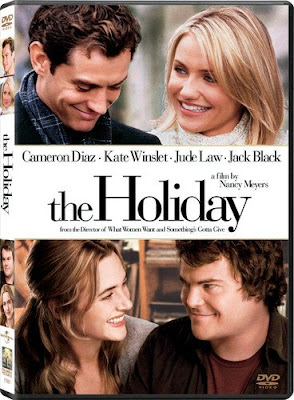 photo from amazon
So, when I saw Debra's pick, I was excited to settle in for a holiday rom-com...alone. Everyone in my household looked at the movie and decided to vacate the living room and do something else. Anything else. Fine.
Writer and director Nancy Meyers has also written It's Complicated (which we watched for our September 2012 Food'N'Flix) and Something's Gotta Give. If you've seen either of those, you know the basic premise: love is messy and complicated. And you know the basic story: The characters in her movies don't just fall in love, they talk about it, they agonize about losing it, they lose it, and - yes, indeed - they find it (again).

Let me set the stage. Two women are aching for a change of scenery during the holidays to forget their love-troubles. Iris Simpkins (played by Kate Winslet) lives in Rosehill Cottage in Surrey and has just been assigned to write about the upcoming nuptials of her former love and current colleague. Ouch. Amanda Woods (played by Cameron Diaz) lives in Los Angeles and has just thrown out her unfaithful boyfriend. The two women connect online and decide to swap houses for the holidays.

And now Meyers weaves a complicated web of events that are delightful to watch despite their predictability. As the women navigate landing in the other woman's life, they have, as Arthur explains it to Iris, a meet-cute.

"Say a man and a woman both need something to sleep in and both go to the same men's pajama department. The man says to the salesman, 'I just need bottoms,' and the woman says, 'I just need a top.' They look at each other and that's the 'meet cute'."

Meet cute, a serendipitous meeting that ends in love. For Iris, it's Miles (played by Jack Black); for Amanda, it's Iris' brother Graham (played by Jude Law). And you just have to love how Graham thaws Amanda's icy protective shell. She admits she hasn't cried since she was fifteen when he parents divorced; he, on the opposite end of the emotional spectrum, admits to crying all the time.

Graham: Well, I cry all the time.
Amanda: You do not.
Graham: Yeah I do. More than any woman you've ever met.
Amanda: You don't have to be this nice.
Graham: It happens to be the truth.
Amanda: Really?
Graham: A good book, a great film, a birthday card, I weep.
Amanda: Shut up.
Graham: I'm a major weeper.

Though all the characters were fun, I think Graham was my favorite. Iris' widowed brother is a book editor and father to two little girls. "I'm a full-time dad. I'm a working parent. I'm a mother and a father. I'm a guy who reads parenting books and cookbooks before I go to sleep. I spend my weekends buying tutus. I'm learning to sew. I'm Mr. Napkin Head!" And, during another conversation, he admits "I have a cow in the backyard and I sew. How's that for hard to relate to?'"

Okay, that's all I'm going to say about The Holiday. It was a predictable rom-com that is perfect for the holidays. In fact, I think I might just watch it one more time before my rental window closes...or maybe I'll just order the DVD so I can watch it every year. I'm sure my boys will groan when that shows up in the mail.

Surprisingly, there was quite a bit of food inspiration in the movie: a Hannukah feast with brisket and chocolate-covered macaroons; Christmas fettucine on both sides of the pond; spicy tuna rolls at a quintessentially Los Angeles sushi bar; and lots and lots of wine. But I found my inspiration in hot cocoa, which is actually mentioned more than once in the movie. I particularly liked the scene where Amanda drops in at Graham's house and he introduces her to his daughters, Sophie and Olivia. They all gather around the dining room table for mugs of hot chocolate.

Sophie: Daddy, she has more marshmallows than I do.
Graham: No she doesn't, you each have five.Graham [to Amanda as he hands her a mug]: You have five, too.
So I decided to whip up a batch of marshmallows with a little gingerbread flair. 'Tis the season for gingerbread, after all. I couldn't resist.
The Marshmallows 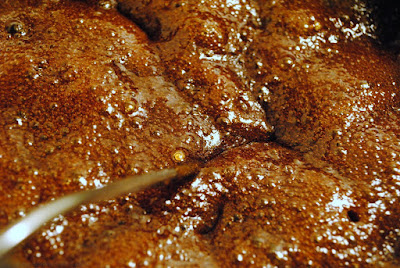 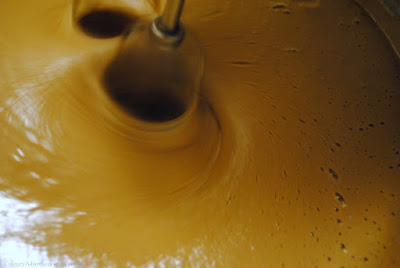 Prepare a 9" ×13" inch pan by oiling it with canola oil or butter. Dust powdered sugar over the oiled sides of the pan. Place 1/2 cup of water in a large mixing bowl. Sprinkle gelatin over water and allow to soften, 5 minutes. Add in the spices and 2 Tablespoons of the rum.

Place remaining water, sugar, molasses, rum, and syrup, and salt into a large saucepan. Melt all of the ingredients together, without stirring, and bring to a boil. Boil until the syrup reaches 240 F on a candy thermometer.
With the mixer on low speed, slowly pour hot syrup down the side of the bowl, being sure to avoid the whisk as it will splatter the syrup and could possibly burn you. Once all of the syrup is incorporated gradually increase mixer speed and whip on high until the mixture turns lighter and become very thick and stiff. Beat for another two minutes. Then, spread the marshmallow into the prepared pan and with wet hands, smooth the top.

Dust liberally with powdered sugar and allow to set at room temperature for at least 4 hours or overnight, if possible. Once they are set, cut them, roll them in more powdered sugar. 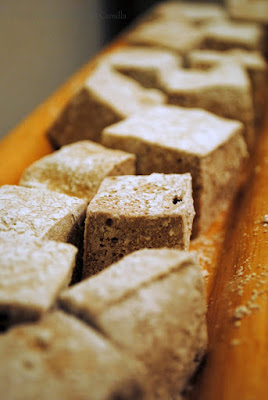 I made these large, so five definitely wouldn't fit in the top of a mug of hot chocolate. Maybe one or two though I suspect that my boys would find a way to squeeze three or four into their cocoa.
*This blog currently has a partnership with Amazon.com in their affiliate program, which gives me a small percentage of sales if you buy a product through a link on my blog. It doesn't cost you anything more. If you are uncomfortable with this, feel free to go directly to Amazon.com and search for the item of your choice.