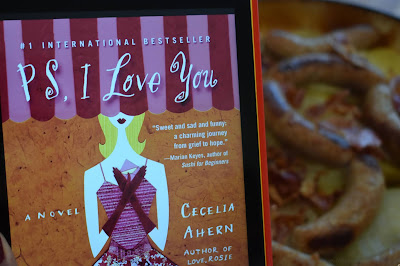 Okay, I'm early with this post. Really early. But I am a serial planner, a quick reader, and had a copious amount of free time during this holiday week.

P.S. I Love You by Cecilia Ahern* is going to be our book selection for our Lit Happens online book group in February 2021. Amy of Amy's Cooking Adventures is hosting; she is also picking the movie, based on the book, for our Food'N'Flix group. So much fun! While Lit Happens isn't a cook from the book kinda group, I always do find inspiration in what I read and watch. 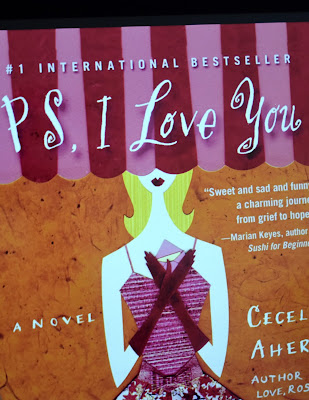 I have read this book before...years ago. And, at the time, I remember being wildly impressed that a young, single woman - it was her debut novel - could imbue her characters with such depth and understanding of not just married people but a recently widowed woman. The emotions seemed so vivid and genuine.
This time around, I was still captivated enough to read it in one evening. However, I did find Holly annoyingly self-centered. Here's the premise: a twenty-nine-year-old Irish woman loses her husband after his lengthy battle with brain cancer.

At the beginning of the book, Gerry is already dead. And in the two months since his death, his wife Holly is so paralyzed by grief that she doesn't leave the house; she doesn't go to work; and all of her friends and family are worried sick.

Then letters begin to arrive. Gerry has left a letter for Holly for each month left of the year. Every time, Holly opens a note, she is assigned a task. Some simple, some difficult but all are part of Gerry's plan to make Holly live again.

I enjoyed P. S. I Love You, the book, but I'm going to say something that I rarely say: I like the movie more. There are marked differences between the book and the movie that almost make it a completely different story! You'll hear more about that in February for our Food'N'Flix group. 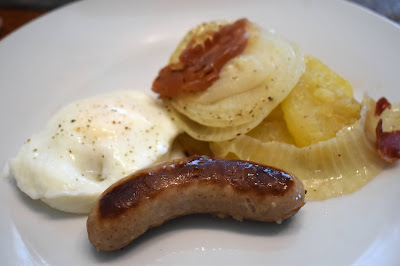 There were plenty of foods mentioned in the book which made this a delicious read. I considered making my version of Jammie Dodgers. "There’s a few biscuits there to go with your tea. Jammy Dodgers, your favorite" (pg. 18).

I thought about asking Jake to pull out the grill for dinner one evening...men and their fires, right?! "Her dad got so excited when they had barbecues; he took the whole thing so seriously and stood by the barbecue constantly while watching over his wonderful creations. Gerry had been like that too. What was it with men and barbecues? Probably it was the only thing that the two of them could actually cook, either that or they were closet pyromaniacs" (pg. 209).

I even talked to the boys about "homemade" Chinese takeout. I know that's an oxymoron. "Eventually at nine o’clock that night Holly succumbed to her stomach’s screaming demands for food. As usual there was nothing in the fridge, so she decided to treat herself to a Chinese takeaway. She sat snuggled up on the couch in her pajamas watching the very best of Saturday night TV while stuffing her face. After the trauma of being without Gerry for her birthday the previous day, Holly was surprised to notice that she felt very content with herself. It was the first time since Gerry had died that she was at ease with her own company" (pg. 61). 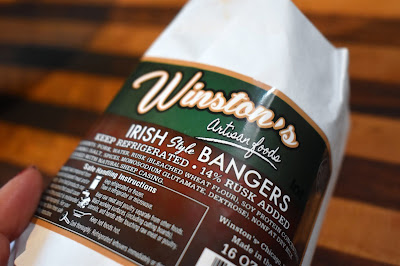 But, in the end, I was inspired by this package of Irish style Bangers I picked up at the market. I was just going to make bangers and mash or the Irish Breakfast that Holly eats at her neighborhood diner. Then I came across mention of a Dublin coddle - not in the book - and knew that my trio would love it. Who doesn't like potatoes, sausage, onions, and bacon!??

I thought about slathering the dish with gravy, like Holly's dad, but thought it would be too rich.

"'You want some vegetables with your gravy, Dad?' Declan asked, seriously offering him a bowl of broccoli. Everyone looked at Frank’s plate and laughed. Once again it was a sea of gravy. 'Ha-ha,' Frank said, taking the bowl from his son. 'Anyway we live too close to the sea to get any,' he added. 'To get what? Gravy?' Holly teased and they all laughed again" (pg. 452).
Ingredients serves 4
Procedure
Simmer the sausages in water until cooked then cook them in oil just enough to give them color. Set aside.
Place the potatoes in a large pot, covered with water. Bring to a boil and cook until you can pierce them with a fork. They don't need to be cooked completely because they will be braised later. Once they are cool enough to handle, slice into thick coins.
Preheat the oven to 300 degrees Fahrenheit. 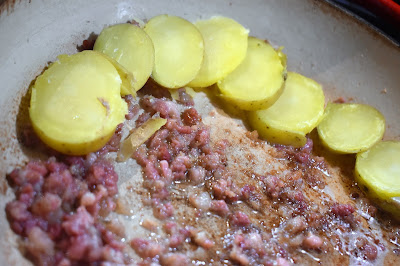 In a large heavy pot with a tight lid - I used my Le Creuset braiser - cook the ground or chopped bacon until the fat is rendered and the meat cooked through. Layer the potato coins around the pan on top of the bacon. 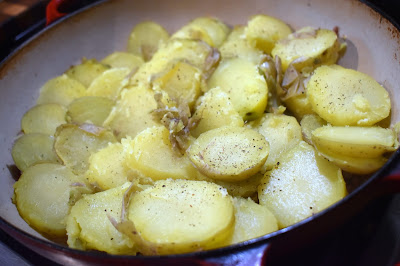 Season the potatoes with salt and pepper. 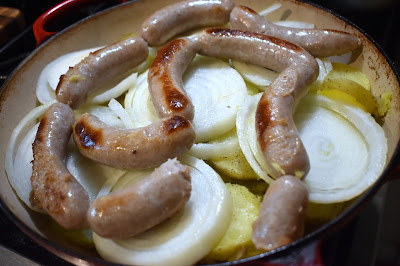 Place the onions on top of the potatoes, followed by the grilled sausages.

Pour the stock mixture over the top. On the stove, bring the liquid to a boil. Immediately turn the heat down and cover the pot. 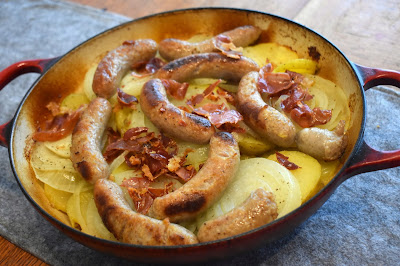 Put the covered pot in the oven and let everything braise for at 90 minutes. After an hour, check the pot to make sure that it hasn't dried out. Add more stock, if needed. Put it back in the oven until the potatoes are creamy and the onions are soft.

To serve, crumble the cooked bacon over the top and serve immediately. Traditionally you would serve this with a Guinness for supper. I was serving this as a hearty Irish breakfast, so I added poached eggs and some strong coffee. 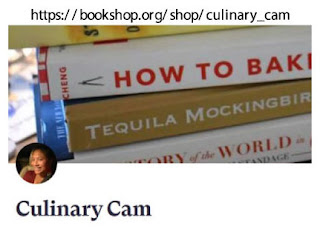 *I am part of the affiliate program on Bookshop.org, which gives me a small percentage of the sale if you buy a book through my link or my shop.  It doesn't cost you anything more, but I do appreciate the support. Here's this book: P.S. I Love You by Cecilia Ahern! If you are uncomfortable with this, feel free to go directly to Bookshop.org and search for the item of your choice.
Click to see what everyone else in Foodie Reads read in December 2020: here.