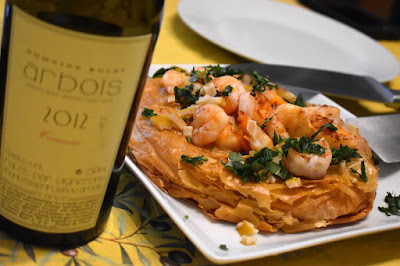 David of Cooking Chat is hosting the French Winophiles for their October event on the Jura. You can read his invitation here.
If you are reading this early enough, feel free to jump into our live Twitter chat on Saturday, October 17th at 8am Pacific time. Follow the hashtag #Winophiles and be sure to add that to your tweets so we can see it. In the meantime, these posts will go live by Saturday, October 17th...
To the Jura
Lying in Eastern France, approximately 50 miles east of Burgundy on the Swiss border, you'll find the Jura wine region. In a previous Jura event, I tasted Vin Jaune, Toétché, Wild Mushrooms, & Comté, but I was curious to track down a more traditional, e.g., not fortified, wine. I specifically wanted to find one of the common red wine varieties: Poulsard, or Ploussard; Trousseau; and Pinot Noir. And I did.
In the Glass 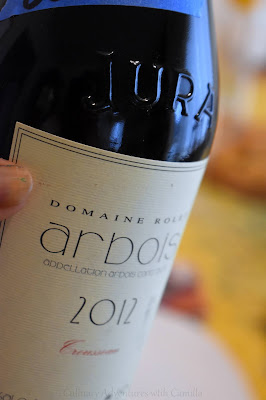 I actually located a bottle from the oldest AOC (Appellation d'Origine Contrôlée); Arbois was granted AOC status in 1936. I ordered a Domaine Rolet Arbois Trousseau 2012 from wine.com. It is not currently available, but had a suggested retail price of $23 when I bought it earlier in the year.
Désiré Rolet started making wine in the Jura in 1942 and his children took over nearly two decades later. The domaine is in the process of converting to organic practices, but no herbicides or pesticides are used.
A traditional light red wine comprised of a blend of  40% Poulsard, 30% Trousseau, and 30% Pinot Noir. The grapes come from the hills of Montigny and Arbois and were fermented separately before being blended 18 months later.

Poulsard is grown almost exclusively in eastern France where it has been cultivated since the 15th century. While it is actually a dark-skinned noir grape, Poulsard's skins are very thin with low amounts of color so the resulting wines are pale in color. Therefore it is often blended with other red-skin varieties. In this case, it's blended with Trousseau and Pinot Noir.

Indigenous to the Jura region, Trousseau is a deeply colored red wine grape that somehow made the pilgramage to Portugal where it has been established for two centuries as Bastardo. But it is also called Maturana Tinta, Merenzao, and Verdejo Negro. 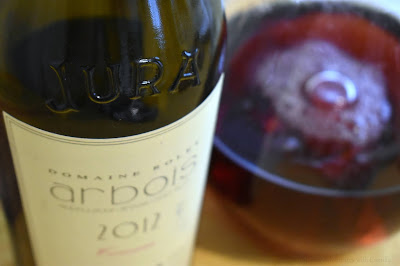 In the glass, this wine poured a clear garnet hue with some pewter flecks. On the nose, there was lots of red fruit with notes of cherry and strawberry. But it was the touch of spice both on the nose and on the tongue that intrigued me. Its delicate tannins and savory finish made it a nice match for a Moroccan seafood pie. 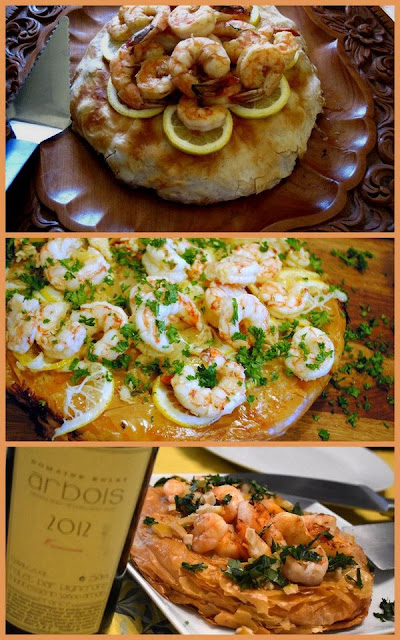 I actually served this pairing just before the shelter-in-place orders went into force way back in March. We celebrated one of my best friend's birthday the weekend before we were ordered to stay home. Phew...got that celebration in under the wire.
Since it was March 14th - or 3.14 - I hosted a Pi Day dinner for her. And this Seafood B'Stilla, or Seafood Pie, is the most requested dinner that I make. Seriously. I have made it for several birthday parties over the years - just look at the collage above. Its only rival, as far as requests go, is my lasagna!
Ingredients makes two 9" pies
Procedure
Preheat oven to 400 degrees Fahrenheit.
In a large, flat-bottom pan, melt 2 Tablespoons butter with a splash of olive oil. Cook the onion and fennel until the onions are transparent and the fennel softened. Add in the seafood - minus the shrimp for garnishing - and season with lemon juice, zest, paprika, cumin, salt, and pepper. When seafood is almost cooked, fold in the fresh herbs.

Layer six sheets of phyllo dough is a baking dish, brushing each with melted butter before laying the next one on top. Fill the dish with the seafood mixture, drained of its sauce.  Fold the overhanging pastry towards the middle and cover with two more layers of phyllo, brushing with butter again. Overturn the pie onto a flat baking dish. Brush with melted butter.
Bake at 400 degrees Fahrenheit till the phyllo dough is browned and crisp, approximately 35 minutes.

To serve, plate the b'stilla. Pile shrimp on top and sprinkle with more fresh herbs.
Well, that's a wrap for this month's #Winophiles exploration of the Jura. We'll be back next month with a focus on Sweet Bordeaux with Linda at My Full Wine Glass leading the discussion. Stay tuned.