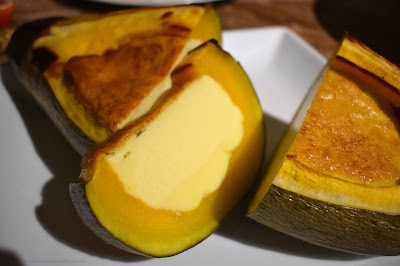 Sankaya, Thai pumpkin custard, is probably one of my favorite desserts; but it's an especially great dessert for Fall when a silky coconut milk-based custard is steamed directly inside a pumpkin. When it uses a kabocha or Japanese pumpkin the dish is called Sankaya Faktong. But since I don't know the name of this pumpkin in English or in Thai, I'm just going to call this Sankaya. 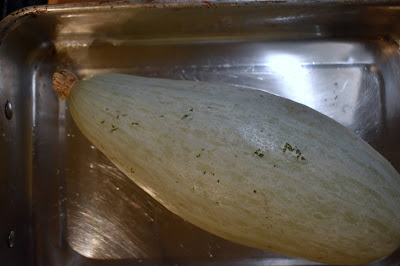 I picked up this beauty at the Serendipity Farms farmstand which is only open on Fridays though I'm sure you could pick one up at Elroy's Fine Food since she does the produce for them, too. As I said, I had no idea what it was called. It's the shape of a pink banana squash that I've gotten from Farmer Jamie before - when I made Mapled Pink Banana Pumpkin Pie. But I just heard back from her that it's a Blue Guatemalan squash. It's delicious, by the way, and perfect for this dramatic dessert. 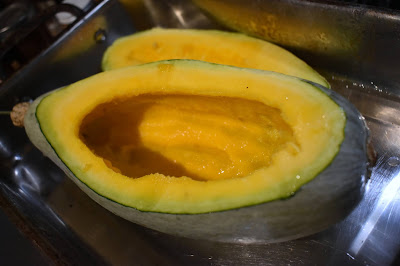 *If you have additional filling left over (and I usually do), pour it into a ramekin. It won't have the pumpkin flavor, but it's delicious on its own, too.
Procedure 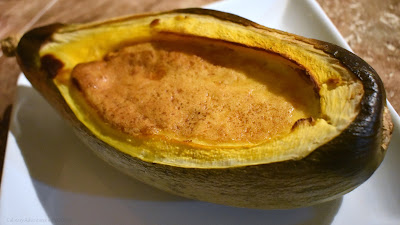 Preheat oven to 375 degrees Fahrenheit. Place your squash on the counter and figure out on which side it can lie flat without rolling. Slice a small portion off the other side and scoop out all of the pumpkin inards. Rinse it out, pat it dry, and place it in your baking dish.

In a mixing bowl, beat together the eggs, coconut milk, sugar, vanilla and salt. the mixture should be a uniform color.

Pour the egg mixture into your hollowed out pumpkin and place the dish in the oven. Carefully pour water into the dish until the pan is about an inch full of water. You can do this before you put it in the oven if you're careful. I always end up splashing and spilling as I'm transferring to the oven, so I do it in place.

Bake until the custard is firm to the touch and nicely browned on the top. The pumpkin will still hold its shape, but the flesh will indent when you press on it. For this,it took about 2 hours and 15 minutes. For smaller kabocha squash, it's usually about 90 minutes.

Once it's done, allow to cool a bit before touching. 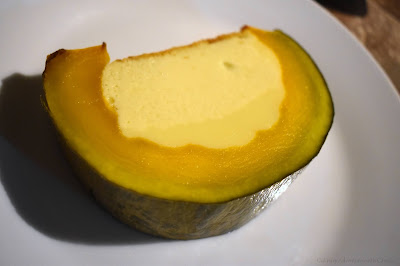 Slice into individual pieces, about an 1-1/2" wide, and enjoy! 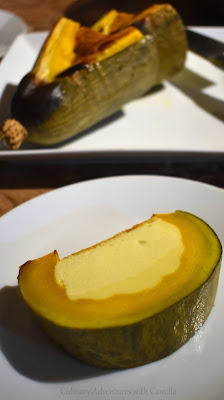