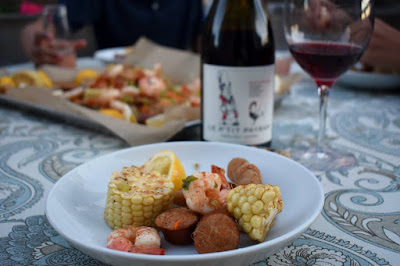 During Fall Break, earlier this month, I did a lot of reading. Well, I read a lot all year long. But Fall Break afforded me full days of lounging and reading...between hikes and family dinners. One of the books I devoured was The Haunting of Brynn Wilder by Wendy Webb.*
On the Page 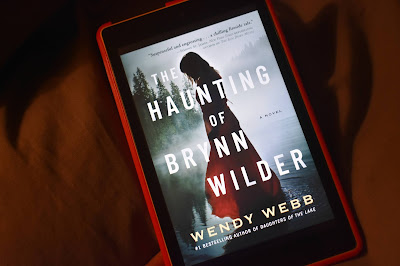 At first I didn't really know what was meant by the gothic literature; then I realized that Edgar Allen Poe's books and stories practically invented the genre. Okay. I'm with it now. Though that still isn't really a genre that I read regularly.
Brynn Wilder arrives in the tourist town of Wharton, on Lake Superior, to regroup and refresh after a year of taking care of her dying mother, the split from her longtime boyfriend, and being on sabbatical from teaching; she isn't sure that she wants to return to her old life at all. Her friend arranges her stay at a guesthouse with a motley cast of characters who are also in town for the season - Jason and Gil, a gay couple who have Alice, Jason's ex-wife who is declining from Alzheimer's and still believes she is married to Jason, staying with them; LuAnn, the guesthouse proprietress; Dominic, a heavily tattooed, mysterious man who has been the last person to be seen with two different people just before their deaths.
From the moment she arrives, Brynn has vivid, bizarre dreams of ghosts and hauntings within the guesthouse. And Alice seems to have odd insight into these dreams, commenting to Brynn as is she was also there. Still this is more love story - between Brynn and Dominic - than ghost story. It was a nice way to spend an afternoon. And it inspired me into the kitchen for both nachos and a tuna melt!
Not surprisingly, there are quite a few passages about food as the characters get to know each other during the daily happy hours or during shared meals. "He leaned over the counter. 'Everything on the menu is good here, because I make it myself when those kids who call themselves my cooks aren’t around. But for the special tonight, I’ve been roasting a pork shoulder all day with Mexican spices, and it smells like heaven. It would make a mean burrito if you’re wanting one.' 'Ooh, that’s tempting.' 'LuAnn herself likes a concoction she calls a taco salad burrito,' he went on. 'It’s basically a taco salad, with the pork, lettuce dressed with chipotle ranch, tomatoes, and onions, along with refried beans and melted cheese, wrapped in a tortilla. Sour cream, guac, and salsa on the side.' That was all I needed to hear. 'Yes, please,' I said, not remembering the last time I had eaten anything that decadent."

"After we finished our first beer, he popped out back to get us some tacos with all the fixings and a decadent plate of nachos with guacamole and salsa. “If I could eat only one thing for the rest of my life, it would be nachos,” I said, peeling a cheese-laden chip off the mound."

"'This is for you,' Jason said, pointing to a big plate of hors d’oeuvres—cheeses, meats, veggies, dips, crackers—on the kitchen counter. Two bottles of wine sat in an ice bucket, with three glasses nearby. I hadn’t noticed it when we came in. 'Jason, you didn’t have to do this,' I said. 'Of course, silly,' he said. 'If you feel you want some lunch downstairs, just put it on my tab. Alice likes the tuna melt.' 'Oh!' Alice piped up. 'It’s wonderful. They put avocado on it.'"

" I saw our 'linner' was already on the table, served family style. Two chickens, roasted with rosemary and lemon; pasta with fresh basil, tomatoes, lemon, parmesan cheese, and pine nuts; a mixed-greens salad; a basket of hot bread."
In the Bowl 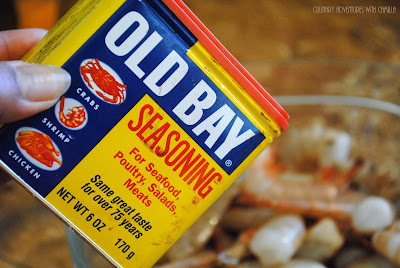 But what inspired me into the kitchen was the guesthouse's weekly fish boil. Brynn was helping with the prep. "As we sliced the potatoes and Gary worked with the fish, he told us the history of the fish boil. 'It started back when this place was new,' he began. 'We’ve got a little rivalry going with Door County on Lake Michigan over which area actually did it first. We did, obviously.' He snorted and went on. 'It started as an easy, fast, and cheap way to feed a crowd of people, like the loggers and fishermen who worked these shores. Now people think of it as a regional delicacy, which is sort of funny. It’s turned into something of an event at resorts in this area of the lake and in Michigan, too.' 'What kind of fish are we talking about here?' Dominic asked as he sliced. 'It’s whitefish—Lake Superior whitefish caught today and delivered half an hour ago. We boil ’em up with potatoes and corn on the cob in a pot. We serve it all with coleslaw and bread. And voilà, fish boil! We do it here every Friday during the high season. The timing of the boiling really is an art, which I have perfected, if I may say so myself.'"
It reminded me of when I went to a local restaurant with some gals that I know from the food world. We shared a ridiculous amount of food, but it was the seafood boil with a local-to-me red wine that stuck with me. The match was divine; so I thought I'd share this super simple, relatively speedy dinner: the good ol' shrimp boil. Yes, I know it's not the guesthouse fish boil, but it's a favorite!
Ingredients serves 4 with leftovers 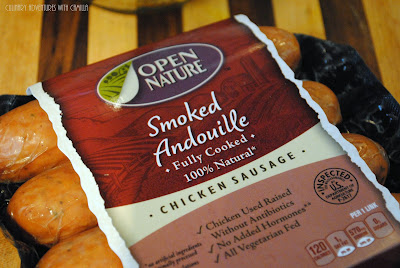 Procedure
In a small bowl, mix together 2 Tablespoons Old Bay, garlic paste, olive oil, and red chili paste. Mix in the shrimp until they are well-coated. Set aside for at least 10 minutes. 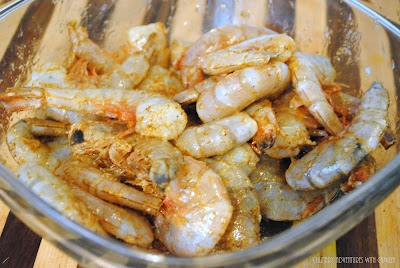 Place large pot on stove. Melt butter and add in the diced carrots, celery, and onions. Cook for 3 to 5 minutes, then stir in the potatoes and 2 Tablespoons Old Bay. Pour in enough water to cover the potatoes by at least 2" of water. 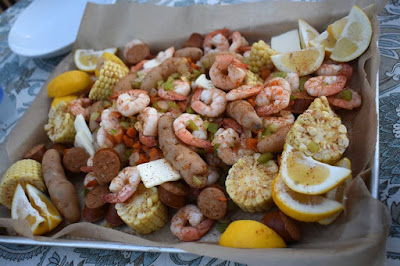 Wrangle the food out of the broth onto a newsprint-lined table or a baking tray.

Once the food is out on the table, squeeze lemon juice over the top. Sprinkle with more Old Bay. Serve immediately with lemon wedges and melted butter...and lots of napkins. 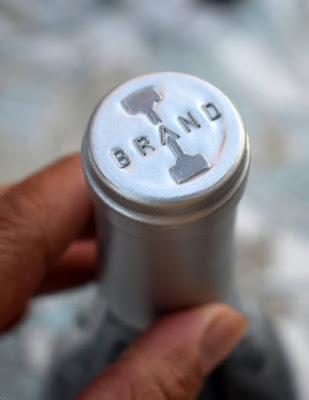 And if you're curious about the red wine pairing with the seafood, I squirreled away a bottle of the 2015 Le P'tit Pape from I. Brand & Family Winery a couple of years ago. I decided now was the perfect time to uncork it. It's a Rhône-style red wine blend comprised of 62% Grenache, 19% Syrah, 14% Mourvédre, 3% Counoise, and 2% Cinsault. 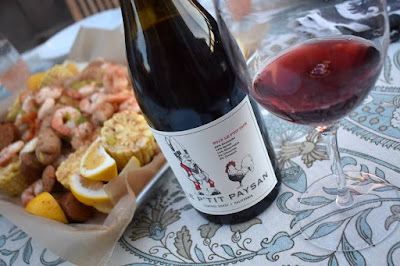 If you're thinking that red wine doesn't go with seafood. Nonsense! Get yourself a bottle of this wine and prepare to dazzle your tastebuds.
*This blog currently has a partnership with Amazon.com in their affiliate program, which gives me a small percentage of sales if you buy a product through a link on my blog. It doesn't cost you anything more. If you are uncomfortable with this, feel free to go directly to Amazon.com and search for the item of your choice.

Click to see what everyone else read in October 2020: here.