Fun with Veggies and Thoughts on Real Bento 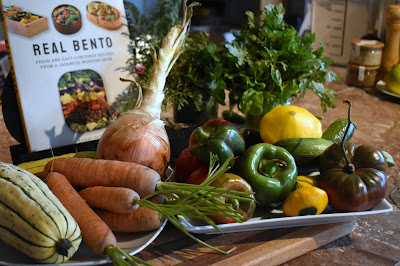 I received a copy of Real Bento: Fresh and Easy Lunchbox Recipes from a Japanese Working Mom by Kanae Inoue* when I won a giveaway from Tara's Multicultural Table. Tara and I have been in similar food blogging circles for years and exchange messages every now and then about travel (she and her kids went to Denmark not long after our trip), language, and - of course - food. So, when I saw that she was hosting a giveaway for this book, I entered. I was thrilled that I won...and even more thrilled when it arrived. 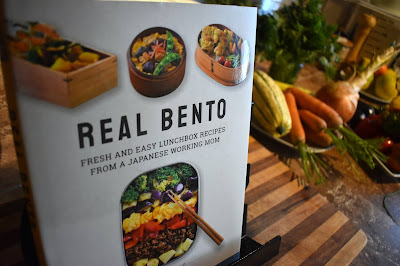 I immediately started perusing the recipes and really loved the idea of creating veggie side dishes that I could place over rice for lunches during the week. Since Jake is plant-based during the week, we've been eating tons more vegetables; it's nice to mix it up and not just have green salads every single day of the week.
Plus I had just picked up our CSA box from Robina's Organics and have vegetables still coming out of our garden as well. I picked recipes from the book that aligned with what was in my veggie bin and tried Inoue's recipes for pumpkin (I used delicata squash), cucumber, carrots, eggplant, and bell peppers.
I loved that her recipes are organized by categories such as 'tasty and salty-sweet' and 'seasoned with curry.' That made making multiple dishes with a single seasoning, such as miso, easy as they were all on one double-page spread. For example, I just opened to that page and made both the Carrot with Miso Sauce and Pumpkin with Miso Butter.
The downside about this cookbook - for me, anyway - was that she uses the microwave to quickly cook her vegetables and her recipes are portioned for a single serving. First, I don't own a microwave, so I had to adapt the recipes to used blanched or steamed vegetables; second, I am always cooking for a minimum of four servings, sometimes  more if I want to have leftovers. And lastly, I found her recipes a little too salty for my tastebuds. So, I adapted by lowering the amounts of miso or soy in the recipes.
Here's what I tried, with adaptations noted.
Spicy Eggplant serves 4
Inoue doesn't indicate any kind of cooking for this recipe,
but I couldn't imagine eating raw eggplant, so I blanched mine before proceeding. 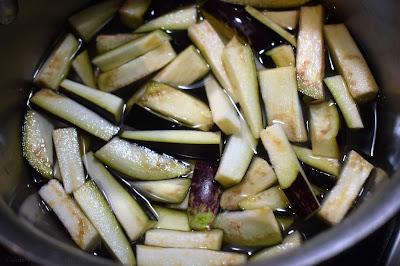 Ingredients
Procedure
Cut eggplant into batons and sprinkle with salt. Let stand for fifteen minutes before placing the eggplant in a pot. Cover with water and bring water to a boil. As soon as it boils, turn off the heat and let the eggplant stand for 5 minutes.
In a small mixing bowl, whisk together the soy sauce and mustard. Drain the eggplant and add it to the soy-mustard mixture. Toss to coat. Let cool completely before refrigerating.
Spicy Buttered Pumpkin serves 4
I used a delicata squash for this instead of a kabocha squash. I substituted vegan butter for regular butter
so my husband could eat this during the week. And I reduced the amount of sugar and soy sauce. 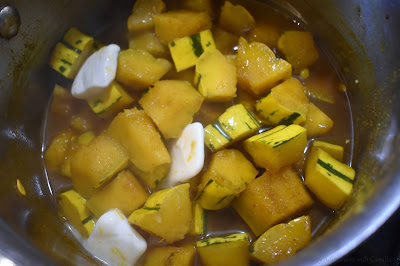 Ingredients
Procedure
Place squash in a pot. Add in the sugar, curry powder, water, and soy sauce. Bring to a boil over medium heat, then reduce heat and simmer until the skin side of the squash is easily pierced with a fork. Add in the butter and stir until butter is melted. Toss to coat. Let cool completely before refrigerating.
Ginger Cucumber serves 4
I didn't have mentsuyu sauce, so I substituted sake, mirin, and soy sauce. 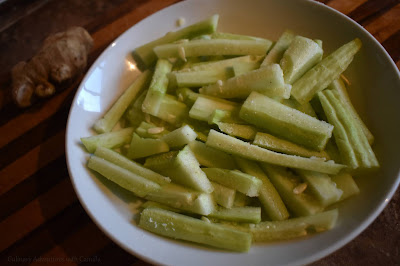 Ingredients
Procedure
Place cucumber in a bowl and toss with salt. Let stand until they are limp, approximately 10 to 15 minutes. Squeeze out the excess liquid and place them in a lidded bowl. Pour in the sake, mirin, and soy sauce, and sesame oil. Toss with ginger until fully-coated. Let marinate for a day or two before eating.
Celery with Sesame serves 4
I skipped the crazy salt, mainly because I have no idea what that is!
And by 'ground sesame seeds' I was guessing she meant tahini. Maybe not, but it's what I used. 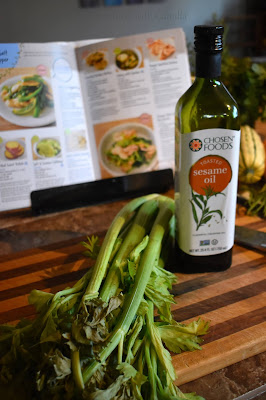 Ingredients
Procedure
Place chopped celery in a pot. Cover with water and bring water to a boil. As soon as it boil, turn off the heat and let the celery stand for 5 minutes.
Drain and then toss celery with sesame oil, tahini, and sesame seeds. Toss to coat. Let cool completely before refrigerating.
Carrots with Miso Sauce serves 4
I reduced the miso to make it less salty. 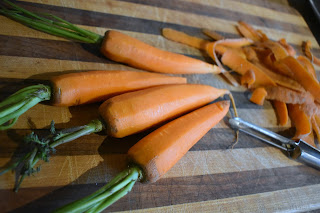 Ingredients
Procedure
Place carrots in a pot. Cover with water and bring water to a boil. As soon as it boils, turn off the heat and let the carrots stand for 5 minutes.
Drain and then toss carrots with vinegar and miso. Toss to coat. Let cool completely before refrigerating. 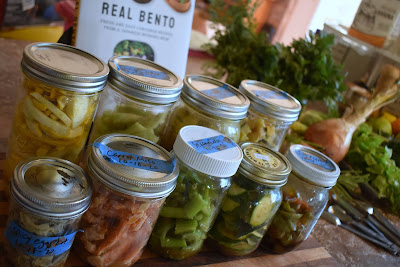 Overall, I enjoyed reading this cookbook and being inspired by flavor combinations. But, as written, Inoue's recipe were not all that useful for me. Still I will keep this cookbook readily available for when I want to try something new or need some inspiration. Besides, I am all for anything that gets people to eat more veggies!
And I am looking forward to trying some of her meat and egg recipes for Jake's 'animal days.' He does eat meat, seafood, poultry, and dairy three meals a week. Stay tuned...
*This blog currently has a partnership with Amazon.com in their affiliate program, which gives me a small percentage of sales if you buy a product through a link on my blog. It doesn't cost you anything more. If you are uncomfortable with this, feel free to go directly to Amazon.com and search for the item of your choice.


Click to see what everyone else read in October 2020: here.