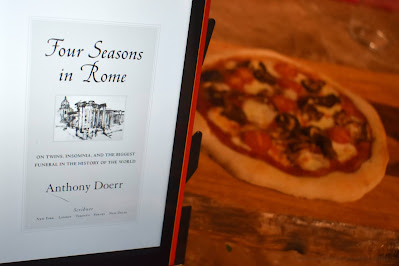 I picked Four Seasons in Rome: On Twins, Insomnia, and the Biggest Funeral in the History of the World by Anthony Doerr* for my online Lit Happens group. I honestly don't remember how this came across my desk, but I never turn down a chance to read a book about Italy, especially one about Rome. And I'm glad that others were as keen to read it as I was. My husband has a book group that, I swear, they all grouse about the picks. Though, I'll be honest, I listened to half of his book this month when we were driving to visit my in-laws and it was definitely grouse-worthy. Even the boys were elated that they didn't have to hear any more of that depressing book. In any case...let's get back to the purpose of this post! 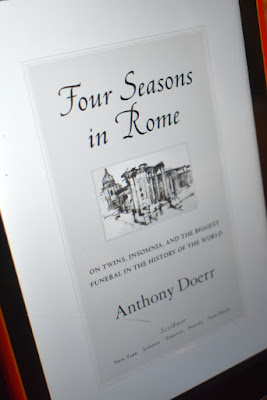 This is Doerr's memoir of his year - four seasons - in Rome where he was installed as a writing fellow. He had received the fellowship just after his wife delivered twin boys. So, he and Shauna headed out from Boise to Rome with two infants in tow. And they celebrated the boys' first birthdays just before they left to repatriate in Idaho.

This isn't a particularly deep story or a memoir with a pointed focus or great epiphany, but it succeeds because Doerr is a fantastic writer.

"The easier an experience, or the more entrenched, or the more familiar, the fainter our sensation of it becomes. This is true of chocolate and marriages and hometowns and narrative structures. Complexities wane, miracles become unremarkable, and if we’re not careful, pretty soon we’re gazing out at our lives as if through a burlap sack" (pg. 54).

I loved his sense of wonder, his self-deprecating manner regarding his language skills, and his keen observations about life in Rome.

"At the produce stand—we learn the hard way—you’re not supposed to touch the vegetables; you point at the insalatine or pomodori and the merchant will set them on the scale. The butcher’s eggs sit in open cartons, roasting in the sun. There are no tags on any of his meat; I gesture at something pink and boneless and cross my fingers" (pg. 10).

"'Sugo di pompelmo,' I say. 'Con basilico.' She squints at me. She knows me, I think; several times she has offered Henry and Owen lollipops. 'Sugo di pompelmo,' I say. I point. Her fingers float past the jars on the shelves. 'Sugo di carne?' There are two dozen jars of tomato sauce right in front of her eyes. I speak more loudly. 'No, no. Sugo di pompelmo.' I am determined not to fail. She holds up a can of pears. I shake her off. She holds up jar of tomatoes with mushrooms. 'Questo? Pomodori? Con funghi?' 'Ecco! I say. 'Sù.' With mushrooms. Good enough. She hands me the jar. I pay. It’s not until I’m back on via Carini, halfway home, that I realize I was hollering for grapefruit sauce. Grapefruit sauce with basil" (pg. 59).

Well, it wasn't just his observations about Rome; I admired his candor about being a new parent.

"Shauna and I have meandering, sleep-starved debates: Why won’t Owen sleep? Gas? Jet lag? Italy? Having a baby is like bringing a noisy, inarticulate foreigner into your house and trying to guess what he likes to eat" (pg. 19).

And I appreciated the craft of his prose as much as his subject. Though I am anxious to see how this book translates to people who aren't as familiar with Rome as I am. Like Doerr, I spent four seasons in Rome...just after I graduated from college. So, it has a special place in my heart and a haunting familiarity.

"Amphorae, when they’re found whole, have thin necks, pointed bottoms, two handles. Empty, an unbroken transport amphora weighs sixty-six pounds. In the days of the Empire they’d be filled with wax or honey or linseed or grain, or—more often than not—olive oil. Then they’d be stacked in ships, floated to Rome from Spain or North Africa, dragged up the Tiber, and unloaded right below Mt. Testaccio, before the rapids around Tiber Island. The oil would be decanted into smaller jugs, and the amphorae would be cracked and stuffed with their own pieces and sprinkled with lime and stacked. All regulated, all planned, all recorded in Latin. Olive oil was the muscle, hair tonic, soap, and lamp fuel of the Empire, the flavor of its meals, the illumination of its dramas. Pliny devotes eight scrupulous chapters of the Natural History to olives and the olive tree, from seeding to picking to pressing to storing. Olive oil was rubbed on icons, bridles, kings, pregnant women, and foot sores. Want to preserve a piece of wood? Moisturize your face? Soothe a toothache, alleviate stretch marks, grease a chariot axle, cool your scalp, anoint a dead Christian?" (pg. 104)

I would pick up other books by Doerr simply because he writes well. And though I was unfamiliar with this idiom, I agree wholeheartedly. "Roma, they say, non basta una vita. One life is not enough" (pg. 201). 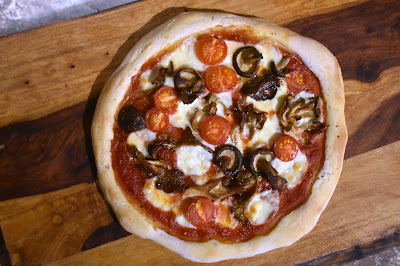 Given that this takes place in Rome, there is a lot of food mentioned.

From the stores..."In a pasta shop—a glass counter, piles of tortellini, yards of fettuccine—I manage to buy a kilogram of orange ravioli stuffed with pumpkin and ricotta, the pasta dusty with flour. 'I suoi bambini,' the shopkeeper tells me, watching my eyes to see if I’m following. 'Sono belli.' Your babies, they are beautiful" (pg. 18).

And what they cook..."We cook hamburgers made from veal. We make a disastrously good tomato soup and shave half a pound of Parmigiano into it. We drink $4 bottles of Chianti. We buy lemon-flavored yogurt in little bell-shaped jars sold at a dairy down the street and feed our boys shining white spoonfuls" (pg. 43). Oh, how I miss those inexpensive bottles of Chianti!
To the markets..."The three of them educate me in winter produce: one type of cauliflower white as cotton, another purple as dusk; sheaves of young leeks with mud still packed in their roots; basins of squash; tiny, spherical potatoes like miniature moons. Frost, they say, adds flavor to the leaves of kale; winter radicchio should be brushed with oil and grilled on warm coals. There is fennel in bright, reedy piles. Crinkly, soft cabbages. Mountains of radishes" (pg. 51).
But what inspired me into the kitchen was his description of mushroom pizza. "We share a piece of pizza con funghi so full of flavor it forces our eyes closed: the oil in the crust tastes like sun and wind; then there is the salty cheese, and the deep-woods taste of oyster mushrooms" (pg. 32).
Ingredients
makes six 8" pizzas (easily halved, but we love our pizza and having leftovers) 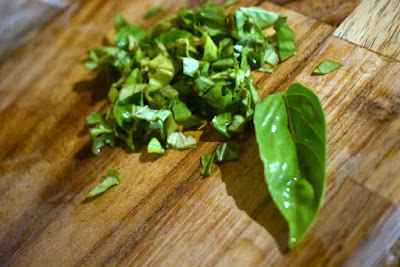 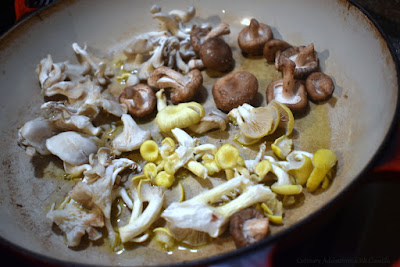 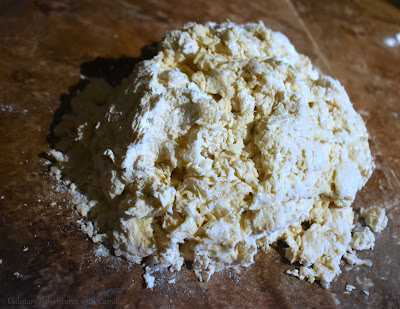 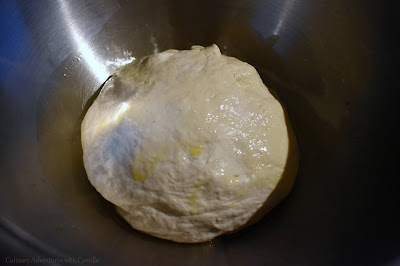 Place the dough in a greased bowl, cover with a kitchen towel, and let rise for as long as you can - or at least until it's doubled in size. I usually do my dough before I go to work and leave it till dinner time, so about 8 or 9 hours.
When you're ready to cook, preheat your oven to 450 degrees Fahrenheit. Cut your dough into six pieces. Handstretch the dough into a round shape and place it on a baking stone. Or, if you have someone more adventurous, you can toss them. Here's how that conversation went last night...
J: Are you going to throw the dough in the air?
C: What?
J: Are you going to throw the dough?
C: How many years have I been making pizza for us? Have I ever thrown the pizza dough?
J: Let me try!
C: Okay. 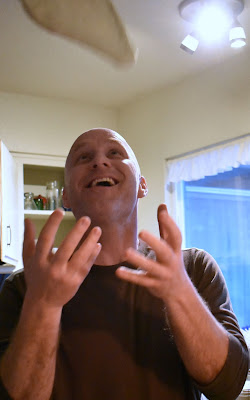 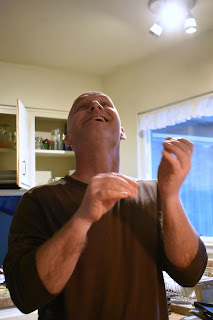 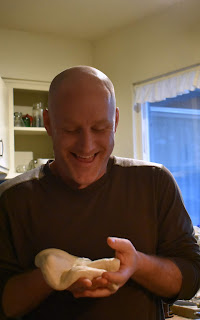 Spoon sauce onto the crust and spread it almost to the edges. Add your tomatoes and fresh mozzarella. 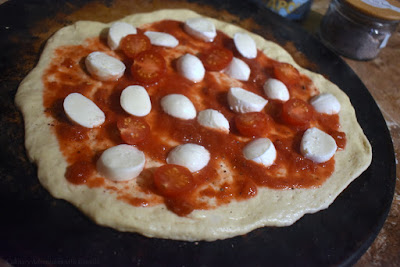 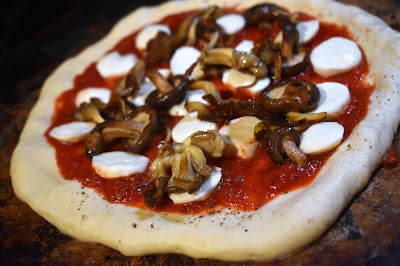 Place pizza in the oven for 16 to 18 minutes. You want the crust crisped and browned and the cheese gooey and melted. 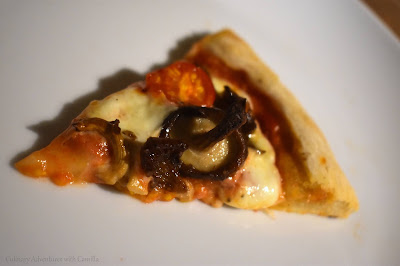 Top with fresh basil and serve hot.
*This blog currently has a partnership with Amazon.com in their affiliate program, which gives me a small percentage of sales if you buy a product through a link on my blog. It doesn't cost you anything more. If you are uncomfortable with this, feel free to go directly to Amazon.com and search for the item of your choice.


Click to see what everyone else read in October 2020: here.