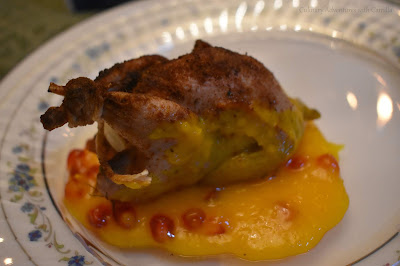 Let's get this out of the way: No Reservations* is not the month's selection for Food'N'Flix. We were assigned What's Cooking? And I already posted my Moroccan Rose Harissa for that. However, as I was perusing our 'previously watched' titles for inspiration on holiday movies, I came across No Reservations from way before I ever joined the group...and before I was even blogging.

I am still not sure how this movie evaded my attention for so long...it was released in 2007. But this week, as I prepared for our Thanksgiving feast and was waiting for squashes to roasts and crusts to chill, I started streaming it on Netflix. Then, Jake walked in halfway through and asked me to restart it. Done. I did discover that it's a remake of a German film called Mostly Martha. I will have to track that one down soon. 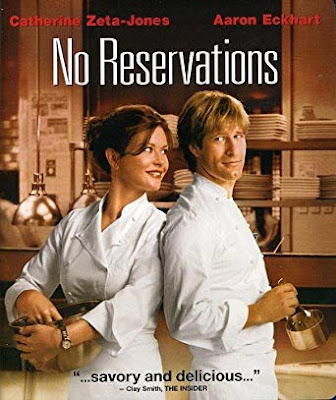 "...and they cooked happily ever after." Okay. It doesn't actually end like that, but as you see the two chefs in the kitchen of their joint venture, at the end of the movie, that line very well could have been the voice-over. And it's not really a spoiler when you recognize that this is a rather formulaic rom-com. In romantic comedies, the protagonists always end up together, right? Still this is an enjoyable diversion for a busy week or anytime you want to relax for a couple of hours and drool over some beautiful food.

This is the story of Kate (played by Catherine Zeta-Jones), a gifted yet unyielding chef, and Nick (played by Aaron Eckhart), who is perhaps equally gifted but has a much more relaxed demeanor in the kitchen. He blasts opera and direct his crew as a conductor; she insists that music distracts them from their jobs. You see the tension, right?

Then there's the subplot: Kate finds herself the guardian for her recently orphaned niece Zoe (played by Abigail Breslin). She is frustrated by the child who won't eat anything that she cooks. But Zoe eagerly devours a bowl of pasta that Nick makes for her after she helps him pluck and tear basil.

Zoe plays matchmaker between the two and, after a breakup, a reconciliation, and a few other hiccups, they end up running the Kate-Nick-Zoe Bistro or the Nick-Zoe-Kate Bistro. Their sign rotates! And, as I wrote at the start - and they cooked happily ever after. 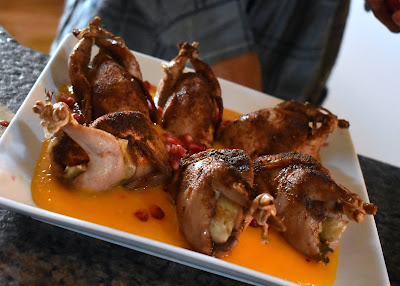 You can read the recipe round-up from the 2011 event when Kahakai Kitchen hosted #FoodNFlix: here. But I was inspired by the review that Kate gets: "Ms. Armstrong introduces bits of truffle in an endive salad that accompanied a lightly steamed and wondrously silken halibut fillet. It was highlighted by the gorgeous aria of her saffron-infused emulsion." 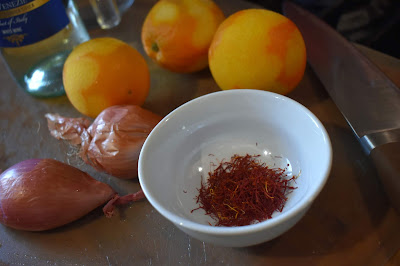 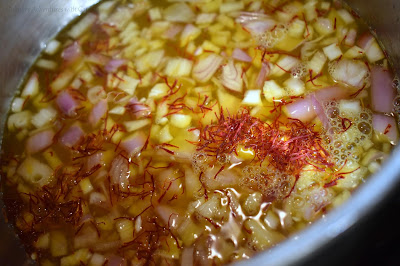 Place white wine, orange juice, saffron, maple syrup, and shallots to a boil in a small pot. Simmer for until the shallots are softened and translucent, approximately 6 to 8 minutes. Remove the pot from the heat and let cool before pureeing the sauce in a blender or food processor.

In a sauce pan, melt the butter with a splash of olive oil. Whisk in the flour and let the roux cook for 1 to 2 minutes. Pour in the saffron mixture and whisk until incorporated and beginning to thicken.

Add salt to taste and keep warm, but do not let it boil. I served the sauce with the roasted quail I made for Thanksgiving.