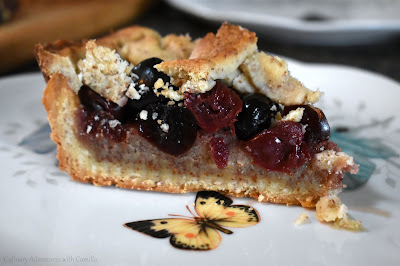 For this year's Ab Ovo Usque Ad Mala Thanksgiving menu, I knew that I wanted to end our feast with the Crostata di Ciliegie that was included in The Chef's Secret - A Companion Cookbook by Crystal King. But that recipe was inspired by The Chef's Secret*... 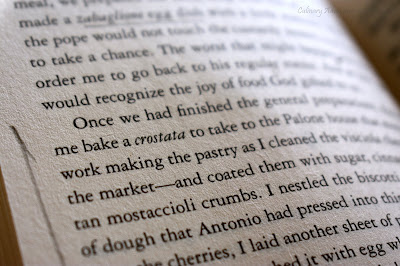 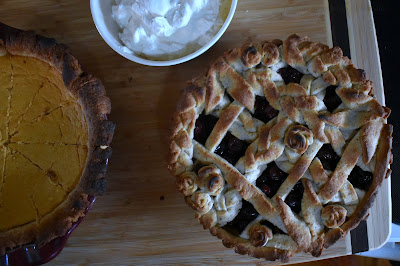 After I read that passage, I was daydreaming about cherry crostata, and I created a version with frangipane and Amarena cherries. The Amarena cherries, a variety of the Prunus cerasus developed by Gennaro Fabbri who was born in Bologna in the late 19th century, small, dark cherries grown near Bologna and Modena. Though Giovanni’s version is made with the Visciola—an indigenous, wild cherry—Amarenas were what I could find here in California! Because the cherries were bottled in syrup, I used very little sugar in the crust and added lemon juice to the frangipane to cut the sweetness. A rosewater, I’ve found, is a very polarizing ingredient; some people love it, others abhor it. So, I skipped it completely for this version. 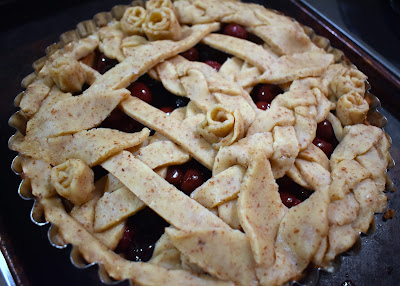 Also I tried to have some fun with the crust though it didn't turn out exactly as I had planned!


Frangipane
• 1 C ground almonds
• 1/4 C dark brown sugar
• 1/2 C melted butter
• 2 large eggs
• 2 t freshly squeezed lemon juice (I used Meyer lemons because my parents have a tree in their yard. Use whatever lemons you have.)


To Finish
• Amarena cherries (I used two 7.4 oz jars from Trader Joe’s which are pitted but still have stems.)
• Unsweetened whipped cream, for serving, optional 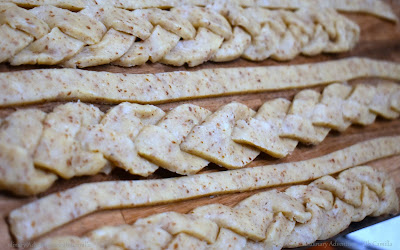 Alternatively stir in water and vodka, if using, until the mixture forms a ball. Divide the ball into  thirds, then combine two of the balls so you end up with 1/3 of the dough for the top and 2/3 of the dough for the bottom. Wrap the smaller ball in plastic wrap and chill. Roll out the larger ball between two pieces of parchment paper. Press gently into a tart pan. Prick crust with a fork to prevent  bubbling.

Press the cherries into the partially baked frangipane. Roll the second crust out between two pieces of parchment paper. Slice into strips. You can weave the lattice if you like; I braided some of the strands. 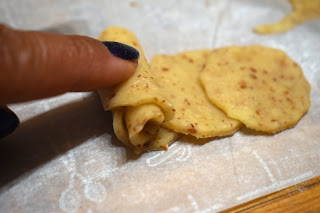 And I even tried my hand at pastry tulips!

Trim any excess dough and press gently at the edge of the pan to attach the strips to the crostata base. 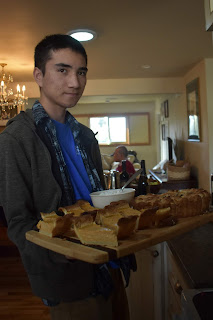 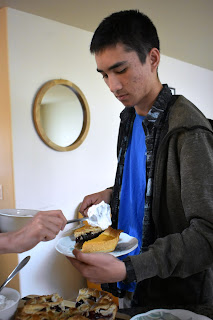 Slice and serve with a dollop of unsweetened whipped cream. This was the final course of our Thanksgiving feast along with R's Butterkin-Cinderella Tourte.