By Camilla M. Mann November 01, 2019
This is a sponsored post written by me in conjunction with the November #ItalianFWT event.
Samples were provided for this post and this page may contain affiliate links. 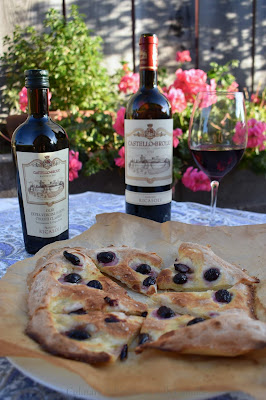 This month Wendy of A Day in the Life on the Farm is hosting the Italian Food Wine Travel bloggers as we turn our sights to Tuscany, specifically Chianti and its Tuscan neighbors. You can read her invitation here. And Jeff of FoodWineClick! was able to obtain samples from Ricasoli* for several in the group. Woohoo. I received a bottle of their olive oil and their 2015 Chianti Classico Gran Selezione.

If you are reading this early enough, join us on Saturday, November 2nd at 8am Pacific time for a live Twitter chat. Use #ItalianFWTso that we can see your comments. Otherwise, take a look at the Italian Food Wine Travel bloggers' virtual trip to Tuscany this month...A Taste of Tuscany's Gran Selezione 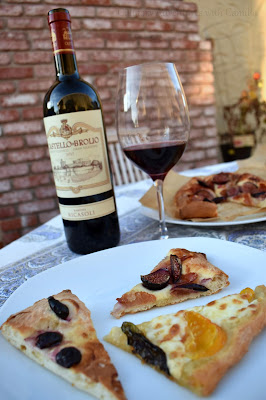 A Chianti wine is any wine produced in the Chianti region of central Tuscany. I grapple with what to write about Chianti and its Tuscan neighbors. There is so much to write and it's something that most people, at least, have an idea about. Chianti was historically associated with a squat bottle enclosed in a straw basket, called a fiasco. However, the fiasco is only used by a few makers of the wine as most Chianti is now bottled in more standard shaped wine bottles.

So, I've decided to stick with some basics of Chianti, then I'll focus on the wine that I tried. First, Chianti is a region in the heart of Tuscany. Red wines produced in the region that are going to bear the name 'Chianti' must contain at least 70% Sangiovese grapes.


There are seven distinct subzones of Chianti with the most popular being Classico and Ruffina. Historically, Chianti Classico is where it all started. Not surprising as it's at the center of the region and all the others radiate from there. Classico has two additional labeling levels: Riserva and Gran Selezione. The former requires two years of aging in the barrel and another three months in the bottle. The latter, the one I want to highlight today, is the newest designation within Chianti Classico only being recognized as recently as 2014.

Chianti Classico Gran Selezione requires the wine to be made with 100% estate fruit with at least 30 months of aging in oak barrels. Additionally, before the wine can be released, it must pass a strict tasting board to confirm that the wine deserves the designation. The label, as its name suggests, is saved for wines that are impressive and special.

This wine, from Castello di Brolio, retails in the United States for $70 and hails from the Gaiole area of Chianti Classico. A blend of 90% Sangiovese, 5% Cabernet Sauvignon, and 5% Petit Verdot, this wine has a deep ruby hue to the eye. On the nose, I got an alluring whiff of fruits layered with hints of earthy vanilla and acidic aged balsamic. On the palate, the wine was elegantly structured and finishes long. I can definitely see how this differs from the tannic wines in those fiaschi! I'm grateful to have had the chance to try it. 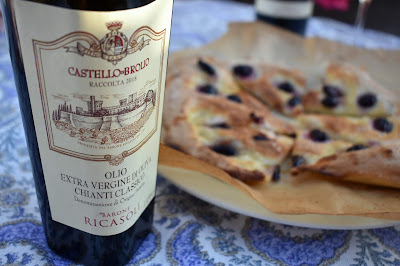 When I was thinking about how to feature the olive oil, I knew that I wanted to keep the flavors simple so that the oil would shine.

Olive trees are one of the oldest cultivated trees in the world. Native to Asia Minor, they spread to Iran, Syria, and the Mediterranean basin nearly six millennia ago. By 3000 BC, olives were being grown in Crete and they were discovered in Egyptian tombs dating back to 2000 BC. Olives spread from the early Greeks to the Romans; and while the Romans pushed the borders of their empire, they brought the olive with them. In more recent years, olives have spread to the Americas, Japan, as well as New Zealand and Australia.

Olive oil is made by pressing olive and separating the oil from the paste. Extra virgin olive oil is cold-pressed which means that it's pressed without heat or chemicals. Remember that heat and light speed spoilage in your oils, so try to keep it away from your stove. And, for maximum freshness, utilize your olive oil within six months of opening the bottle.

A few tips: Try different kinds of olive oil for different dishes and purposes. Think about matching delicate oils with delicate foods and flavors such as seafood or eggs; pair hearty, robust oils with heavier foods that aren't easily overpowered such as meats or spicy foods.

Though the type of olive and region of production affect the resulting olive oil, here are a couple of things to keep in mind, depending on what kind of oil you want. Early harvest olives - usually picked in August - are under-ripe and the olive oil will be greener and more pungent. Late harvest olives - usually picked in late November - are overripe and lean towards buttery.

As I mentioned, the region of origin also affects the olive oil. Spanish oil is typically more golden with a fruity flavor while Italian oil verges on dark green and has herby, grassy notes. Greek olive oil is also, usually, green and borders on a stronger flavor; olive oil from France is often pale in shade and light in flavor.

This oil, from Chianti, was a special gift that the sponsor wanted to send. It's not available for sale in the United States. Grazie mille! 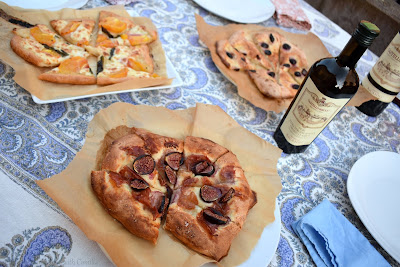 I decided to make some flatbreads with various toppings and a drizzle of this beautiful oil. 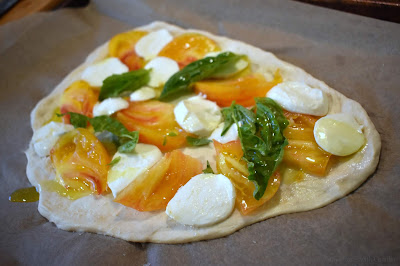 I did a caprese-style flatbread with yellow heirloom tomatoes, fresh mozzarella, and fresh basil. 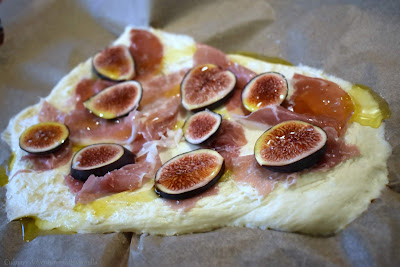 I did another with prosciutto and fresh figs. But the recipe I'm sharing for this event is a slightly less common flatbread: schiacciata all'uva. It's a flatbread made in Tuscany during the grape harvest season. Fitting, I thought. 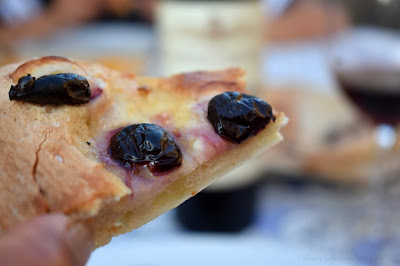 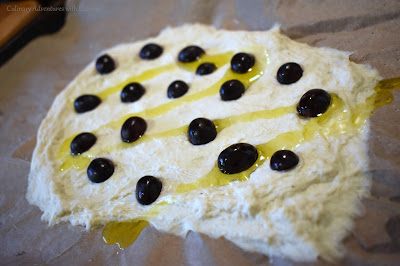 Combine the warm water, yeast and sugar in a small bowl. Let the yeast bloom for 10-15 minutes - until frothy.

In a large mixing bowl, combine the flour, salt, and olive oil with the yeast mixture. Beat with a wooden spoon until the dough comes together. Continue to knead for 5 to 6 minutes until it becomes smooth and soft. Sprinkle with more flour if the dough is really sticky.

Coat the inside of the bowl lightly with olive oil and return the dough to the bowl and turn to coat. Cover it with a dish towel and put it in a warm place until the dough has doubled in size, at least 1 hour.

Stretch the dough to fit the pan. Then press the grapes into the dough. 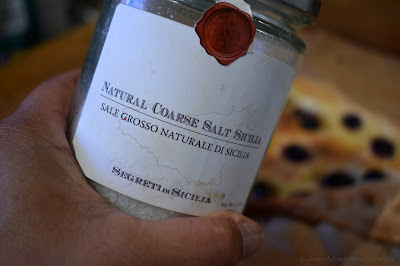 Sprinkle salt over the top, then drizzle with olive oil and red wine, if desired. Put the dough in the warm place until it has doubled in size again, about 30 minutes.

While the dough is in its final rise, preheat the oven to 425 degrees F. Bake the schiacciata for 20 to 25 minutes - until the bread is crisped and golden. Remove from the oven. 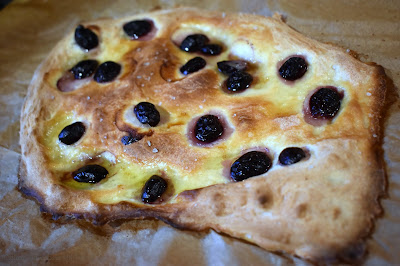 Sprinkle with fresh herbs and more salt. Let cool for at least 5 minutes before slicing. Drizzle with more olive oil before serving. 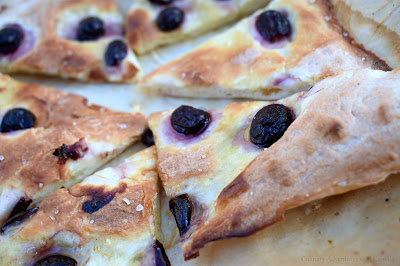