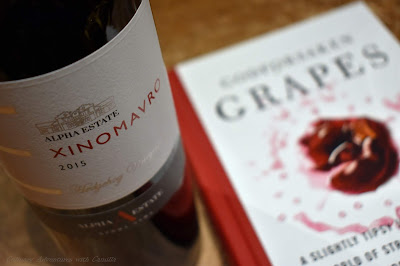 Let's start with this: I love ABBA, I love oddball wines, and I love Greek cuisine.

Now that we have that out of the way, this is my post for May's Food'N'Flix selection. My friend Wendy at A Day in the Life on the Farm invited us to watch Mamma Mia! Here We Go Again*.

Read her invitation here and join the party! Seriously. When doesn't ABBA put a smile on your face?! If you don't know what I'm talking about - Mamma Mia! is a musical based on ABBA songs and the movies are set on the fictional Greek island of Kalokairi.

On the Screen
Mamma Mia! Here We Go Again is a sequel, coming a decade after Mamma Mia!, but it's really a prequel in that it gives the back story of Donna, played by Meryl Streep in the first movie, and how she has three possible dads for her daughter Sophie, played by Amanda Seyfried. The three dads (current age) are played by Colin Firth, Pierce Brosnan, and Stellan Skarsgård in both the original movie and this one.

The younger versions of those men were masterfully cast and charming in their own rights. Hugh Skinner plays the young Harry (Firth) as the world’s most polite punk in a too small leather jacket with atrocious French. But he and Donna, played by the effervescent Lily James, perform an exuberant duet of “Waterloo” in a bistro with dueling baguettes and all.

Then it’s on to her adventure with Bill, the Skarsgård character, played by Josh Dylan as the golden-haired hunk who agrees to sail her to the fictional island of Kalokairi. The Greek island is real; its just not called Kalokairi. James and Dylan perform a fun, flirty rendition of "Why Did It Have To Be Me?" on the boat.

And the young Pierce Brosnan is played by Jeremy Irvine, who squints and broods with enough resolve to let us know that he’s Donna’s true love.Though I hate to write this, both of those men are the weakest singers of the crew. Thankfully, they don't sing much. As I wrote, the directors cast those younger men as perfect matches to their older versions!

Two other things I must note: seeing Firth and Skarsgård approaching the island Titantic-style (think DiCaprio and Winslet!) as everyone on the boats sings and dances to "Dancing Queen" is not to be missed! And then there's the appearance of pop goddess Cher who plays Ruby, Sophie's grandmother. Cher sings a duet - "Fernando" with Andy Garcia whose character's name is Fernando.

Okay, so if you’re down for watching A-list stars belt out ridiculously catchy, four decade old pop tunes in a glorious Mediterranean setting, and you’re willing to throw yourself headlong into the idea of the transformative power of love, you might just thoroughly enjoy watching Mamma Mia! Here We Go Again. Don’t think, just pop in the DVD, and pass the ouzo.

After watching the movie, my ABBA Gold CD has been on repeat. R walked in when I was doing dishes and singing "Dancing Queen", Oh, Mom! I thought you were rewatching that silly movie. I'm glad it's just the music. 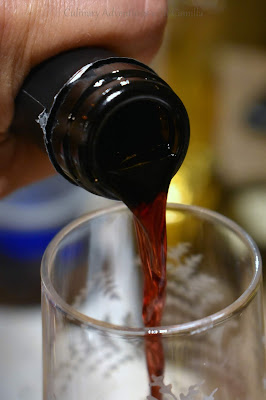 Admittedly, as much as I adored the movie, there wasn't much food inspiration. Both boys watched the movie with me this time around and noted: baguettes, cake, beer, and wine. That's all they really saw. Ehh...none of that was really what I wanted to make. So, I opted to share an oddball Greek wine that I found - Xinomavro.


Over 300 indigenous grapes have been identified throughout Greece, though not all of them are suitable for wine production. Some of the native white varietals are Assyrtiko, the crisp, saline variety of Santorini, along with Roditis, Robola, Moschofilero, and Malagousia. Prominent red varietals include full-bodied and fruity Agiorghitiko, a Nemea-native; Macedonia’s savory and tannic Xinomavro; and Mavrodaphne, most often used produce a Port-like fortified wine in the Peloponnese.

I found a bottle of Xinomavro online at wine.com. The 2015 Xinomavro Hedgehog Vineyard was aged for 12 months in an mixture of new and second-use French oak barrels. With only 12.8% alcohol, I found this wine silky yet fruity with nuances of moist earth and big hits of acidity. It reminded me of Nebbiolo. Delish. 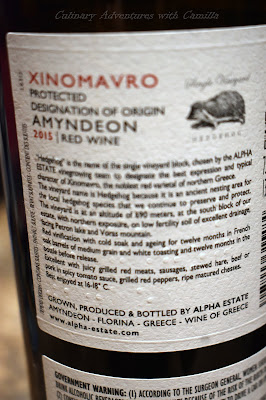 I think this wine would be the perfect match with grilled meats or sausages, stuffed vegetables, and earthy cheeses. Even though I didn't make any new dishes for this post, I wanted to share some of my favorite Greek bites... Garides Saganaki, Bouyourdi (Baked Feta Appetizer), Soutzoukakia and Ellinikos Lemoni Patatas, and, of course, Stuffed Grape Leaves. 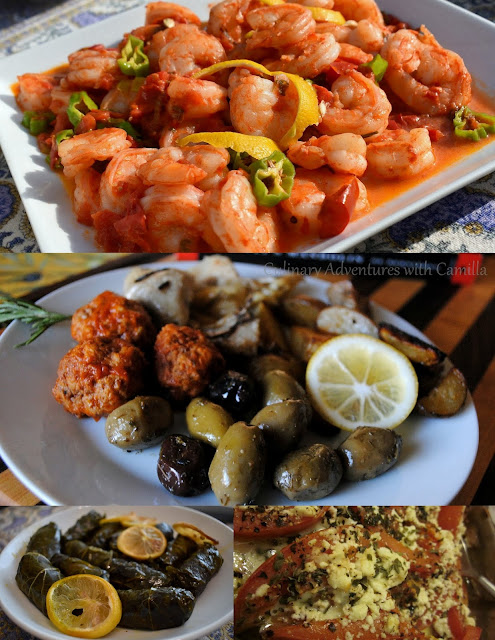 And it's only the first of the month. So, if you want to join the fun, you still have plenty of time to get your ABBA groove on and head to the kitchen. I hope you do.