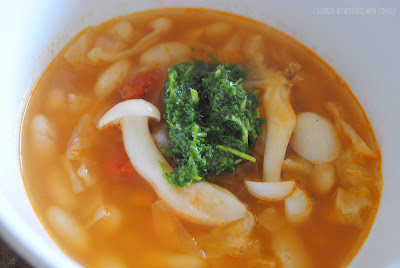 Here we are at the February 2017 event for The French Winophiles, a wine-swilling, food-loving group started by Christy of Confessions of a Culinary Diva and, now, jointly coordinated by Jill of L'occasion and Jeff of Food Wine Click. Here's Jill's full invitation for this month: here.

The French Winophiles are headed to Corsica which is an island in the Mediterranean Sea, west of the Italy, southeast of the France, and just north of the Italian island of Sardinia. In fact, the closest I've been to Corsica is when I was camping on the cliffs above Spiaggia Rena Bianca on the northern tip of Sardinia; I could see Corsica across the water. But that was as close as I came...


The Wines of Corsica

Due to its proximity to Italy, Corsica's winemaking traditions and its grape varieties are Italian in origin though viticulture on the island can be traced back as far as the 6th century BC. The three leading grape varieties of the region are Nielluccio, Sciacarello, and Vermentino.

What the Other Winophiles are Pouring... 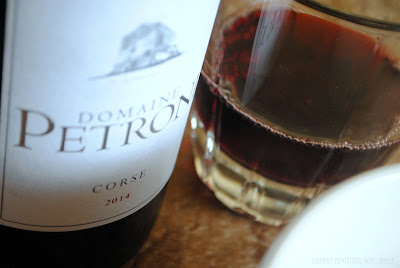 In My Glass...
Many of the group commented that it was challenging to get their hands on a bottle of wine from Corsica. I found my bottle from K & L Wine Merchants for less than $15. Score!

I purchased a red blend from Domaine Petroni, a wine estate on the eastern side of Corsica near Lake Diane. Lake Diane is a famous lagoon, where the local aquaculturists produces oysters and mussels. Now run by the Ramazotti brothers, the vineyards of the estate are a mixture of clay and sandy soils. This red wine blend is comprised of 50% Nielluccio, 35% Syrah, and 15% Grenache. Grapes are fermented in concrete tanks and aged for a year in stainless after that.


I found this a remarkably friendly introduction to the reds of Corsica. Though it opened with a sweet note, it finished dry and light. I loved the herbal and mineral notes in this wine. I will open the next bottle with some spicy sausages and funky cheese, but for this pairing, I opted to make my version of a simple Corsican stew, Fasgioli Incu Funghi (White Bean Stew with Mushrooms). 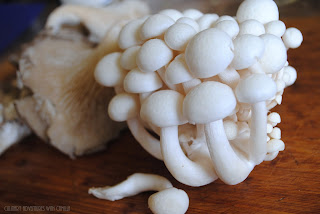 In My Bowl...
It is still soup season here on California's central coast. In fact, given the amount of rain we're having, it might be soup season for quite awhile. This simple bean stew is typical of Corsica's flavorful, unpretentious fare. This is a quick-to-the-table dinner if you use fresh mushrooms and canned beans. 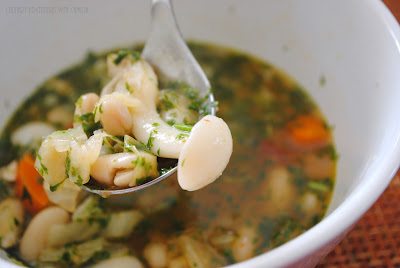 Procedure
In a large soup pot or Dutch oven, melt the butter in olive oil and saute onions until they are softened and translucent. Stir in the carrots and celery and cook until they are softened. Pour in the stock and add in the tomatoes and bay leaves. Bring to a boil. Add in the mushroom and beans. Reduce heat to a simmer and cook until the mushrooms are just softened by still holding their shape, approximately 5 minutes.

Season to taste with salt and pepper. Remove the bay leaves and ladle into individual serving bowls. Top with a tablespoon of fresh pesto if desired. 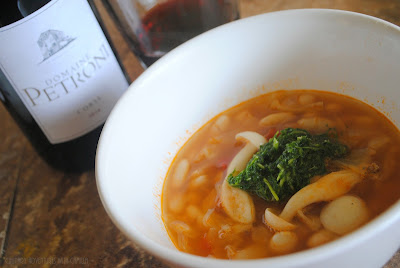 And that's a wrap for Corisca this month. Next month we'll be exploring Champagne. Stay tuned and join us.