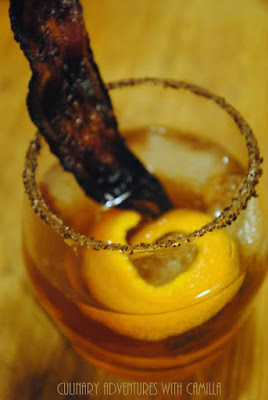 For this round - our February-March selection - of Cook the Books, This month’s book selection was chosen by Claudia from Honey From Rock. She chose Dinner with Edward by Isabel Vincent.* You can read Claudia's invitation: here.

Claudia wrote: "As our last CTBC pick was a memoir about physical healing and the food that helped it to progress, this book is more about the emotional wounded and how cooking can sustain and comfort, as well as how casual acts of kindness can morph into not only friendship but life changes.  Each chapter revolves around a meal, with both menu and delectable recipes." 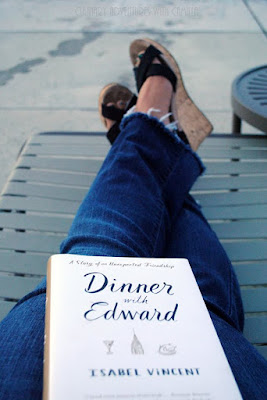 I started reading this one evening while watching my boys at the pool. I finished it in just a few sittings after that. Dinner with Edward is comprised of Vincent's dinners with Edward at a pivotal point in both their lives. Edward's beloved wife, Paula, has just died and Vincent is in the middle of a divorce. They build a friendship over many evenings, many dinners, many conversations, and many cocktails.

Dinner with Edward is a memoir that I have seen characterized as Tuesdays with Morrie - but for foodies. That's an interesting comparison, but oddly, I vastly preferred the latter. Despite the fabulous food in Vincent's book, I had a difficult time liking her or even relating to her.


It was, however, easy to adore Edward.  His devotion to his wife, his old-fashioned views, and his culinary acumen made him absolutely charming.

About His Wife...and Being in Love
"After a few moments of reflection, his blue-gray eyes growing shiny with the beginning of tears, he returned to preparing the oysters. 'She melted my heart,' he said. 'Paradise was me and Paula'" (pg. 100).

And this: "'Is there someone who will stand naked with you in the shower and hold you and comfort you?' he had once said in a hoarse whisper, his words seeming to tumble over one another. 'If you can't do that with the person you're with, then you're not really in love'" (pg. 105).

About His Views...
"At ninety-three, Edward is almost twice my age. Born in Nashville, he likes his bourbon on the rocks, uses words like 'moxie' in conversation, but can also curse like New Yorker. He doesn't own a cell phone or a computer; he writes in longhand, and he never watches television.

'We live in the age of communications but nobody knows how to communicate anymore,' he once said to me. 'It's just emailing and texting, not communicating,' Edward went on. "Nobody's dealing with reality. It's a shame'" (pp. 49-50).

About His Food...
"Edward made his rémoulade in the Louisiana style, with cayenne pepper and mayonnaise, whipping it until the mixture turned a light rose. The creamy, piquant rémoulade enveloped the sweet, firm pieces of steamed fennel. I found it hard to stop eating. Luckily, Edward arrived, clutching a platter of bronzed chicken on a bed of roasted carrots and celery topped with fresh sprigs of thyme and rosemary. He had brined the chicken for two days in apple cider and salt, before rubbing the entire bird with thyme, rosemary, and butter" (pg. 47). 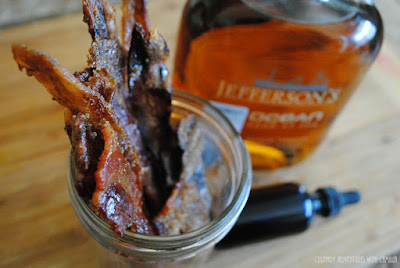 There was ample food inspiration throughout the book, though I longed for a recipe - Edward's recipes. But the menus at the beginning of each chapter were inspiring enough. There were even several culinary terms that I needed to look up.

I was actually inspired to create this cocktail by a couple of different elements in the book. First: the menu for chapter seven.

Bourbon
No ice
No tonic
No lime
Just neat

Second: Edward's adoration of Paula. It seemed that their entire marriage was a honeymoon. So, I set about making a cocktail with bourbon and honey. Oh, and bacon...because bacon makes everything better!

I have a bottle of ocean-aged bourbon that I keep for special occasions. Yep, it's as crazy as it sounds this bourbon is aged on the ocean. I first discovered it when I interviewed a chef in King City who was just opening his restaurant. I wanted to balk and say that it had to be a marketing gimmick. But, I can't.

If you like bourbon, track down a bottle. I think Edward would agree. It's seriously tasty with strongly defined bourbon notes blended with unique, briny characteristics. And while it is pricey, a percentage of each bottle goes towards ocean research. That's a worthy cause in my mind! 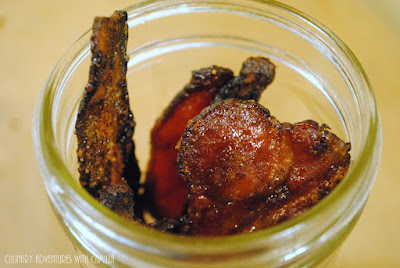 Procedure
Honey-Salt
Place the ingredients in a small mixing bowl and toss to blend. If you think the salt is too coarse, you can give it a few pulses in a spice grinder or use a mortar an pestle. Pour out onto a saucer and set aside.

Candied Bacon
Preheat oven to 400 degrees F. Line a baking sheet with parchment paper and place a wire rack on top of that. In a small mixing bowl, blend all of the dry ingredients together in a small mixing bowl.
Place the bacon on top of the wire rack. Spoon 1 T of the sugar mixture over each piece of bacon and spread evenly over the surface. Place in the preheated oven. Bake for 10 minutes.

Cocktail
Run the orange wedge around the lip of a rocks glass to wet the rim. Dip into the honey-salt, gently shaking off any excess. Set aside.

Place the bourbon, vermouth, honey, and bitters in a cocktail shaker or large mason jar. Top with crushed ice and shake. Strain into the prepared glass and garnish with an orange twist and a strip of candied bacon. Add in an ice cube or two, if desired.


Cheers!
I am also linking this post to Foodie Reads. Here's what everyone else read in February 2017: here.