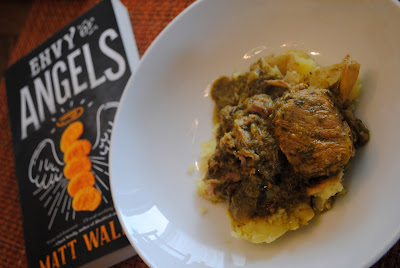 As February moves past its half-way mark, I am forging ahead with my renewed Foodie Reads Challenge. I picked up a copy of Envy of Angels by Matt Wallace* after I saw it mentioned in last month's Foodie Reads collection.

On the Page...
'Delightfully demented.' Those are not two words I would typically string together, but they seem an appropriate label for this book. Readers follow two cooks down a rabbit hole in this kitchen fantasy that feels like a dark, twisted carnival. It's good fun.

Lena and Darren are recruited as the two newest line cooks for Sin du Jour, a catering company who only has one client. "'Sin du Jour has a single client. That client is a branch of the United States government. However, it ain't any branch  you'll ever hear about on CNN or read about on Twitter or whatever-the-hell. It's a branch that deals with...it's like  diplomatic service, except it works with things...folks...like you saw today.'

'Angels and monsters in jars?'

When the team decides to try to fool the dueling clans of demons and replicate angel meat, they find themselves at the corporate headquarters for Henley's, famous for its Chicken Nuggies. They are tasked with stealing the secret recipe...only they find themselves locked in the research and development department with hundreds of reanimated clowns.

An ancient conveyor belt is tilted up to meet Mrs. Henley's manhole cover-sized cloaca. From that gargantuan opening through which a normal chicken would lay its eggs, raw Chicken Nuggies are constantly falling a dozen at a time. They're already formed into their signature circus-themed shapes of breadcrumb hats and oversized floppy shoes" (pp 158-159).

As I said: delightfully demented. If you want an urban fantasy set in a foodie world, give this one a shot. I was laughing and cringing at the same time. 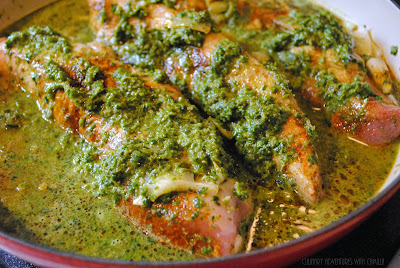 On the Plate...
I toyed with the idea of making Chicken Nuggies. But, well, I thought that would be a waste of chicken. My mini food snobs would turn their noses up at that one. Instead, I was inspired by the passage where Lena and Nikki are trying to come up with a way to pass off fake angel wings.

"Since Ramiel's wings, and presumably all angel wings, possess no actual meat, they're experimenting with turning potatoes and fried dough into some type of crisp that looks like the plucked husk of Ramiel's feathers.

'I do a pretty wicked herb dip that might work.'

Okay, mine wasn't quite that hot, but I loved all the herbs in this braised pork dish. 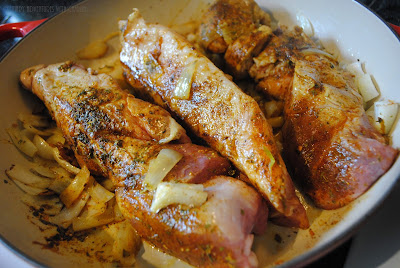 *You really just need 3 cups of liquid. You can use any combination of stock, water, and wine that you wish.

Place toasted cumin seeds, coriander seeds, dried oregano and dried rosemary in a mixing bowl. Roll the pork pieces in the spice mixture, coating all sides as much as possible. Rub the spices in and set aside.

Melt butter in olive oil in a Dutch oven or other pot with a tight fitting lid. Add pork and sprinkle with salt and pepper. Brown meat on all sides, approximately 1 to 2 minutes per side. The more you let it brown, the better the flavor!

Add onions, parsley, cilantro, green chiles, bay leaves, and chimichurri to the pot. Pour in the stock/water/wine mixture. Bring the mixture to a boil. Then cover and reduce heat to a simmer. 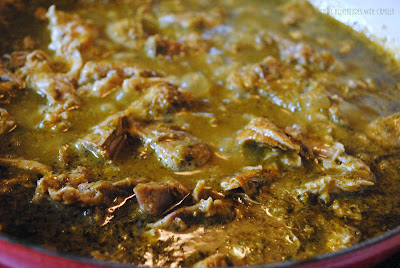 Let the meat braise for 90 to 120 minutes; I usually go the full two hours. The pork should be tender and easy to break apart. Break the meat into chunks.

Remove the pork and boil the remaining cooking liquid until reduced by half. Return the pork chunks to the pot and stir to coat completely. Season to taste with hot sauce, if desired. 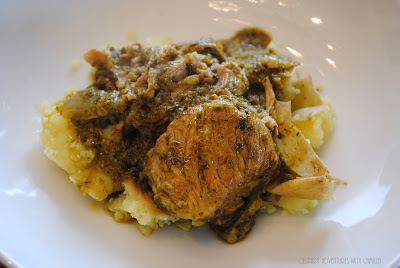 Serve over cooked couscous, rice, or potatoes. I served this batch over smashed potatoes. 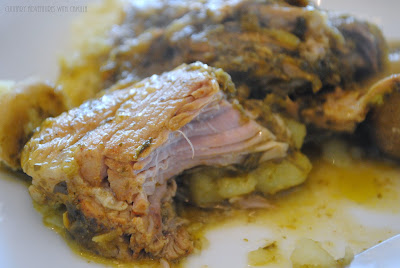 Here's what everyone else read in February 2017: here.