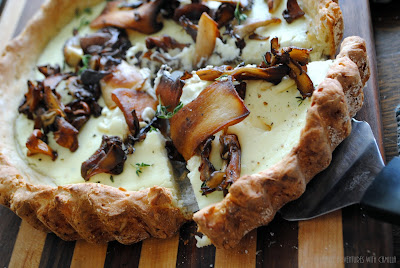 Here we are at the October event for The French Winophiles, a wine-swilling, food-loving group coordinated by Christy of Confessions of a Culinary Diva. We've made it around France. And by clicking on the following regions you can read my recipe post that includes the #winophiles round-up as well. So far, we've traveled - by tabletop and goblet - to the Loire Valley, Corsica, the Southwest, Languedoc-Roussillon, Bordeaux, Champagne, Burgundy, Alsace, Médoc, and Côtes du Rhône.

Once we made the rounds, we began to revisit the regions with a little more specificity. So, in September, the crew headed to the Graves region in Bordeaux. And this month, we're headed to the Jura.


The Conversation
Join us for a live Twitter Chat Saturday, October 15th at 11 am EST/8 am PCT. You may join in the revelry by following hashtag #winophiles.

Here's where we're headed next: November 19th – Cahor and Beaujolais. Join us for our upcoming events by emailing your post title to Christy at culinarydiva@icloud.com or Jill at jillbarth@msn.com.  A Vôtre Santé!

The Rest of the #Winophiles listed alphabetically by post title

I looked high and low for a wine from the Jura. To read a little bit about the region, I posted a preview about the Jura for the group. Read it: here.

Not much luck in locating a Jura wine for me. Definitely nothing locally. But, online, I located a Vin Jaune that was described as 'intense and pungent'. I'm down with intense and pungent, so I clicked buy and waited.

Vin Jaune has an atypical production made from an unusual grape, Savagnin. And some people don't actually think it qualifies as a wine as it is a white wine blended with brandy. Talk about potent! 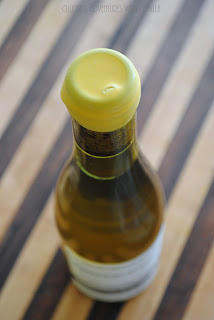 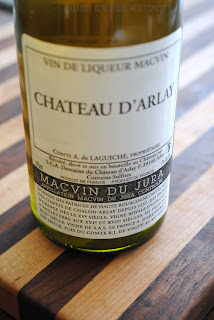 In addition to its distinctive taste, Vin Jaune has a distinctive look. It's bottled in unusual, squat bottles, called 'clavelins' that hold 62 centiliters instead of the standard 75 centiliters. That amount, it's said, is the amount of Vin Jaune left from one liter of fermented grape juice at the time of bottling with the rest being lost to evaporation. The clavelins are topped with an old-fashioned yellow wax seal. It's very elegant. 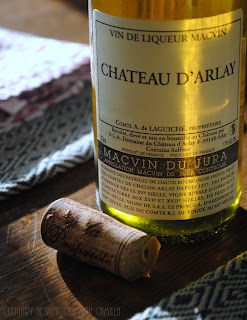 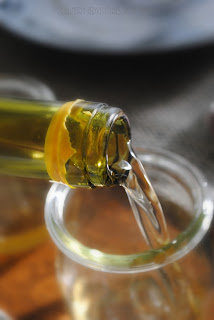 The wine I found was a non-vintage Macvin Du Jura from Chateau d'Arlay that was cask-aged for over seven years. A powerhouse sip, it packed a punch being 17% alcohol. Described as intense and pungent, I concur with the intensity but wouldn't consider it pungent. 'Unctuous', yes. 'Pungent', not so much. But it was intense in a show-stopping way as long as you like a sweet wine. 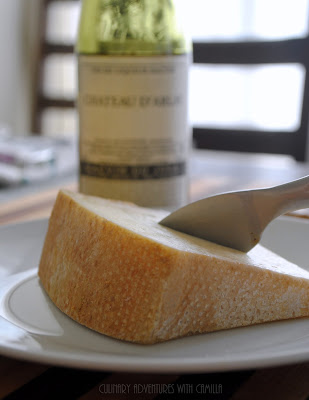 Comté
When I was trying to decide what to pair with my Vin Jaune, I thought I'd try two things. Both hail from the same area so this was definitely a 'what grows together' kinda pairing.

First up: a cheese pairing. The Jura is also home to Comté. The rich flavor of Comté complemented the wine as they seemed equally intense in their fruity, nutty, yeasty, and spicy notes. 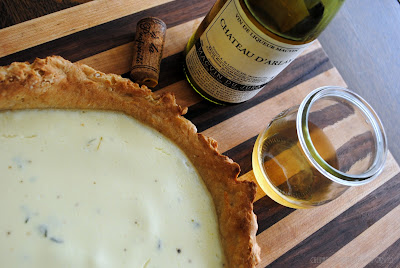 Toétché
Then I found a regional dish that's a rustic cream tart. And since wild mushrooms abound in the Jura, I decided to make a Toétché and top it with crisped mushrooms. I only found a recipe in French, but my French is not so rusty that I couldn't bungle through. Also, I needed to make mine gluten-free so my husband could indulge. So, this is definitely not a traditional Toétché. But it was delicious and a great match for the wine. 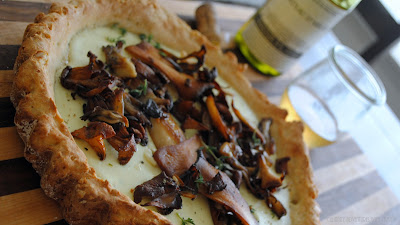 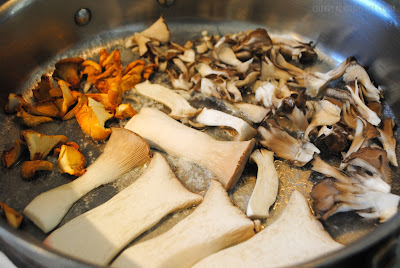 Melt the butter in the milk until slightly more than warm to the touch. Sprinkle the yeast on the top and let bloom for 5 minutes. Mix in the remaining ingredients with a wooden spoon. Cover with a cloth and let rise from 45 to 60 minutes.

After the dough has risen, press the dough into the bottom and up the sides of a tart pan with a removable base. Parbake the crust for 5 to 7 minutes - just so that it's no longer sticky at the bottom.

Filling
While the crust parbakes, whisk together the filling ingredients. Return the tart to the oven and bake for an additional 20 minutes.

Topping
While the tart bakes, make the topping. Melt butter in a large, flat-bottom pan. When the butter begins to brown, lay your mushrooms in the pan. Make sure that you can see the bottom between the mushrooms and that the mushrooms aren't touching.


Let the mushrooms brown and crisp. Flip the mushrooms and crisp them on the other side. Only after they are crisp should you season them. Adding salt when they are cooking will lead to soggy mushrooms. Season to taste with salt and pepper.

To Serve
Let the tart cool for at least 10 minutes before remove the sides of the tart pan. Spread the crisped mushrooms over the top and serve in generous wedges. 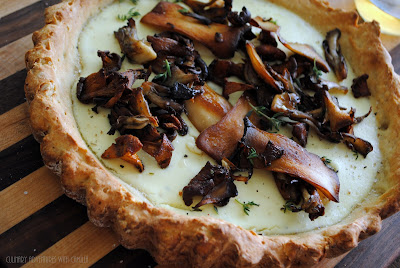