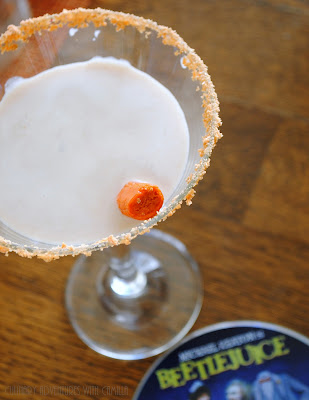 Deb of Kahakai Kitchen is hosting our October Food'N'Flix event; she asked us to watch - or rewatch - Beetlejuice. Here's her invitation.

Deb writes, "I'll be the first to admit that it is not the foodiest of films, but based on the creative Halloween fun we had with Hocus Pocus last October, it seemed liked the perfect pick. I just watched it again for the food and while not plentiful, it can be found--on the kitchen counters, Chinese (Cantonese) food in boxes, coffee, tea, and alcohol, the prepping of produce for the famous dinner party with a gnarly shrimp cocktail for starters. Plus, knowing the creativity of this group, I have no doubt you will find inspiration in the colorful set, crazy sculptures and monsters, and even the Calypso music."

On the Screen...
I haven't seen this movie since I was in high school. Probably. Here's a quick synopsis in case it's been awhile for you, too.

A young couple in New England - Adam and Barbara, played by Alec Baldwin and Geena Davis, respectively - dies in a car crash and returns to their home to discover that it's been purchased by a family from New York.

Initially, Adam and Barbara don't realize that they're (1) dead and (2) invisible to most people. Lydia, the angst-ridden teenage daughter of the new owners can actually see them.

All the couple has to help them adjust to the afterlife is a heavy tome entitled The Handbook for the Recently Deceased, a case worker who will only see them a few times, and the lascivious Betelgeuse, played by Michael Keaton, who claims he can help make you happier with eternity. One of the most memorable scenes is when Betelgeuse compels the Deetzes, and their dinner guests, to perform an involuntary group lip-sync of Harry Belafonte's 'Day-O'. Hilarious. But the Deetzes don't scare easily.

I think the charm of Beetlejuice is that it's completely bizarre. It was the perfect pick for a Halloween movie. Thanks, Deb, for the nudge. I doubt I would have watched that movie again without your invitation.

For this post, I was inspired by a scene about 30 minutes in to the movie when Keaton's character finds himself imprisoned in a miniature of the town. He tries to attract a fly with a Zagnut candybar. There was something about that scene that grabbed me. Maybe it's because I haven't seen a Zagnut in almost thirty years. 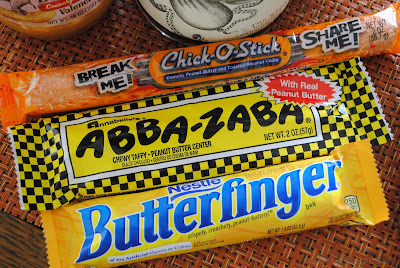 I tried to find a Zagnut - to no avail. Well, I did locate them online, but there was no way I was spending $20 on candy plus shipping for something I probably wasn't going to enjoy anyway. So, I headed to a local candy store and found some similarly flavored alternatives. Since Zagnuts are crunchy peanut butter covered in coconut, I think that the Chick-O-Sticks are the most similar; the Abba-Zaba has the peanut butter element as does the Butterfinger though that is shrouded in chocolate. I grabbed them all for good measure. 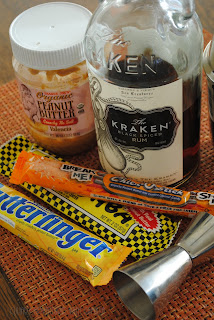 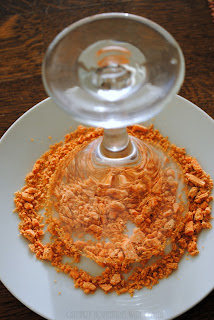 In the Glass...
So, which all those flavors in mind, I whipped up this tasty libation. My husband liked it so much he asked for a second one; I told him I'd make him another if he came up with a name for it. He tried different variations that included coconut, Caribbean, Kraken, and more before settling in 'Spooky Juice.' Okay.

Our boys were so excited to get candy "when it's not even Halloween!" 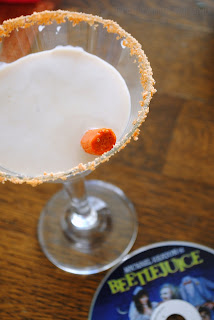 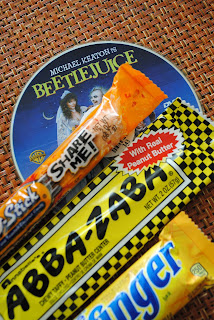 Procedure
Crush a Chick-O-Stick with a mortar and pestle and place the pieces on a saucer. Moisten the rim of your glass and press it into the shards of Chick-O-Stick. Set aside.

In a cocktail shaker, place ice cubes, peanut butter, rum, and coconut milk. Shake to combine, then strain into your prepared glass. 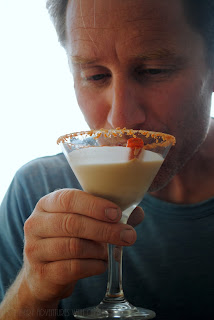 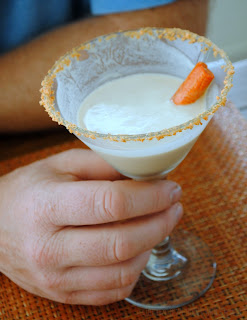